On November 16, 2017, Real Salt Lake of Major League Soccer announced that it had acquired a franchise in the National Women's Soccer League. [1] On November 20, 2017, the league announced that FC Kansas City of the National Women's Soccer League would fold their club, and the team's player contracts, draft picks, and other rights would be transferred to the new Salt Lake City club. [2] As of August 2017 [update], Utah's six Division 1 women's soccer teams outnumber the men's [3] [4] and the state has the highest rate of girl high school soccer players recruited by Division 1 colleges. [5] Attendance at Division 1 women's soccer games in Utah is among the highest in the NCAA. [5] The decision to bring a NWSL team to Utah was based on the established interest in men's soccer in the state as well as Dell Loy Hansen's gut feeling and longtime interest in a team. [5]

The team was officially launched on December 1, 2017 with the announcements of its name, branding, season tickets, and social media. [7] The badge features a gold Lioness head and “Claret Red”, “Cobalt Blue” and “Victory Gold” colors. Two stylized balls surround the name “UTAH ROYALS FC” in the lower half of the badge which represent the team's connection to the organization's MLS and United Soccer League teams. [8] Rio Tinto Stadium was named as the team's playing ground. [9] By the end of December 2017 over 2,000 season tickets had been sold. [10] By early April 2018, the number of season tickets sold had increased to 5,000. [11]

Gunnhildur Yrsa Jónsdóttir scored the first goal in franchise history on March 24, 2018 in the third minute of the club's inaugural match against Orlando Pride in Orlando. [12] 18,500 tickets were sold ahead of their first home match (with only club seats and standing-only tickets remaining). [13] Official attendance the day of the match, in which they played the Chicago Red Stars, was reported as 19,203. [14]

In February 2018, the Royals announced a three-year multimillion-dollar deal with Conservice, a utility company based in Logan, Utah. [15] The company's logo is featured on the front of the team's jerseys. [16] Utah announced a multi-year partnership deal with Young Living Essential Oils on April 2, 2019. The Young Living partnership will include an original video series called ‘Rise up to Royalty’ which profiles URFC players personal lives. This 12-episode series, will run throughout the course of the 2019 season. [17] 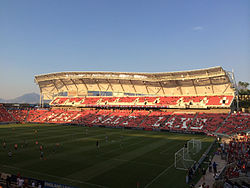 The Utah Royals announced that all matches in 2018, except for their six NWSL Game of the Week appearances on Lifetime, would be broadcast locally on KMYU My Utah TV and streamed on the KSL app, as an extension of the broadcast rights agreements with Sinclair Broadcast Group and KSL with Real Salt Lake. [24] KALL ESPN 700 would carry the majority of Royals games on local radio – as it does for Real Salt Lake and Real Monarchs. [24] On August 17, 2018, KSL announced that Utah Royals games would no longer be broadcast on television or radio, but they would continue to be streamed on the KSL website and app. [25]