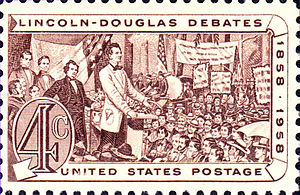 The United States Senate elections of 1858 and 1859 were elections which had the Republican Party gain five additional seats in the United States Senate, but the Democrats retained their majority. That majority would erode in 1860 with the secession of the southern states leading up to the Civil War. In Illinois, incumbent Stephen A. Douglas (D) and challenger Abraham Lincoln (R) held a series of seven debates, known as the " Lincoln–Douglas debates."

As this election was prior to ratification of the seventeenth amendment, Senators were chosen by State legislatures.

As a result of the elections

Special elections during the 35th Congress

In these elections, the winners were seated during 1858 or in 1859 before March 4; ordered by election date.

Races leading to the 36th Congress

In these general elections, the winners were elected for the term beginning March 4, 1859; ordered by state.

All of the elections involved the Class 2 seats.

Race leading to the 37th Congress

In this general election, the winner was elected for the term beginning March 4, 1861.

This election involved a Class 3 seat.

Elections during the 36th Congress

In this election, the winner was elected in 1859 on or after March 4; ordered by date.

The October surprise of the election was the endorsement of the Democrat Douglas by former Whig John J. Crittenden. Non-Republican former Whigs comprised the biggest block of swing voters, and Crittenden's endorsement of Douglas rather than Lincoln, also a former Whig, reduced Lincoln's chances of winning. [5]

On election day, as the districts were drawn to favor Douglas' party, the Democrats won 40 seats in the state house of Representatives, and the Republicans won 35. In the state senate, Republicans held 11 seats, and Democrats held 14. Stephen A. Douglas was reelected by the legislature, 54–46, even though Lincoln's Republicans won the popular vote with a percentage of 50.6%, or by 3,402 votes. [6] However, the widespread media coverage of the debates greatly raised Lincoln's national profile, making him a viable candidate for nomination as the Republican candidate in the upcoming 1860 presidential election. He would go on to secure both the nomination and the presidency, beating Douglas (as the Northern Democratic candidate), among others, in the process.

Lincoln also went on to be in contact with editors looking to publish the debate texts. George Parsons, the Ohio Republican committee chairman, got Lincoln in touch with Ohio's main political publisher, Follett and Foster, of Columbus. They published copies of the text, and titled the book, Political Debates Between Hon. Abraham Lincoln and Hon. Stephen A. Douglas in the Celebrated Campaign of 1858, in Illinois. Four printings were made, and the fourth sold 16,000 copies. [7]