Table of Contents ⇨
Zone in US waters designated for special protection

A U.S. National Marine Sanctuary is a zone within United States waters where the marine environment enjoys special protection. The program began in 1972 in response to public concern about the plight of marine ecosystems.

Designation as a National Marine Sanctuary does not automatically prohibit fishing and other activities. Recreational and commercial fishing is allowed in some sanctuaries. It is possible to restrict consumptive or destructive activities through the initial designation process and NMSP actions.[ citation needed] There are restrictions in some sanctuaries that are enforced by other governing agencies. For example, current regulations restricting fishing in Stellwagen Bank were not issued by the NMSP, but rather by NOAA Fisheries and the New England Fishery Management Council, which have jurisdiction in federal waters off the New England coast generally. [4] The private non-profit Marine Conservation Institute has compiled fact sheets for each sanctuary listing activities which are directly regulated by the NMSP. [5] 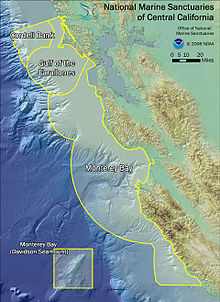 Diagram illustrating the orientation of the 3 marine sanctuaries of Central California: Cordell Bank, Gulf of the Farallones, and Monterey Bay.