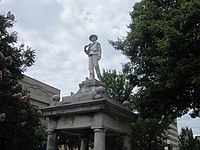 Union County is a county located on the central southern border of the U.S. state of Arkansas. As of the 2010 census, the population was 41,639. [1] The county seat is El Dorado. The county was formed on November 2, 1829, and named in recognition of the citizens' petition for a new county, which said that they were petitioning "in the spirit of Union and Unity." The county is directly adjacent to the south to Union Parish in the state of Louisiana.

Called by boosters the "Queen City of South Arkansas", El Dorado was at the heart of the 1920s oil boom in South Arkansas. More recently, the city has been called "Arkansas's Original Boomtown," as it emphasizes its historic assets for heritage tourism. [2] The chemical and timber industries became important during and after World War II, and still have a place in the economy.

Union County was formed on November 2, 1829, from portions of Clark and Hempstead counties. Areas along the waterways were originally developed for cotton plantations in the antebellum years, and planters depended on large groups of enslaved African-American workers to generate their profits.

On January 10, 1921 Dr. Samuel T. Busey hit oil with a well about a mile south of El Dorado, leading to an oil boom that attracted thousands of workers and speculators. His first well produced for fewer than two months, but by 1923, "El Dorado boasted fifty-nine oil contracting companies, thirteen oil distributors and refiners, and twenty-two oil production companies. The city was flooded with so many people that no bed space was available for them, leading to whole neighborhoods of tents and hastily constructed shacks to be erected throughout the city. The city's population reached a high of nearly 30,000 in 1925 during the boom before dropping to 16,241 by 1930 and rising to 25,000 by 1960." [3] Oil production fell markedly in the early 1930s, in part due to companies' financial difficulties during the Great Depression. It recovered later in the decade.

During World War II, chemical plants were established in the county, but their production declined after the war. Exploitation of Arkansas forests led to growth in the timber industry in the county. Oil, chemical and timber industries are still important to the economy, although in lesser proportion.

According to the U.S. Census Bureau, the county has a total area of 1,055 square miles (2,730 km2), of which 1,039 square miles (2,690 km2) is land and 16 square miles (41 km2) (1.5%) is water. [4] It is the largest county by area in Arkansas. Union County, along with Columbia County, has the largest bromine reserve in the United States. The lowest point in the state of Arkansas is located on the Ouachita River in Union County and Ashley County, where it flows out of Arkansas and into Louisiana. 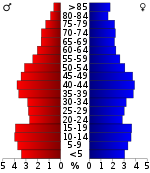 Over The past few election cycles Union County has trended heavily towards the GOP. The last democrat (as of 2016) to carry this county was Bill Clinton in 1996.

Townships in Union County, Arkansas as of 2010

Townships in Arkansas are the divisions of a county. Each township includes unincorporated areas; some may have incorporated cities or towns within part of their boundaries. Arkansas townships have limited purposes in modern times. However, the United States Census does list Arkansas population based on townships (sometimes referred to as "county subdivisions" or "minor civil divisions"). Townships are also of value for historical purposes in terms of genealogical research. Each town or city is within one or more townships in an Arkansas county based on census maps and publications. The townships of Union County are listed below; listed in parentheses are the cities, towns, and/or census-designated places that are fully or partially inside the township. [13] [14]