From Wikipedia
(Redirected from U.S. Route 54 in Illinois)
https://en.wikipedia.org/wiki/U.S._Route_54_in_Illinois

U.S. Route 54 (US 54) is an east–west United States highway that runs northeast–southwest for 1,197 miles (2,115 km) from Griggsville, Illinois to El Paso, Texas. It enters and leaves Texas twice. The Union Pacific Railroad's Tucumcari Line (former Southern Pacific and Rock Island Lines "Golden State Route") runs parallel to US-54 from El Paso to Pratt, Kansas, which comprises about two-thirds of the route.

US 54 begins in El Paso at Loop 375 downtown. (US 54/Patriot Freeway) The highway serves as a major freeway for the Metro area's network, running north–south along the city's eastern slope of the Franklin Mountains range. The highway runs through the city for approximately 20 miles (32 km) before reaching the New Mexico state line. Within the network, it is a military connector for Fort Bliss and Holloman Air Force Base.

US Route 54 through New Mexico

US 54 enters New Mexico in Chaparral as part of the El Paso, Texas Metro area network. It also serves as a military highway to connect Fort Bliss in El Paso to Holloman Air Force Base in Alamogordo, New Mexico (via U.S. Route 70). The speed limit is 70 mph on the divided highway section upon entering the state to approximately 10 miles (16 km) south of Alamogordo, with a 35 mph zone in Orogrande. Upon entering Alamogordo, US 54 becomes concurrent with U.S. Route 70. US 54/US 70 then intersects the beginning of U.S. Route 82 at the north end of Alamogordo (near La Luz). The limit is 60 mph from Alamogordo to Tularosa and 55 mph north of Tularosa, where the concurrency with US 70 ends, and the highway reverts to being two lanes wide and not divided. The highway runs north through the central portion of the state, passing through Carrizozo and intersecting U.S. Route 380. The route then turns northeast before passing through Vaughn. Upon entering Vaughn, the route is briefly concurrent with U.S. Route 60 and U.S. Route 285. In Vaughn, US 285 splits off to the south. Exiting Vaughn, US 60 splits off to the southeast, and the route continues northeast to Santa Rosa where it becomes concurrent with Interstate 40. The I-40 concurrency lasts for 59 miles (95 km) to Tucumcari. The highway then exits the state back into Texas at Nara Visa. The highway runs for 354 miles (570 km) in New Mexico, and is signed as a north–south route through the state.

The highway re-enters the Texas Panhandle just beyond Nara Visa, New Mexico, and continues northeast for 92 miles (148 km) to the Oklahoma border. Major Texas cities along US 54 in the panhandle are Dalhart and Stratford. 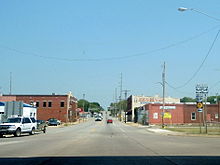 US-54 enters the state from Oklahoma in Seward County, and travels through the cities of Liberal and Plains, where it begins a concurrency with US-160 in Meade County. Just east of the city of Meade, US-54 splits from US-160 and continues in a northeasterly direction through Meade and Ford counties before beginning a long concurrency with US-400 in Mullinville in Kiowa County.

The highway then travels through the town of Greensburg and continues as a two-lane road through Pratt, Cunningham, and Kingman. At Pratt, the Union Pacific railroad tracks which paralleled the highway for over 600 miles from El Paso turn to the northeast (towards Topeka) and leave US-54. The road becomes a divided highway in eastern Kingman County. From Kingman to Garden Plain in Sedgwick County it is a freeway but becomes an at-grade expressway as it passes through Goddard and approaches Wichita.

The freeway resumes as the road crosses the city limits of Wichita near Wichita Dwight D. Eisenhower National Airport. In Wichita, US-54/400 is known as Kellogg Avenue, and has junctions with Interstate 235, Interstate 135 and Interstate 35, the Kansas Turnpike, before a junction with K-96. The Kellogg Avenue freeway has six lanes and extends 14 miles (21 km) from 111th Street on the west side of Wichita to Weideman just after the I-35/Kansas Turnpike interchange on the east side. Upgrading of Kellogg Avenue from a surface arterial to a freeway has been underway since the mid-1980s, with the latest interchange project opening in late 2009. The road gets its name from Milo Bailey Kellogg, a shopkeeper and Civil War veteran who was the city's first civilian postmaster in 1870.

The concurrency of US-54 and US-400 continues through Augusta in Butler County before US-400 heads east toward the Missouri state line, while US-54 forms a brief concurrency with US-77 through El Dorado. At El Dorado, US-54 continues its easterly course through rural areas in Greenwood and Woodson counties before passing through the cities of Iola and Fort Scott, with US-77 heading north to Junction City. US-54 exits Kansas in Bourbon County before reaching Nevada, Missouri.

In Missouri, US 54 runs from the southwest portion of the state to the northeast. It is a major conduit through the Ozarks and is the primary access road to Pomme de Terre Lake and Lake of the Ozarks. After entering the state it passes through Nevada, El Dorado Springs, Hermitage, crossing Lake of the Ozarks the first time just north of Ha Ha Tonka State Park. It passes through Camdenton and crosses the lake a second time on the Grand Glaize Bridge at Osage Beach before bypassing Eldon and going through Jefferson City, where it crosses the Missouri River via the Jefferson City Bridge and briefly overlaps U.S. Route 63. Just north of the bridge, it splits passing through Fulton, crossing Interstate 70 at Kingdom City, bypassing Mexico, sharing a concurrency with Highway 19 through Laddonia, passing just north of Vandalia, and ultimately crossing the Mississippi River via the Champ Clark Bridge into Illinois at Louisiana.

In the state of Illinois, U.S. 54 runs from the Champ Clark Bridge over the Mississippi River to its terminus at Interstate 72 northeast near Griggsville. Before the eastern terminus was cut back to I-72, U.S. 54 continued northeast via several existing roads, including the current Illinois Route 54, Illinois Route 50, and Governors' Highway, into downtown Chicago, where it ended at Michigan Avenue and Lake Shore Drive. It is a rural, two-lane surface street for its entire length in Illinois. In the state of Illinois, U.S. 54 is 23.96 miles (38.56 km) long. [2]

US 70 in Alamogordo. The highways travel concurrently to Tularosa.

US 60 / US 285 southwest of Vaughn. The highways travel concurrently to southeast of Vaughn.

US 84 in Santa Rosa. The highways travel concurrently through the city.

US 412 in Guymon. The highways travel concurrently through the city.

US 64 in Guymon. The highways travel concurrently to Hooker.

US 160 east of Plains. The highways travel concurrently to east of Meade.

US 400 east of Mullinville. The highways travel concurrently to Pickrell Corner.

US 183 west of Greensburg

US 77 in Augusta. The highways travel concurrently to El Dorado.

US 75 in Yates Center

US 69 north of Fort Scott. The highways travel concurrently to Fort Scott.

US 61 north of Bowling Green