Table of Contents ⇨
This article is about the section of U.S. Route 14 in Illinois. For the entire route, see U.S. Route 14.

In the U.S. state of Illinois, U.S. Route 14 (US 14) is a major arterial that runs southeast from the Wisconsin state line north of Harvard, Illinois to the north side of Chicago at U.S. Route 41. 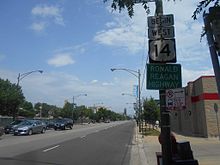 Where U.S. Highway 14 crosses Interstate 294 is an unusual intersection where all four street names change. From the south is Northwest Highway coming out of Park Ridge and Chicago; from the north is Rand Road. U.S. Highway 14 continues straight west but no longer as Dempster Street, but now as Miner Street. Miner Street begins a northwesterly direction into downtown Des Plaines crossing two intersections of U.S. Routes 45 and 12. The name Miner Street changes to Northwest Highway after going under a wooden railroad underpass on a large S-curve. U.S. Route 14 continues for most of the rest of its length northwest to Wisconsin designated as Northwest Highway.

Before the late 1930s, U.S. Route 14 followed present-day IL 31 south of Crystal Lake, IL 72 east of West Dundee, Nagle Avenue, and Addison Street before terminating at Lake Shore Drive (US 41). [4] In the late 1930s, the designation was rerouted to follow most of its current designation which directly connected to Park Ridge and Niles via Busse Highway and Center Street (now Touhy Avenue) before reaching Caldwell Avenue. [5] Between 1952 and the late 1970s, U.S. Route 14 continued towards Foster Avenue to Lake Shore Drive, where it then turned south. It left Lake Shore Drive for Michigan Avenue and intersected U.S. Route 66. [6] [7] It terminated at what was then U.S. Route 20 before it was rerouted away from Chicago Loop.