Table of Contents ⇨
For other universities that use the UT mnemonic, see UT.

The University has been placed in the top 400 universities in the world by three major ranking tables. The UT was ranked 65th in the Reuters's 2017 European Most Innovative Universities, and, 184th worldwide in 2019 according to the Times Higher Education magazine. [3]

The Dutch government's decision to locate the country's third technical university in Enschede, the main city of Twente, had much to do with the north-eastern province's rich manufacturing industry (textiles, metal, electrical engineering, chemicals). Another important consideration was the fact that the local economy needed a boost to compensate for the dwindling textile industry. Just as the fact that the municipality of Enschede made the Drienerlo estate available for the first campus University of the Netherlands. [4] [5] 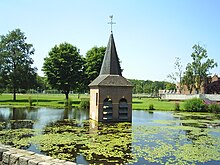 Drienerlo tower on the campus

The University of Twente was built on the former country estate of Drienerlo, situated between Hengelo and Enschede. The 140-hectare estate consists of woodland, meadows and water. Architects Van Tijen and Van Embden designed the first — and so far only — Dutch campus university along American lines where students and staff live, work and pursue their leisure activities on campus. [6] The Student Union, which is run entirely by students, manages several premises, including the student social centre in Enschede. [7]

The current director of the university is professor Thom Palstra. The other two members of the executive board are Victor van der Chijs (President Executive Board) and Mirjam Built-Spiering (Vice-President) [8]

There are five Faculties at the University of Twente, each Faculty is in turn organized into several departments:

Next to the programmes administered by the faculties mentioned above, University College Twente offers the broad honours BSc programme in Technology and Liberal Arts and Sciences, or ATLAS for short, and the Twente Graduate School offers post graduate education (PhD and PDEng). [9] Since 2019, this study is part of the faculty ITC.

The University of Twente has the following faculties with corresponding bachelor- and master programmes:

"Het Ding" "(The Thing)", by Jasper Latté and Jaap Hos

The degree programs at the University of Twente range from business administration and psychology to applied physics, engineering and biomedical technology.

In the applied sciences, the emphasis is on nanotechnology, process technology, engineering, information and communication technology, and the biomedical sciences.

So far, the UT has produced over 1,000 spin-off companies; more than any other Dutch university. [10] UT is also one of the founders of Novel-T, formerly Stichting Kennispark Twente, a startup accelerator and support program for university spin-offs. [11] [12]

The Webometrics Ranking of World Universities (2016) ranked the University of Twente 215 overall in the world and 75 in Europe. [19]

The 2016 QS World University Rankings ranked the University of Twente 177 overall in the world. [20]

In 2016 Academic Ranking of World Universities (ARWU) ranked the University of Twente 301-400 overall in the world. [23]

In 2015 the University of Twente was ranked as the most entrepreneurial university in Netherlands and also voted the Dutch university most successful in commercializing scientific knowledge. [24]