Tuscaloosa County is a county in the west central portion of the U.S. state of Alabama. [1] As of the 2010 census, its population was 194,656 [2] (estimated at 208,911 in 2018 by the United States Census Bureau). Its county seat and largest city is Tuscaloosa, the former state capital from 1826 to 1845. [1] [3] The county is named in honor of Tuskaloosa, a paramount chief of the Mississippian culture, who are considered ancestors of the historic Choctaw people of the region. [1] [4]

Tuscaloosa County is included in the Tuscaloosa, AL Metropolitan Statistical Area. The county is the home of the University of Alabama, Shelton State Community College, and Stillman College.

Tuscaloosa County was established on February 6, 1818. During the antebellum years, the principal crop was cotton, cultivated and processed by African-American slaves. By 1860, shortly before the state seceded from the Union, the county had a total of 12,971 whites, 84 "free" African Americans, and 10,145 African-American slaves; the latter comprised 43.7 percent of the total population. [5] The war brought significant changes, including migration out of the county by some African Americans. [5] Some freedmen moved to nearby counties and larger cities for more opportunities and to join with other freedmen in communities less subject to white supervision and intimidation. [5]

Following Reconstruction, there was violence as whites struggled to regain control of the state legislature. It reached a height in the late 19th and early 20th centuries. Tuscaloosa County had a total of 10 documented lynchings of African Americans, according to a 2015 study by the Equal Justice Initiative. [6]

Following passage by Alabama of the 1901 constitution that disenfranchised most African Americans and tens of thousands of poor whites, the state legislature passed laws to impose Jim Crow and racial segregation. Due to this oppression and problems of continued violence by lynchings, many African Americans left Alabama in two waves of the Great Migration in the first half of the 20th century. They went to Northern and Midwestern industrial cities. Their mass departure from Tuscaloosa County is reflected in the lower rates of county population growth from 1910 to 1930, and from 1950 to 1970. (see Census Table below.)

Blacks by 1960 represented 28.7% of the county population and they were still disenfranchised throughout the state. African Americans were active in demonstrations and other civil rights activities in the city of Tuscaloosa in the 1960s, seeking desegregation of public facilities, including the county courthouse. After passage of the federal Voting Rights Act of 1965, African Americans in the state regained their ability to exercise their constitutional right to vote and participate in the political system. Politics in the state have shifted since they recovered the vote. They have generally supported the Democratic Party, which on the national level had supported the civil rights movement.

While the county population has increased considerably since 1960, African Americans still comprise slightly less than one third of the total. In 2015, one of the four elected Tuscaloosa County Commissioners is African American.

Since the late 20th century, by contrast, white conservatives in Alabama and other southern states have essentially shifted to supporting Republican Party candidates, particularly for statewide and national offices.

On March 21, 1932, a F4 tornado hit the Tuscaloosa–Northport area in Tuscaloosa County. This storm was part of a massive tornado outbreak over March 21–22, 1932, spawning at least 36 tornadoes which killed more than 330 people and injuring 2,141. Alabama was hardest hit, with 268 fatalities.

On December 16, 2000, an F4 rated tornado hit communities south and east of Tuscaloosa, centering in the Bear Creek and Hillcrest Meadows areas. The tornado caused the deaths of 11 people while injuring over 125 others. It was the strongest tornado to hit Alabama in the month of December since 1950 and the strongest of a moderate tornado outbreak that took place across the Southeastern corner of the United States from Mississippi to North Carolina. Damage was estimated at over $12 million. More than 40 houses and 70 mobile homes were completely destroyed, with hundreds more seriously damaged.

On April 27, 2011, Tuscaloosa was hit by a half-mile (800 m) wide tornado, which was part of the 2011 Super Outbreak. It resulted in at least 44 deaths in the city, over 1000 injuries, and massive devastation. [7] [8] Officials at DCH Hospital (alone) in Tuscaloosa reported treating more than 1000 injured people in the first several days of the tornado aftermath. [9] Mayor Maddox was quoted saying that "We have neighborhoods that have been basically removed from the map." [10]

On April 29, President Barack Obama, upon touring the tornado damage in Tuscaloosa, said "I have never seen devastation like this". [11]

According to the U.S. Census Bureau, the county has a total area of 1,351 square miles (3,500 km2), of which 1,322 square miles (3,420 km2) is land and 30 square miles (78 km2) (2.2%) is water. [12] It is the second-largest county in Alabama by land area and third-largest by total area. It is located in the west central part of the state, in the region commonly known as West Alabama. The county straddles the boundary between the Appalachian Highlands and the Gulf Coastal Plain and consequently boasts a diverse geography.

As a historically conservative, white-majority region since the mid-20th century, Tuscaloosa County voted for John McCain over Barack Obama in the 2008 Election by a margin of 58-42%. But Obama attracted high turnout and many votes from young people and others, in addition to the African-American minority. The latter make up 28.9% of the population of the county and have supported Democrats in national elections since the civil rights era and restoration of their constitutional right to vote. [18]

Tuscaloosa County is one of seven in the state with limited home rule. It must still gain state legislative approval on many issues, including for financial measures. The four-member County Commission is elected from single-member districts. [20]

Judges are also elected. The current District Court Judges are:

The current Circuit Court Judges in no particular order are:

The current Clerk of the Circuit Court is Magaria H. Bobo.

On the federal level, Tuscaloosa County is divided between the fourth and seventh congressional districts of Alabama, represented by Robert Aderholt ( R) and Terri Sewell ( D), respectively. The 7th district includes much of the Black Belt and is a majority-minority district, with a predominantly African-American majority.

Tuscaloosa County is within the northern federal court district of Alabama.

The Tuscaloosa County School System serves students in the county who live outside the city limits of Tuscaloosa. The system has been in operation since 1871. The system is managed by a board of education, composed of 7 members elected by single-member districts by the voters of the county outside the limits of the city of Tuscaloosa. The board appoints a superintendent to manage the day-to-day operations of the system. In school year 2012-13, almost 18,000 students were enrolled by the system. There are 19 elementary schools, 8 middle schools, 6 high schools. Children are also served at the Tuscaloosa Regional Detention Center and Sprayberry Regional Educational Center; the latter provides services to gifted and special needs children. The six county high schools are Brookwood High School (Brookwood), Hillcrest High School (Taylorville), Holt (Holt), Northside (Samantha), Sipsey Valley (Coker), and Tuscaloosa County High School (Northport).

The Tuscaloosa City School System serves students who live in the city of Tuscaloosa. There are approximately 10,000 students enrolled in Tuscaloosa City Schools. Twenty-four schools comprise the district, including 13 elementary schools, 6 middle schools, 3 high schools and 3 campuses dedicated to specialty education: one for students with special needs and those receiving alternative education, a school for students studying performing arts, and a career technical facility for grades 9 – 12. The three high schools are Paul W. Bryant High School, Central High School, and Northridge High School.

Post secondary education is provided by the University of Alabama and Stillman College, a historically black college founded in 1876. Both are located in the city of Tuscaloosa and both are four-year schools. Shelton State Community College is one of the largest two-year community colleges in the state, and has two campuses in Tuscaloosa.

The TV Alabama Tower and the WTTO Tower near Windham Springs are guyed TV masts. These are the tallest constructions in Tuscaloosa County. 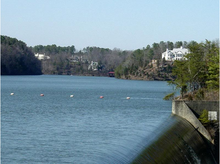