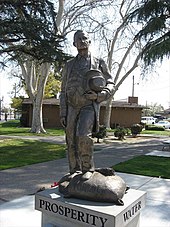 Founded on December 22, 1871, by prominent grain farmer John William Mitchell, the town consisted of a post office, a depot, a grain warehouse and a few other buildings. Mitchell declined the honor of having the town named for himself. The name "Turlock" was then chosen instead. The name is believed to originate from the Irish village Turlough. In October 1870, Harper's Weekly published an excerpt from English novelist James Payn's story Bred in the Bone, which includes the mention of a town named "Turlough" (translated from Gaelic as "Turlock"). [8] Local historians believe that the issue of Harper's Weekly was read by early resident H.W. Lander, who suggested the alternate name. [9]

Mitchell and his brother were successful businessmen, buying land and developing large herds of cattle and sheep that were sold to gold miners and others as they arrived. They were also leaders in wheat farming and cultivated tracts of land under the tenant system. Eventually, the Mitchells owned most of the area, over 100,000 acres, from Keyes to Atwater. In the early 20th century, 20-acre lots from the Mitchell estate were sold for $20 an acre. [10]

While it grew to be a relatively prosperous and busy hub of activity throughout the end of the 19th century, it was not incorporated as a city until February 15, 1908. [11] By that time intensive agricultural development surrounded most of the city (agriculture remains the major economic force in the region in current times). Many of the initial migrants to the region were Swedish. As an early San Francisco Chronicle article stated of the region and the community's lacteal productivity, "you have to hand it to the Scandinavians for knowing how to run a dairy farm." [12]

Turlock went on to become known as the "Heart of the Valley" because of its agricultural production. With the boom came racial and labor strife. In July 1921, a mob of 150 white men evicted 60 Japanese cantaloupe pickers from rooming houses and ranches near Turlock, taking them and their belongings on trucks out of town. [13] The white men claimed the Japanese were undercutting white workers by taking lower wages per crate of fruit picked. [14] In protest, fruit growers briefly threatened not to hire the white workers behind the eviction, preferring to let melons rot on vines to hiring such characters. [15] As a result of this stance, the eviction had the opposite effect of what the mob had intended. By August, Japanese workers had returned and, were nearly the only people employed to pick melons. [16]

The affair gained national attention, and California Governor William Stephens vowed that justice would be served. [17] Six men were quickly arrested but were apparently untroubled by the charges, stating that leaders of Turlock's American Legion and Chamber of Commerce had told them that no trouble would come of their actions. [18] Although a former Turlock night watchman testified that one of the accused had disclosed a plan "to clean up Turlock of the Japs," all of the arrested were acquitted. [19] [20]

The editorial line of the San Francisco Chronicle opposed both the evictions and Japanese labor, with one column stating that "we in California are determined that Oriental workers shall be kept out of the state. But that does not mean that the decent citizens of California will tolerate for one moment such proceedings as the attack of a mob on the Japanese cantaloupe workers in the Turlock district." [21]

In 1930, Turlock's population was 20% Assyrian. They were such a significant part of the population that the southern part of town even became referred to as Little Urmia, referring to the region of northwestern Iran from most had come. [22] In the 1930s, Turlock was cited by Ripley's Believe It or Not as having the most churches per capita in the US, which had partly to do with the variety of ethnic churches established for the relatively small settler population. Various religious centers reflecting a diverse population, such as Sikh Gurdwaras, various Assyrian Christian churches, and many mainline Protestant, Mormon and Roman Catholic churches have been built.

During World War II, after the attack on Pearl Harbor, the US government placed Japanese Americans into concentration camps all over the country. The Stanislaus County Fairgrounds was the site of one of 15 temporary "assembly centers" and held 3,669 Japanese Americans, most of whom were US citizens. [23] The US Army also built the Ballico Auxiliary Field (1942–1946) for training pilots in Turlock. [24]

In 1960, California State University, Stanislaus, opened to students, helping to spur growth in the city as the university expanded in its early years. In the 1970s, State Route 99 (formerly U.S. Route 99) was completed through the area, largely bypassing the then-incorporated areas of Turlock in a route to the west of the city through mostly undeveloped land. Since that time, the city has grown westward considerably to meet the [[freeway's north–south path, but urban development west of the freeway has only recently begun to take hold. In an attempt to allow for orderly growth of the city, comprehensive growth master plans have established urban growth boundaries since the 1960s.[ citation needed]

Turlock experienced extensive growth of both residential and commercial areas in the 1980s, following a statewide boom in housing demand and construction. The housing boom of the 1980s diminished in the early 1990s but increased again in the second half of the decade, partly as a result of San Francisco Bay Area growth, which placed a higher demand for more affordable housing in outlying areas. After the dot-com bust, housing demand intensified, producing higher house prices in an area formerly known for affordable housing. A recent boom in the retail sector has produced considerable growth along the Highway 99 corridor. The city reached its northern urban growth boundary, Taylor Road, in the late 1990s, and growth beyond it is restricted by the city's Master Plan.[ citation needed]

4.9% of Turlock's population reported ancestry in the category Assyrian. This was the fourth highest percentage in the United States for this category, the highest for a community outside of Oakland County, Michigan and the only one of the top seven places in this category that was not one of Detroit's northern suburbs. [30]

Culturally, the area is home to large concentrations of Americans of South Asian descent (particularly Sikhs), Mexican-Americans, and people of varied European descent. Swedes and Portuguese were early settlers to the area. Continued immigration from the Azores Islands ( Portugal) in recent decades has established a large Portuguese-speaking community within the city. Turlock is a major center for the Assyrian community in the United States, [31] who began to arrive in the 1910s seeking opportunities in farming. By 1924 the Assyrian Evangelical Church was established and by the 1950s, 8% of the population of Turlock was Assyrian. [32] There was an increased influx into Turlock in the 1970s following political strife in Iraq and in the 1980s following the 1979 Islamic Revolution in Iran.[ citation needed]

Foster Farms, Emanuel Medical Center, and Turlock Unified School District are the largest employers in Turlock. MedicAlert, a non-profit, charitable, and membership-based organization for 24/7 medical response information, has been based in Turlock since its founding in 1956. La Perla Tapatía Supermarkets is headquartered in Turlock.

Turlock uses a Council–Manager form of government. It is led by a five-member City Council consisting of a Mayor, a Vice-Mayor, and three Councilmembers. The Mayor is elected at-large, while each Councilmember is elected to one of four electoral districts. [34] All five Councilmembers are elected to four-year terms. The Turlock City Council holds public meetings every second and fourth Tuesday of each month at 6:00 p.m. [35] City Hall is located at 156 South Broadway in Turlock. A directly elected City Treasurer also serves a four-year term. [36]

In the United States House of Representatives, Turlock is in California's 10th congressional district, represented by Democrat Josh Harder. [38] 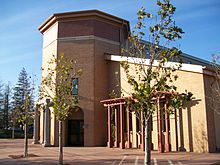 Turlock is home to two public high schools, Turlock High School and John H. Pitman High School, as well as a continuation high school, Roselawn High School, [40] both being part of the Turlock Unified School District. Turlock High School, the first in the city, opened in 1907, and Pitman opened in a major growth zone of northern Turlock in 2002. Pitman was awarded the California Distinguished School award in 2007, one of only two high schools in the county to receive the award for that year. Pitman is also known for being the home of former NFL star, Colin Kaepernick.

Turlock Christian High School is a private high school within the city. Classes are held at Monte Vista Chapel, a church in Turlock. Turlock has two junior high school, two middle schools and nine elementary schools, one of which got California Distinguished School Award in 2012 and won $10,000 in a competition held by Scotties. The money gained from the competition helped the Turlock Unified School District recently purchase Chromebooks for school use. [41]

Turlock is home to Julien, Crowell, Wakefield, Osborn, Cunningham, Earl, Walnut, Medeiros and Brown Elementary Schools inside its city limits. Of these, Walnut, Medeiros, and Earl are the schools that have received the highest satisfaction rates. [42]

The Turlock Journal, a local newspaper, has been in continuous operation since 1904.

Turlock Transit is the city's official bus service, while Stanislaus Regional Transit also has routes in Turlock. [43] An Altamont Corridor Express commuter rail station is planned to be constructed in Turlock for service starting in 2027. [44] Amtrak serves Turlock at the nearby Denair station.

Turlock and Turlock High School are briefly mentioned in the 1973 film American Graffiti. [45]

″Of course, by now I need to tell you that this song rose straight to the top of the charts in Turlock, California (Cheers). Numero Uno and it stayed there for a week or two. They love us in Turlock, and we love them for that." [46]