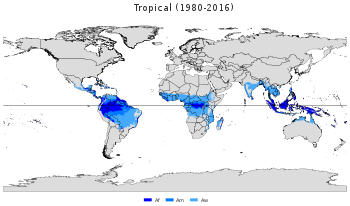 Within the tropical climate zone there are three distinct varieties based on precipitation:

Tropical rainforest climates (AF) normally occur close to the equator, typically within 10 or 15 degrees north and south latitude of the equator. This climate is dominated by the doldrums or Inter-tropical Convergence Zone, and area of sinking air, calm winds, and frequent rainfall. Seasonal rainfall is heavy, often more than 200 cm (80 inches) annually. In tropical rain forest climates, there is either no dry season or at most two dry months. All 12 months have average precipitation of at least 60 mm (2.4 in).

Some of the places with this climate are indeed uniformly and monotonously wet throughout the year (e.g., the Amazon Valley, or Indonesia, as well as areas in South and Central America, from Ecuador to Costa Rica; see, for instance, Andagoya, Colombia), but in many cases, the period of higher sun and longer days is distinctly wettest (as at Palembang, Indonesia) or the time of lower sun and shorter days may have more rain (as at Sitiawan, Malaysia).

(Note. The term aseasonal refers to the lack in the tropical zone of large differences in daylight hours and mean monthly (or daily) temperature throughout the year. Annual cyclic changes occur in the tropics, but not as predictable as those in the temperate zone, albeit unrelated to temperature, but to water availability whether as rain, mist, soil, or groundwater. Plant response (e. g., phenology), animal (feeding, migration, reproduction, etc.), and human activities (plant sowing, harvesting, hunting, fishing, etc.) are tuned to this 'seasonality'. Indeed, in tropical South America and Central America, the 'rainy season' (and the 'high water season') is called Invierno or inverno, though it could occur in the Northern Hemisphere summer; likewise, the 'dry season' (and 'low water season') is called Verano or verão, and can occur in the Northern Hemisphere winter).

This type of climate results from the monsoon winds which change direction according to the seasons. In this type of tropical climate, there is a short but distinct dry season. Thus, this zone falls under the influence of the Intertropical Convergence Zone at the time of high sun (summer) and under the influence of the drier Trade Winds at the time of low sun (winter). This climate has a driest month (which nearly always occurs at or soon after the "winter" solstice for that side of the equator) with rainfall less than 60 mm, but at least

Aw climates have a pronounced dry season, with the driest month having precipitation less than 60 mm and less than

. [1] [2] In the Aw tropical climate the dry season is often several months and can be severe, with most plant and animal life adapting to drought conditions for several months. Aw climates often (but not always as in Africa) occur in higher tropical latitudes, between 15 and 20 north and south. Climates often feature tree-studded grasslands, rather than thick jungle. It is this widespread occurrence of tall, coarse grass (called savanna) which has led to Aw climates often being referred to as tropical savanna. However, there is some doubt whether tropical grasslands are climatically induced. Additionally, pure savannas, without trees, are the exception rather than the rule. It is one of the two varieties of the tropical savanna climates, along with As, with the main difference being that the wet-season in Aw climates usually run in the high-sun months of the year, which runs from April to September in the northern hemisphere, and from October to March in the southern hemisphere.

This type of tropical climate occurs in northern Australia, across the Sudan and eastern Africa, and parts south-central Brazil and adjacent parts of Bolivia and Paraguay and western Madagascar in the southern hemisphere. In the northern hemisphere tropical savanna climate occurs north of the Amazon in Venezuela and Colombia, as well as parts of western Central America, western Cuba, and the extreme southern part of Florida in the United States. [4]:208–11

Because of the effect of sun angle on climate most areas within the tropics are hot year-round, with diurnal variations in temperature exceeding seasonal variations. Seasonal variations in tropical climate are dominated by changes in precipitation, which are in turn largely influenced by the tropical rain belt or Intertropical Convergence Zone (ITCZ), a portion of the Hadley cell. The ITCZ is shown, for July average, in the graphic. Areas of ascending air have heavy rainfall; areas of descending air are dry. The ITCZ somewhat follows the solar equator throughout the year, but with geographical variations, and in some areas (India) is heavily influenced by local large-scale monsoons.