Located on the border with Michigan, the metropolitan area includes the counties of Fulton, Lucas, and Wood. The Toledo metro area has strong ties to Metro Detroit, located 40 miles (64 km) north. Toledo is also part of the Great Lakes Megalopolis.

See also: List of colleges and universities in Ohio 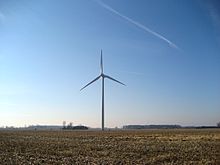 This Wind Turbine in Bowling Green is one of the many wind turbines in rural Northwest Ohio areas.

According to a 2015 article, there were three Toledo companies that made the Fortune 500 list. #399 is Owens-Illinois (O-I), which specializes in glass and glass packaging. #410 was Dana Corporation which is a global leader in the supply of thermal-management technologies among many other specialties. Lastly, at #498, Owens Corning is the world leading provider of glass fiber technology. [1] Just outside of the Toledo metropolitan in neighboring Findlay, Ohio, #25 Marathon Petroleum Corporation is headquartered.

The economy of Toledo has been heavily influenced by both the economy of nearby Detroit and agriculture. Recently, health care and technology firms have tried to make their way into the metropolitan, though growth in those sectors has been slow. Instead, Toledo and its suburbs are still home to several manufacturing and construction businesses and factories. The Bureau of Labor Statistics reported, in 2015, that manufacturing employment in Toledo had grown by 4.1% between December 2013 and December 2014 (this was double the rate than the United States average). More so, construction job growth grew by nearly 10% in the same time period. In 2014, manufacturing added 1,700 jobs to the Toledo area, but it also saw losses in the business services. In 2014, the US Census Estimated there were roughly 285,000 people employed in the Toledo metropolitan area. [2] In August 2015, it was reported that Toledo's unemployment rate reached a 10-year low, and in June 2015 just 5% of the regional population was unemployed, whereas the United States average unemployment was at 5.3% during the same period. [3]

The Toledo–Port Clinton combined statistical area includes the Port Clinton micropolitan area. The population of the CSA in 2010 was 651,429.Since the 2000 Census, the Toledo-Fremont CSA has seen a decline in population of 14,468.

All communities and townships