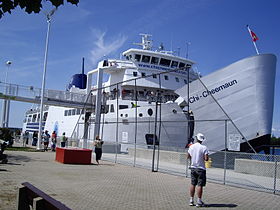 Tobermory is a small community located at the northern tip of the Bruce Peninsula in the municipality of Northern Bruce Peninsula. It is 300 kilometres (190 miles) northwest of Toronto. The closest city to Tobermory is Owen Sound, 100 kilometres (62 miles) south of Tobermory and connected by Highway 6. Due to similar harbour conditions it was named after Tobermory ( /ˌtoʊbərˈmɔːri/; Scottish Gaelic: Tobar Mhoire), the largest settlement in the Isle of Mull in the Scottish Inner Hebrides.

The community is known as the "fresh water SCUBA diving capital of the world" [1] because of the numerous shipwrecks that lie in the surrounding waters, especially in Fathom Five National Marine Park. Tobermory and the surrounding area are popular vacation destinations. People come for the beaches, the diving, the unspoilt countryside and the relaxed pace of life. The town lies north of the Bruce Peninsula National Park.

Tobermory is typically a few degrees colder than Toronto. Most of the businesses in the town are open from May until the Thanksgiving long weekend in October, and are closed for the other seven months of the year.

The Government of Ontario has erected a plaque in Tobermory about the geography of the area. [3] The first, at the tip of the peninsula, titled ESCARPMENT SUBMERGENCE, provides this information: "This shoreline marks the northern extremity of the Niagara Escarpment in southern Ontario. Stretching unbroken for 465 miles across southern Ontario from Niagara Falls. The escarpment was created by erosion of layered sedimentary rocks deposited in ancient seas of the Paleozoic Era over 400 million years ago. Portions of the escarpment form the islands between Tobermory and South Baymouth and the same Paleozolic rocks shape the geology of Manitoulin Island."

In the heart of a World Biosphere Reserve, the Peninsula is a place of global ecological significance. The massive, rugged cliffs of the park are inhabited by thousand-year-old cedar trees, overhanging the crystal-clear waters of Georgian Bay. The park comprises an incredible array of habitats, from rare alvars to dense forests and clean lakes. It was established in 1987 as an expansion of Cabot Head Provincial Nature Reserve and occupies 156 square miles (400 km2) of land on both sides of the peninsular, over 75% of which is now in public ownership. [5]

The deep waters at the mouth of Georgian Bay are home to Fathom Five, Canada's first National Marine Conservation Area. The park preserves a rich cultural legacy that includes 22 shipwrecks and several historic lighthouses. Fathom Five's freshwater ecosystem contains some of the most pristine waters of the Great Lakes. The rugged islands of the park are a reminder of the impressive lake-bed topography found beneath the waves. There are glass-bottom cruises at Tobermory which offer tours to the park, as well as the rugged north coast of the Bruce Peninsula.

Tobermory is home to many different species of plants and animals. Some of the more commonly sighted animals include black bears, raccoons, white-tailed deer, porcupines, chipmunks and a variety of snakes. The Eastern Massasauga rattlesnake can also be found in Tobermory although it is now an endangered species.

Among the many types of plants found in the area, there are around 43 species of wild orchids on the Bruce Peninsula due to its variety of habitats. To celebrate, Tobermory hosts an annual orchid festival in June which includes guided tours and presentations.

At least one species of flower is found growing in Big Tub and no place else in the world.

The community is referenced in a song by Stan Rogers called "The Last Watch On The Midland" which appears on the From Fresh Water album.

The science fiction novel Commitment Hour by James Alan Gardner is set in Tober Cove, a post-apocalyptic version of Tobermory.

Rosie is introduced as Gail's "cousin from Tobermory" in season 2, episode 6 of Letterkenny.

James Reaney's poem "Near Tobermory, Ontario" describes a cove near the town.