Thornhill is a historic plantation near Forkland, Alabama. The Greek Revival main house was built in 1833 by James Innes Thornton. [2] The house was placed on the National Register of Historic Places on May 10, 1984. [1]

James Innes Thornton was born October 28, 1800, at the Thornton family plantation known as Fall Hill, in Fredericksburg, Virginia. He was educated at Washington and Lee University and then emigrated to Huntsville, Alabama. He began to practice law there in 1820. He was elected as Alabama's third secretary of state in 1824 and remained in that position until 1834. After this he retired from public life and became a planter in Greene County. Thornton married Mary Amelia Glover in 1825, daughter of Allen and Sarah Norwood Glover of Demopolis. [2] They had two children. Her brother, Williamson Allen Glover, developed the neighboring plantation known as Rosemount. Mary died after only a few years. In 1831, Thornton remarried to Anne Amelia Smith of Dumfries, Virginia. Anne died in 1864. He then remarried in 1870 for a third and final time to Mrs. Sarah Williams Gould Gowdy, daughter of William Proctor and Eliza Chotard Gould of the Hill of Howth in Boligee. Thornton died at Thornhill on September 13, 1877. [2]

Thornhill Plantation was developed as a cotton plantation in the early 1830s and extended over 2,600 acres (11 km2). It utilized the labor of 156 slaves by 1860. About a third of the slaves lived in quarters behind the plantation house. [3] According to the diary of Josiah Gorgas, in talking with Thornton at Thornhill on Tuesday, June 6, 1865, less than two months after the end of the Civil War, Thornton "oppos(ed) ... the doctrine of secession and necessary deduction that we fought so valiantly (in the War) and bled so freely in a cause radically wrong." Gorgas pointed out however, "He has, I learn however, done his share to sustain the war, & perhaps that consciousness makes him talk the more freely of his former views" [4] 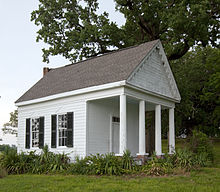 The plantation schoolhouse at Thornhill, built circa 1845.

William Nichols is believed to be the architect of the main house at Thornhill. Nichols became the state architect of Alabama in 1827. He is known for designing the now-destroyed Alabama State Capitol building at Tuscaloosa and the former Mississippi State Capitol building in Jackson, Mississippi. The house at Thornhill was completed by 1833. The monumental two-story portico with six Ionic columns was added circa 1850. David Rinehart Anthony, of Eutaw, is believed to be the builder who made the portico addition and second story balcony (crisscrossed lattice railing). The house measures 55 feet (17 m) wide. Inside is a 14 ft (4.3 m) wide by 40 ft (12 m) long central hall with a spiral staircase at the back. There are two rooms to either side. The left front room was the parlor, with the dining room behind it. On the front right was the master bedroom with the plantation office behind it. Upstairs is a matching hall and four bedrooms. All eight rooms are 19.5 feet (5.9 m) square. The downstairs rooms have 12-foot (3.7 m) ceilings. The upstairs ceilings are 11 feet (3.4 m).

Originally there was a brick kitchen behind the house, it later burned. Additions were made to the original structure from circa 1890 to 1949. They were razed in 1994 and rebuilt to better match the original intent of the house. The house and grounds were extensively recorded by the Historic American Buildings Survey in 1934. [5] The plantation schoolhouse was constructed circa 1845. The Thornton children, as well as neighboring plantation children, were taught there. Surrounding the schoolhouse are 230-year-old post oaks.

The main staircase at the rear of the downstairs central hall.

Gate to the family cemetery in September 2011, following damage from a tornado on the grounds.

Buried in the family cemetery, located a few hundred feet east of the main house, are: [6]