The park's larger South Unit lies alongside Interstate 94 near Medora, North Dakota. The smaller North Unit is situated about 80 mi (130 km) north of the South Unit, on U.S. Route 85, just south of Watford City, North Dakota. Roosevelt's Elkhorn Ranch is located between the North and South units, approximately 20 mi (32 km) west of US 85 and Fairfield, North Dakota. The Little Missouri River flows through all three units of the park. The Maah Daah Hey Trail connects all three units.

The park received 749,389 recreational visitors in 2018. [2] It is the only American national park named directly after a single person.

Rainbow over the badlands

Roosevelt first came to the North Dakota badlands to hunt bison in September 1883. During that first short trip, he got his bison and fell in love with the rugged lifestyle and the "perfect freedom" of the West. He invested $14,000 in the Maltese Cross Ranch, which was already being managed by Sylvane Ferris and Bill Merrifield seven miles south of Medora. That winter, Ferris and Merrifield built the Maltese Cross Cabin. After the death of both his wife and his mother on February 14, 1884, Teddy Roosevelt returned to his North Dakota ranch seeking solitude and time to heal. That summer, he started his second ranch, the Elkhorn Ranch, 35 miles north of Medora, which he hired two Maine woodsmen, Bill Sewall and Wilmot Dow, to operate. Teddy Roosevelt took great interest in his ranches and in hunting in the West, detailing his experiences in pieces published in eastern newspapers and magazines. He wrote three major works on his life in the West: Ranch Life and the Hunting Trail, Hunting Trips of a Ranchman and The Wilderness Hunter. His adventures in "the strenuous life" outdoors and the loss of his cattle in the starvation winter in 1886–1887 were influential in Theodore Roosevelt's pursuit of conservation policies as President of the United States (1901–1909). 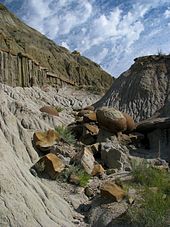 Cannonball concretions [3] in the North Unit

One of the most popular attractions is wildlife viewing. The park is home to a wide variety of Great Plains wildlife including bison, coyotes, cougars, feral horses, badgers, elk, bighorn sheep, white-tailed deer and mule deer, prairie dogs, and at least 186 species of birds including golden eagles, sharp-tailed grouse, and wild turkeys. Bison may be dangerous and visitors are advised to view them from a distance. Bison, elk, and bighorn sheep have been successfully reintroduced to the park.

The scenery changes constantly in relationship with the seasons. The brown, dormant grass dominates from late summer through the winter, but explodes into green color in the early summer along with hundreds of species of flowering plants. Winter can be a beautiful scene as snow covers the sharp terrain of the badlands and locks the park into what Theodore Roosevelt called "an abode of iron desolation." [4] 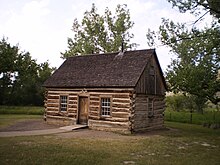 Roosevelt's Elkhorn Ranch is a separate, remote area of the park, 35 miles north of Medora, accessible by gravel roads. Check with park rangers for road conditions and routes to travel to the site. The foundation of the ranch house and other shops buildings have been preserved, though the other portions of the cabin were removed and re-purposed after Roosevelt vacated the ranch. Threats to the Elkhorn Ranch site include oil development on adjacent lands, particularly visual intrusions and noise pollution from oil facilities and traffic.

The park is popular for back country hiking and horseback riding. Permits for back country camping may be obtained at the South Unit or North Unit Visitor Centers. Over 100 miles of trail make it a fine hiking park, though water and shade are limited along trails. The park units are mostly surrounded by Forest Service grasslands. The area has very dark night skies with excellent star gazing and occasional northern lights.

The entire park has been surrounded with a 7-foot (2.1 m) tall woven wire fence to keep bison and feral horses inside the park and commercial livestock out. Other animals are able to pass over, under, or through the fence in specific locations provided for that purpose.

The town of Medora, at the entrance to the south unit, provides a touristy western experience, with wooden planked sidewalks, old fashioned ice cream parlors, and buggy rides. There are several museums and the Burning Hills Amphitheather with nightly productions of the Medora Musical from early June to early September.

Park officials manage populations of bison, horses, and elk to maintain a balanced ecosystem. Biologists also monitor prairie dog towns, though the park only controls their population in instances where they pose a threat to buildings or human health.