The Palace was one of eight basketball arenas owned by their respective NBA franchises.

By the time it closed as an NBA venue, the Palace was one of only two arenas which had not sold its naming rights to a corporate sponsor. The other was Madison Square Garden. [14]

The court was previously named the "William Davidson Court", in honor of late owner Bill Davidson, prior to the Pistons' home opener on October 30, 2009; however, Davidson's signature, along with the retired numbers, were removed from the hardwood when Tom Gores took over ownership of the Palace, and were instead re-retired atop the Palace rafters as replacement banners. [15] [16] [17] 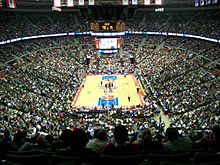 The interior of the Palace of Auburn Hills during a Detroit Pistons basketball game in January 2006.

From 1957 to 1978, the Pistons competed in Detroit's Olympia Stadium, Memorial Building, and Cobo Arena. In 1978, owner Bill Davidson elected not to share the new Joe Louis Arena with the Detroit Red Wings, and instead chose to relocate the team to the Pontiac Silverdome, a venue constructed for football, where they remained for the next decade. [8] [18] While the Silverdome could accommodate massive crowds, it offered substandard sight lines for basketball viewing. In late 1985, a group led by Davidson decided to build a new arena in Auburn Hills. Groundbreaking for the arena took place in June 1986. [12] Using entirely private funding, The Palace cost a relatively low price of $90 million. [2] [8] The Davidson family held a controlling interest in the arena until Tom Gores bought it as part of his purchase of the Pistons in 2011. [2]

Then-Pistons owner Bill Davidson and two developers privately financed the $90 million construction of The Palace, and did not require public funds. [2]

The Palace was built with 180 luxury suites, considered an exorbitant number when it opened. However, it consistently managed to lease virtually all of them. In December 2005, the Palace added five underground luxury suites, each containing 450 square feet (42 m2) of space and renting for $450,000 per year. Eight more luxury suites, also located below arena level, were opened in February 2006. They range in size from 800 to 1,200 square feet (74 to 111 m2) and rent for $350,000 annually. [19] The architectural design of the Palace, including its multiple tiers of luxury suites, has been used as the basis for many other arenas in North America since its construction. [20]

The Palace opened in 1988. [12] When one of its basketball occupants won a championship, the number on its address changed. Its current address is 6 Championship Drive, reflecting the Pistons' three NBA titles and the Shock's three WNBA titles (the Vipers' 1997 Turner Cup championship has not been officially recognized in the arena's address; the address also remained unchanged despite the Shock's move to Tulsa, Oklahoma in 2010). [21] [22] [23]

The Palace was widely considered to be the first of the modern-style NBA arenas, and its large number of luxury suites was a major reason for the building boom of new NBA arenas in the 1990s. Although the Palace became one of the oldest arenas in the NBA, its foresighted design contained the amenities that most NBA teams have sought in new arenas built since that time. By contrast, of the other NBA venues that opened during the 1988-89 season, Charlotte Coliseum, Miami Arena, and the Bradley Center have been demolished, while Sleep Train Arena has been replaced. All of these arenas were rendered obsolete by the lack of luxury suites and club seating, lucrative revenue-generating features that made pro sports teams financially successful in order to remain competitive long-term, and also being located in suburban rather than downtown areas (the Palace, however, remained one of the successful suburban arenas). [2] [20] [24] [25]

Nonetheless, Palace Sports & Entertainment (PS&E) had spent $117.5 million in upgrades and renovations to keep the arena updated. [2] A new high definition JumboTron monitor, new LED video monitors, and more than 950 feet (290 m) of ribbon display technology from Daktronics was installed in the mid-2000s. [26]

Malice at the Palace

On November 19, 2004, a fight broke out between members of the Pistons and Indiana Pacers. As the on-court fight died down, a fan threw a cup of Diet Coke at Pacers forward Ron Artest, who then rushed into the crowd, sparking a melee between players and spectators. The fight resulted in the suspension of nine players, criminal charges against five players, and criminal charges against five spectators. The offending fans were banned from attending games at the Palace. In the aftermath of the fight, the NBA decided to increase the security presence between players and spectators. The fact that the fight took place at the Palace led to it becoming colloquially referred to as the "Malice at the Palace" and the "Basketbrawl". [27] [28]

Sting performed during his ...Nothing Like the Sun Tour on August 13, 1988, becoming the very first musical act to perform at The Palace. [30]

U2 performed at The Palace on March 27, 1992 on the first leg of their Zoo TV Tour. During the performance, Bono called a local pizza bar from the stage and ordered 10,000 pizzas for the crowd in attendance. Approximately 100 pizzas were delivered. [45]

The Cure performed two consecutive shows, during their Wish Tour on July 18–19, 1992, with The Cranes as their opening act. The shows were recorded and released as a live album, entitled Show. [46]

The Palace was the site of an attempt on the life of Led Zeppelin guitarist Jimmy Page, while he was on tour, with former bandmate Robert Plant, during their No Quarter Tour. On March 31, 1995, Lance Alworth Cunningham, a 23-year-old who thought that Led Zeppelin's music contained "satanic messages", tried to rush the stage with a knife. He was subdued about 50 feet from the stage. [51] [52]

Grand Funk Railroad performed a benefit show for the nation of Bosnia and Herzegovina in March 1997 during their Reunion Tour. The show also featured Peter Frampton, Alto Reed, Paul Shaffer, and the Detroit Symphony Orchestra. The performance was recorded, and released as the double-live Bosnia album in October of that year. [46]

Bob Seger held the final concert at the venue on September 23, 2017. [64] [65] The last scheduled event at the venue was the Taste of Auburn Hills on October 12, 2017. [13] Palace Sports & Entertainment entered into a joint venture with Olympia known as 313 Presents to jointly manage entertainment bookings and promotions for Little Caesars Arena and other venues owned by the firms. [66]

Despite its closure, the Palace was still in top condition as a sporting and concert venue. [64] However, it is located in a northern suburb, relatively far away from the city center, in light of the growing trend of "walkable urbanism" where the Pistons wanted to grow their fanbase. [67] It was speculated that the Palace would likely end up being demolished, and the site would be redeveloped to accommodate a possible new auto supplier headquarters and research and development parks. [68]

In October 2018, it was reported that Oakland University had considered purchasing the arena. [69] Ultimately, a deal never went through. [70]

In April 2019, it was reported that Tom Gores' Platinum Equity were in negotiations to sell the arena to Livonia-based real estate firm Schostak Brothers. [70] [71] On June 24, 2019, it was reported that the arena had been sold to a joint venture which planned to redevelop the property into a mixed-use office park. [72] Demolition is scheduled to take place in January 2020. [73]

THE PALACE OF AUBURN HILLS