Table of Contents ⇨
This article is about the museum. For the person, see Henry Ford. For other uses, see Henry Ford (disambiguation).
United States historic place

The Henry Ford (also known as the Henry Ford Museum of American Innovation and Greenfield Village, and as the Edison Institute) is a large indoor and outdoor history museum complex and a National Historic Landmark in the Detroit suburb of Dearborn, Michigan, United States. [3] [4] The museum collection contains the presidential limousine of John F. Kennedy, Abraham Lincoln's chair from Ford's Theatre, Thomas Edison's laboratory, the Wright Brothers' bicycle shop, the Rosa Parks bus, and many other historical exhibits. It is the largest indoor-outdoor museum complex in the United States [5] and is visited by over 1.7 million people each year. [6] It was listed on the National Register of Historic Places in 1969 as Greenfield Village and Henry Ford Museum [1] and designated a National Historic Landmark in 1981 as "Edison Institute". [2]

Named for its founder, the automobile industrialist Henry Ford, and based on his efforts to preserve items of historical interest and portray the Industrial Revolution, the property houses homes, machinery, exhibits, and Americana of historically significant items as well as common memorabilia, both of which help to capture the history of life in early America. It is one of the largest such collections in the nation. [7]

Henry Ford said of his museum:

I am collecting the history of our people as written into things their hands made and used.... When we are through, we shall have reproduced American life as lived, and that, I think, is the best way of preserving at least a part of our history and tradition... [8]

The Edison Institute was dedicated by President Herbert Hoover to Ford's longtime friend Thomas Edison on October 21, 1929 – the 50th anniversary of the first successful incandescent light bulb. The attendees included Marie Curie, George Eastman, John D. Rockefeller, Will Rogers, Orville Wright, and about 250 others. [11] The dedication was broadcast on radio with listeners encouraged to turn off their electric lights until the switch was flipped at the Museum. [12]

In 1970, the museum purchased what it believed to be a 17th-century Brewster Chair, created for one of the Pilgrim settlers in the Plymouth Colony, for $9,000. In September 1977, the chair was determined to be a modern forgery created in 1969 by Rhode Island sculptor Armand LaMontagne. [14] The museum retains the piece as an educational tool on forgeries. [15]

In the early 2000s, the museum added an auditorium to the building's south corner. This housed an IMAX theater until January 2016 when museum management decided to change formats for the facility to better fit with its mission. The renovated theater reopened in April of that year. [16] 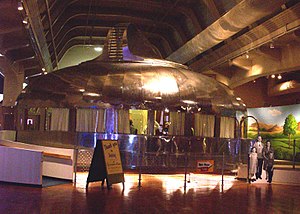 The Henry Ford Museum of American Innovation began as Henry Ford's personal collection of historic objects, which he began collecting as far back as 1906. Today, the 12 acre (49,000 m²) site is primarily a collection of antique machinery, pop culture items, automobiles, locomotives, aircraft, and other items:

Behind the scenes, the Benson Ford Research Center uses the resources of The Henry Ford, especially the photographic, manuscript and archival material which is rarely displayed, to allow visitors to gain a deeper understanding of American people, places, events, and things. The Research Center also contains the Ford Motor Archives. [28]

To commemorate the 100th anniversary of the sinking of the RMS Titanic, the Henry Ford Museum exhibited a vast array of artifacts and media documenting the Titanic's voyage and demise. The exhibit was hosted from 31 March to 30 September 2012. 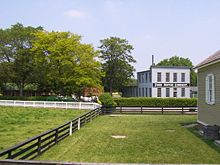 A glimpse of Greenfield Village

Greenfield Village, the outdoor living history museum section of the Henry Ford complex, was (along with the adjacent Henry Ford Museum) dedicated in 1929 and opened to the public in June 1933. [29] It was the first outdoor museum of its type in the nation, and served as a model for subsequent outdoor museums. [7] Patrons enter at the gate, passing by the Josephine Ford Memorial Fountain and Benson Ford Research Center. Nearly one hundred historical buildings were moved to the property from their original locations and arranged in a "village" setting. The museum's intent is to show how Americans have lived and worked since the founding of the country. The Village includes buildings from the 17th century to the present, many of which are staffed by costumed interpreters who conduct period tasks like farming, sewing and cooking. A collection of craft buildings such as pottery, glass-blowing, and tin shops provide demonstrations while producing materials used in the Village and for sale. The Village features costumed and plain-clothed presenters to tell stories and convey information about the attractions. Some of these presenters are seasonal, such as the "games on the green" presenters who only operate in the summer. Greenfield Village has 240 acres (970,000 m²) of land of which only 90 acres (360,000 m²) are used for the attraction, the rest being forest, river and extra pasture for the sheep and horses.

Village homes, buildings, and attractions include:

There are various modes of historic transportation in the Village providing rides for visitors, which utilize authentic Ford Model Ts, a 1931 Ford Model AA bus (one of about 15 known to exist), horse-drawn omnibuses, and trains pulled by steam locomotives. 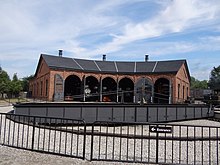 The rail line on which the steam locomotives in Greenfield Village presently run originally consisted of a simple straight stretch of track along the northern edge of the museum property, and has been present ever since Greenfield Village was dedicated in 1929. The rail line, now named the Weiser Railroad, was later expanded into a continuous loop around the perimeter of the museum property, which was completed in stages between 1971 and 1972. [45] This 4 ft 8 1⁄2 in (1,435 mm) standard gauge passenger line is 2 miles (3.2 km) long and has four stations. All of the railroad's stations consist solely of single side platforms except for the station in the Railroad Junction section, which also includes the relocated Smiths Creek Depot building originally built for the Grand Trunk Railway in 1858. [46]

The line utilizes a modern replica of a Detroit, Toledo & Milwaukee Railroad (DT&M) roundhouse built in 1884. [47] At the time it was opened to the public in 2000, the new DT&M Roundhouse replica was one of only seven working roundhouses open to the public in the United States. [48]

The railroad, unusual for a heritage railroad built purposely for tourism, has a direct connection to the United States National Railroad Network. The line to which it connects is a section of the Michigan Line owned by MDOT [49] and is used by Amtrak's Wolverine service, which runs between Chicago, Illinois and Pontiac, Michigan. In the past, Amtrak's Greenfield Village station provided direct access to Greenfield Village near the Weiser Railroad's Smiths Creek Depot for reserved tour groups of twenty or more. It was consolidated in December 2014 with the new John D. Dingell Transit Center. The new transit center is adjacent to the Henry Ford museum complex and has a gate allowing access to the complex via a short walk. [50]

The Torch Lake steam locomotive on the Weiser Railroad

Each year the Village honors the sacrifices and achievements of those who bravely fought in the American Civil War. The Civil War Remembrance event takes place Memorial Day weekend (Sat-Mon) every year. An estimated 750,000 people died during the Civil War. The Civil War Remembrance is a weekend event, which includes hundreds of Union and Confederate reenactors, musicians and historic presenters. This event features more than 400 Civil War reenactors who spend the entire weekend in the Village. Greenfield Village provides many opportunities in order to learn about the Civil War: exhibits, presentations, battle reenactments, concerts, short plays, hands-on activities and Q&A with historians. [54]

Motor Muster is one of two car shows that take place annually in Greenfield Village. Motor Muster is traditionally held on Father's Day weekend. This event currently features cars built from 1932–1976, and features between 600–800 cars. Special attractions include car judging, and Pass in Review in which experts discuss highlights of the passing cars.

Every summer the Henry Ford has a Summer Camp. It takes place inside Greenfield Village and the Henry Ford Museum between June and August. It is for children in grades 2-9. [55] Each grade level has a different theme and children who participate in the Summer Camp have the opportunity to look at both the Henry Ford Museum of American Innovation and Greenfield Village from different perspectives. Children participate in activities such as: apprenticeships, canoeing, glass blowing and other age-dependent activities. 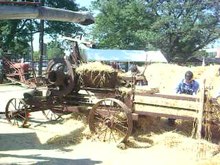 World Tournament of Historic Base Ball

The World Tournament of Historical Base Ball takes place every year in August. Guests get to take a step back in time to 1867 as vintage base ball clubs from around the country compete by the game's early rules in a two-day exposition of historic base ball. [56] The clubs engage in two days of throwing, batting and competition. The event is included in Greenfield Village admission. [57]

For four nights around Independence Day, the Detroit Symphony Orchestra performs a patriotic concert on Walnut Grove in the Village. Attendance ranges from 5000–9500 per evening.

This weekend event in July was first presented in 2007 and ran annually through 2015. Ragtime Street Fair featured dozens of live performers, including the River Raisin Ragtime Revue, "Perfessor" Bill Edwards, Mike Montgomery, Nan Bostick, Taslimah Bey, John Remmers, and Tartarsauce Traditional Jazz Band, who celebrated the Ragtime era (ca. 1900-1917). The event also featured silent movies, phonograph demonstrations, a cake walk, a cutting contest, and a musical revue in Town Hall as well as the 1912 presidential campaign of Theodore Roosevelt. Instruction in the ragtime one-step was provided free of charge at this event.

The Old Car Festival takes place every year in September. The Old Car Festival has been held on the first weekend after Labor Day since 1955. The festival takes over the streets and grounds of Greenfield Village with the sights, sounds, and smells of hundreds of authentic vehicles from the 1890s through 1932. [58] This event features 500-700 cars. Special events include car judging, Pass in Review, the gaslight tour, and car races on the Walnut Grove field. Guests can take a self-guided tour of the exposition and talk to the owners of the treasured vehicles. Visitors can watch a Model T be assembled in just minutes, attend presentations, and hear experts share information about the vintage vehicles. [55]

The Village's Halloween celebration features decorations, a headless horseman, witches, other costumed characters, treats and activities for visitors. It is held Thursday, Friday, Saturday and Sunday evenings in October. [59]

The Christmas season has traditionally been very popular in Greenfield Village. Many buildings feature period decorations and the Village is open for a self-guided stroll. Even an ice skating rink is available; bring your own skates or borrow them from the staff. Visitors can view live entertainment and costumed presenters or ride in a horse-drawn carriage or Model T. [60]

The Ford Rouge Factory Tour is a first-hand journey behind the scenes of a modern, working automobile factory. Boarding buses at the Henry Ford Museum, visitors are taken to the River Rouge Plant and Dearborn Truck Plant, an industrial complex where Ford has built cars since the Model A that once employed 100,000 people. [61]

In 2003, the Ford Rouge Factory, the manufacturing facility for the Ford F-Series truck, reopened following extensive renovations. When it reopened in 2003, as sustainable architecture (Gold LEED Building) led by noted 'green' architect William McDonough, it also opened a new state-of-the-art visitor center highlighting the factory's sustainable aspects and educating visitors on the legacy of the historic manufacturing facility as well as the vehicle manufacturing process that takes place within the manufacturing plant. The visitor experiences, designed by award-winning experience designer Bob Rogers and the design team BRC Imagination Arts, [62] offers two multi-screen theaters, numerous touchscreen interpretive displays and overlook the world's largest "Green" roof, atop the factory. Visitors then walk through the working assembly plant. [63]