From Wikipedia
https://en.wikipedia.org/wiki/Tesseract
Four-dimensional analogue of the cube
This article is about the geometric shape. For the cube used in the Marvel Cinematic Universe also known as Tesseract, see Cosmic Cube. For other uses, see Tesseract (disambiguation). 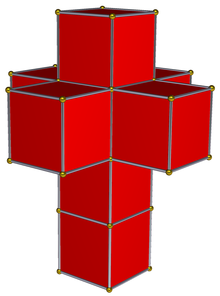 The Dali cross, a net of a tesseract

The tesseract is also called an eight-cell, C8, (regular) octachoron, octahedroid, [2] cubic prism, and tetracube. [3] It is the four-dimensional hypercube, or 4-cube as a part of the dimensional family of hypercubes or measure polytopes. [4] Coxeter labels it the

polytope. [5] The term "hypercube" without a dimension reference is frequently treated as a synonym for this specific shape.

According to the Oxford English Dictionary, the word tesseract was coined and first used in 1888 by Charles Howard Hinton in his book A New Era of Thought, from the Greek τέσσερεις ἀκτίνες (téssereis aktínes, "four rays"), referring to the four lines from each vertex to other vertices. [6] In this publication, as well as some of Hinton's later work, the word was occasionally spelled "tessaract".

A tesseract is bounded by eight hyperplanes (xi = ±1). Each pair of non-parallel hyperplanes intersects to form 24 square faces in a tesseract. Three cubes and three squares intersect at each edge. There are four cubes, six squares, and four edges meeting at every vertex. All in all, it consists of 8 cubes, 24 squares, 32 edges, and 16 vertices.

An animation of the shifting in dimensions

The construction of hypercubes can be imagined the following way:

A diagram showing how to create a tesseract from a point

Projections on the 2D-plane become more instructive by rearranging the positions of the projected vertices. In this fashion, one can obtain pictures that no longer reflect the spatial relationships within the tesseract, but which illustrate the connection structure of the vertices, such as in the following examples:

A tesseract is in principle obtained by combining two cubes. The scheme is similar to the construction of a cube from two squares: juxtapose two copies of the lower-dimensional cube and connect the corresponding vertices. Each edge of a tesseract is of the same length. This view is of interest when using tesseracts as the basis for a network topology to link multiple processors in parallel computing: the distance between two nodes is at most 4 and there are many different paths to allow weight balancing. 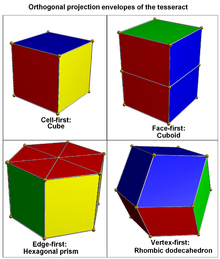 Parallel projection envelopes of the tesseract (each cell is drawn with different color faces, inverted cells are undrawn) 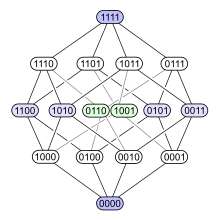 The rhombic dodecahedron forms the convex hull of the tesseract's vertex-first parallel-projection. The number of vertices in the layers of this projection is 1 4 6 4 1—the fourth row in Pascal's triangle.

This configuration matrix represents the tesseract. The rows and columns correspond to vertices, edges, faces, and cells. The diagonal numbers say how many of each element occur in the whole tesseract. The nondiagonal numbers say how many of the column's element occur in or at the row's element. [7] For example, the 2 in the first column of the second row indicates that there are 2 vertices in (i.e., at the extremes of) each edge; the 4 in the second column of the first row indicates that 4 edges meet at each vertex. 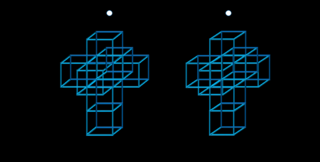 Animation showing each individual cube within the B4 Coxeter plane projection of the tesseract.

The tesseract, like all hypercubes, tessellates Euclidean space. The self-dual tesseractic honeycomb consisting of 4 tesseracts around each face has Schläfli symbol {4,3,3,4}. Hence, the tesseract has a dihedral angle of 90°. [10]

The tesseract's radial equilateral symmetry makes its tessellation the unique regular body-centered cubic lattice of equal-sized spheres, in any number of dimensions.

Since their discovery, four-dimensional hypercubes have been a popular theme in art, architecture, and science fiction. Notable examples include:

The word tesseract was later adopted for numerous other uses in popular culture, including as a plot device in works of science fiction, often with little or no connection to the four-dimensional hypercube of this article. See Tesseract (disambiguation).