From Wikipedia
(Redirected from Territory of Iowa)
https://en.wikipedia.org/wiki/Territory_of_Iowa 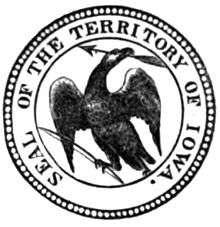 Seal of the Territory of Iowa

Most of the area in the territory was originally part of the Louisiana Purchase and was a part of the Missouri Territory. When Missouri became a state in 1821, this area (along with the Dakotas) effectively became unorganized territory. The area was closed to white settlers until the 1830s, after the Black Hawk War ended. It was attached to the Michigan Territory on June 28, 1834. At an extra session of the Sixth Legislative Assembly of Michigan held in September, 1834, the Iowa District was divided into two counties by running a line due west from the lower end of Rock Island in the Mississippi River. The territory north of this line (which started just south of the present-day Davenport) was named Dubuque County, and all south of it was Demoine County. When Michigan became a state in 1836 the area became the Iowa District of western Wisconsin Territory—the region west of the Mississippi River.

The original boundaries of the territory, as established in 1838, included Minnesota and parts of the Dakotas, covering about 194,000 square miles (500,000 km2) of land.

Burlington was the stop-gap capital; Iowa City was designated as the official territorial capital in 1841. [1]

When Iowa became a state on December 28, 1846, no provision was made for official organization of the remainder of the territory. [2] Morgan L. Martin, the Wisconsin territorial delegate to congress, pushed through a bill to organize a territory of Minnesota which would encompass this land. While the bill passed in the house, it did not pass the senate. In the following session a bill by Stephen A. Douglas was introduced in the senate but also did not pass. The situation was resolved when Minnesota Territory was organized on March 3, 1849, the day before the close of congress. [3]