From Wikipedia
https://en.wikipedia.org/wiki/Talbot_Village Jump to search 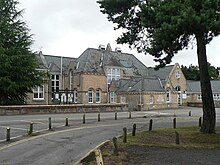 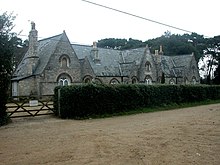 Talbot Village is located on the boundary of Bournemouth and Poole in Dorset, England.

The old Talbot Village was built between 1850 and 1862 because of the generosity of two sisters, Georgina and Mary Talbot. [1] Georgina and Mary divided their year between Surrey and Hinton Wood House on the East Cliff of Bournemouth with their family and it was while living in Bournemouth that the sisters discovered the many poor who were suffering in the region.

Between them, they sought to employ the poor to clear the land to build cottages — these were completed between 1850 and 1862. The workers were allowed to stay in the cottages and slowly, Talbot Village began to develop.

The original cottages were built on an acre plot and each had a well, animal pens and fruit trees. The residents were charged a rent of between 4 and 5 shillings per week. Georgina Talbot then had 7 almshouses built for the elderly and widowed.

The school was built for the village in 1862 and held 68 children. It has since been extended over the years and in 1992 an extension increased the school's capacity to 460 children.

Talbot Village was created to provide housing for the unemployed parishioners of Kinson; it stands apart from model villages such as the Cadbury family's Bournville which were built to house workers, who would then be able to perform their jobs with greater efficiency: the Talbot sisters received no financial return from their residents for having set up the village. [2] Georgina Talbot was motivated by the death of her elder brother and her father. She used the money to help the poor of Bournemouth and Kinson because she cared about the area. Georgina did not marry so she would be able to keep in possession of her own money and not have it taken away by husband. Georgina and her family came to Bournemouth when she was a young girl but was shocked by what she saw. There were people were begging on the streets in filth with not enough money to provide for their families. Talbot Village is not signposted as this is the way the sisters wanted it, so not many people nowadays have much interest in the history of the fascination of Talbot [3] Village.

In addition to the cottages, the village had six farms, each covering about 20 acres, to create employment and trade for the village. Three of the farm buildings survive: Highmoor Farm is still operational, White Farm served as stables into the early years of the 21st century, and Lollipop Farm has been converted into a dwelling house. Slades Farm survives only as the name of a residential district built over its land. [4]

Between 1972 and 1976 most of the buildings and several monuments in the village were listed as being of historic interest by the Department of the Environment. [5] In 1975 the Bournemouth Council designated the village as a conservation area, covering the school, church, almshouses, cottages and the surrounding plantation, known as 'Albion Woods', or 'The Backs'. [6] the village is also administered by the Talbot Village Trust — which was set up by the Georgina Talbot.

Any developments within the confines of the Conservation Area are required to 'preserve or enhance' its character and appearance – so designs have to be in keeping with the original designs. When the village was first laid out, 150 acres were set aside to remain as common land, mostly to the south of Wallisdown Road (now forming part of the Borough of Poole); this land was developed with modern housing towards the close of the 20th century. Bournemouth University has also been developed in this part of the village, partly on the site of one of the old farms. [7]