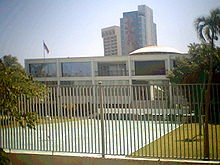 The Supreme Court Building is at the entrance of the city of San Juan.

The justices (currently nine) are appointed by the Governor of Puerto Rico and confirmed by majority vote by the Senate. One of these nine justices serves as Chief Justice; the remaining members are designated Associate Justices. Unlike the Supreme Court of the United States, the justices of the Puerto Rico Supreme Court do not serve for life, as the Puerto Rico Constitution requires that all judges must retire upon reaching age 70.

Although the Constitution of Puerto Rico provides for the Court to be composed of five justices, it also contains a provision that the number may be altered, though only by petition of the Court itself. This provision has been used four times in Court history. Immediately after the Constitution's ratification, the Court asked for two additional judges. During the early 1960s, the Court once again petitioned for the addition of two more judges, arguing that there was a case backlog on its docket. Subsequently, during the 1970s the Court asked for its number to be reduced back to seven members, arguing that the backlog had been attended to. Finally, in 2010 a 4–3 majority of the justices petitioned the Legislative Assembly to once again increase the Court's membership to 9. This decision has generated controversy since it is the first time that such a request has been done without unanimity from the justices. [3]

The term of the Puerto Rico Supreme Court begins on the first Monday of October and ends in the last week of June of the following year. However, during the recess months of July through September, an alternating panel of three justices are allowed to hear cases and their decisions are considered binding precedent. However, in order for any law passed by the Legislative Assembly to be declared unconstitutional, it requires the votes of a majority of the total membership of the Court, therefore, a three-justice panel may not hear constitutional challenges to laws passed by the Legislature.

The justices decide whether or not to hear oral arguments for the case. If the case is controversial or carries high public interest, an oral argument may be scheduled, although oral arguments were rare under Chief Justice Hernández Denton. When oral argument occurs, each side has twenty-five minutes to state its respective claims and five minutes for rebuttal. After the sides have ended their argument, each justice has ten minutes (in order of seniority) to ask questions to each side. Justices may decide to yield the balance of their time to one of their colleagues.

Because several Federal judges have voluntarily withdrawn from the Puerto Rico Bar Association and was converted by statute into a voluntary membership organization, the Supreme Court of Puerto Rico maintains the official bar records of Puerto Rico licensed attorneys.

The Chief Justice is the presiding officer of the Supreme Court, and amongst its functions it directs the administration of the different courts, chairs the Constitutional Redistricting Board which revises Puerto Rico's senatorial and representative districts after every decennial census, and presides at the impeachment trial of the Governor of Puerto Rico. [4] [5] [6] 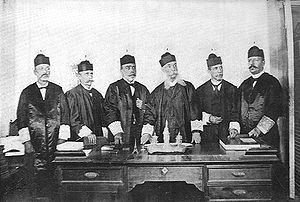 Appointments to the Supreme Court of Puerto Rico have traditionally been a politicized and often controversial process. The Governor of Puerto Rico usually appoints someone who is affiliated with his own political party.[ citation needed] For example, during his sixteen years as Governor, Luis Muñoz Marín appointed only one statehooder, Rafael Hernández Matos to the court, despite the fact that statehooders represented the largest political minority in Puerto Rico. During the four years of divided partisan control of government between 2005 and 2009, when the governorship was occupied by commonwealther Aníbal Acevedo Vilá and the Senate presidency was held by statehooder Kenneth McClintock, despite the 2005 retirement of Associate Justice Baltasar Corrada del Rio, the death of Associate Justice Jaime Fuster in 2007 and the 2008 retirement of Associate Justice Francisco Rebollo, no appointments were made. For over half a century, the Court has been dominated by justices affiliated with the Popular Democratic Party, until February 2009 when, due to the accumulation of unfilled vacancies, pro-statehood Governor Luis Fortuño was able to fill three vacancies. Added to one Justice already on the Court, appointed by another pro-statehood Governor, the justices appointed by statehooders became a majority in the Court.[ citation needed] Four women have been appointed justices since 1952; one of them, Miriam Naveira, was Chief Justice for a period of one year. Only one black, Justice Erick Kolthoff, has served in the Court. He is also the Court's only Protestant.

The recently retired Chief Justice, Liana Fiol Matta, appointed by Gov. Alejandro García Padilla, was the second woman to hold the post, succeeding Federico Hernández Denton, who was appointed in 2004 by Governor Sila Calderón. Previously, he served as an Associate Justice from 1985 to 2004. In this capacity, Chief Justice Hernández Denton has sworn in Governors Aníbal Acevedo Vilá and Luis Fortuño. Chief Justice Fiool-Matta is also the administrator of the Judicial Branch of Puerto Rico.

With the arrival of Associate Justice Oronoz, the four female justices constitute the largest number of women in history to serve on the Court simultaneously.

Of the eight current Associate Justices, five have served on the Puerto Rico Court of Appeals. Justice Anabelle Rodríguez served as Solicitor General and Attorney General of Puerto Rico, Justice Kolthoff served as a Superior Court Judge and Justice Estrella served as legal advisor to the president of the Puerto Rico Senate.

A 4–3 majority amended Rule 5 of the court's regulations to enable the most senior judge on the majority side of every case to determine the member of the Court that would write the majority opinion, which is the practice in the Supreme Court of the United States. Previously, the Chief Justice, even when on the minority side of a case, assigned the writing of the opinion of the Court. [11]

Conflicts with the US Federal Court

With the standard of review so limited, and especially after Puerto Rico attained Commonwealth status under the 1952 Constitution, the route for appeals was deemed anachronistic and was repealed in 1961 providing Puerto Rico with a judicial state-federal court structure equal to that of States. [12]

Today, decisions of the Puerto Rico Supreme Court are as final as those of any state supreme court and are reviewable by the Supreme Court of the United States only pursuant to a writ of certiorari, when an important question of federal law is involved.

In 2019, the US Supreme Court decided that on the point of double jeopardy, Puerto Rico was not sovereign; thus could not charge someone with crimes that the person had already been tried for, in the United States. [13] [14]