In the field of 3D computer graphics, a subdivision surface is a curved surface represented by the specification of a coarser polygonal mesh and produced by a recursive algorithmic method. The curved surface, the underlying inner mesh, [1] can be calculated from the coarse mesh, known as the control cage or outer mesh, as the functional limit of an iterative process of subdividing each polygonal face into smaller faces that better approximate the final underlying curved surface. Less commonly, a simple algorithm is used to add geometry to a mesh by subdividing the faces into smaller ones without changing the overall shape or volume. 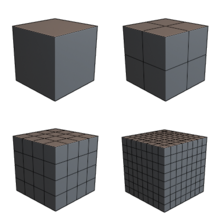 Simple subdivision of a cube up to 3

This process produces a denser mesh than the original one, containing more polygonal faces (often by a factor of 4). This resulting mesh can be passed through the same refinement scheme again and again to produce more and more refined meshes. Each iteration is often called a subdivision level, starting at zero (before any refinement occurs).

The limit subdivision surface is the surface produced from this process being iteratively applied infinitely many times. In practical use however, this algorithm is only applied a limited, and fairly small (

Mathematically, the neighborhood of an extraordinary vertex (non-4- valent node for quad refined meshes) of a subdivision surface is a spline with a parametrically singular point. [2]

In general, approximating schemes have greater smoothness, but the user has less overall control of the outcome. This is analogous to spline surfaces and curves, where Bézier curves are required to interpolate certain control points, while B-Splines are not (and are more approximate).

Subdivision surface schemes can also be categorized by the type of polygon that they operate on: some function best for quadrilaterals (quads), while others primarily operate on triangles (tris). 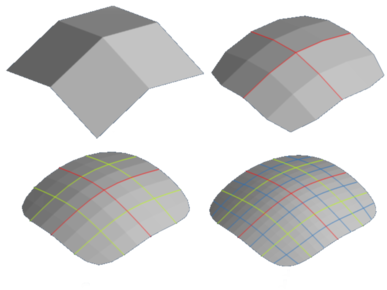 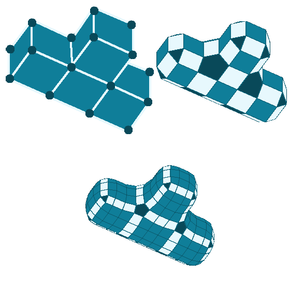 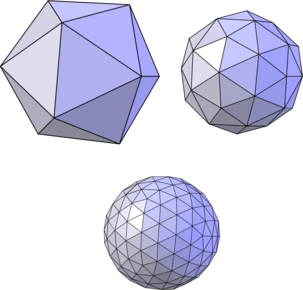