From Wikipedia
https://en.wikipedia.org/wiki/Southern_Vectis Jump to search
British bus operator on the Isle of Wight, England

Southern Vectis [1] is a bus operator on the Isle of Wight. The company was founded in 1921 as "Dodson and Campbell" and became the "Vectis Bus Company" in 1923. The company was purchased by the Southern Railway before being nationalised in 1969. In 1987, the company was re-privatised. Southern Vectis was accused of unfair trade practices and was investigated by the British Office of Fair Trading. In July 2005, it became a subsidiary of Go-Ahead Group.

In 1921 in Cowes, the company was founded as "Dodson & Campbell". [2] In 1923, the company was renamed the "Vectis Bus Company". "Vectis" is the Roman name for the Isle of Wight. The buses were built by the London bus body builder, Christopher Dodson.

Double-deckers at Ryde depot in 1979

In 1929, the company was purchased by Southern Railway and was incorporated as "The Southern Vectis Omnibus Company Limited". [1]

In 1948, Southern Railway was nationalised and then in 1969, Southern Vectis became part of the National Bus Company.

In 1986, with deregulation after the passing of the Transport Act 1985, the business was sold in a management buy out. [3] [4] Five new operators entered the market on the Isle of Wight.

In 1987, Southern Vectis started Badger Vectis in Poole, and Solent Blue Line in Southampton. The new operations used older Southern Vectis buses and second-hand double-deckers. [5] Southern Vectis also moved into other business areas on the isle of Wight. The company bought a self-drive van hire firm. It also bought two Ford Granada taxis, which it ran from the Cowes pontoon and began taxibus services which continued till 1989. [6]

In July 2005, Southern Vectis and Solent Blue Line were sold to the Go-Ahead Group and became part of Go South Coast. [9]

In April 2006, the network was changed with Newport the hub and other routes linking to it. Some routes, for example the "Island Explorer" were lost. However, the changes proved successful. Within 18 months, passenger numbers had increased by 45 percent. This included a 14 percent growth in fare-paying customers. [10]

In October 2009, Southern Vectis launched a website promoting a car scrappage scheme. This offered Island residents a season ticket of bus journeys for use in the next twelve months if they agreed to scrap their car. Southern Vectis announced that five vehicles had been scrapped within the first fortnight of the promotion and it had received around 6,000 enquiries. [11] [12]

Business practices in the deregulated market 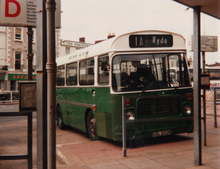 The newly privatised Southern Vectis responded with a number of new business practices. These practices raised the interest of the Office of Fair Trading who, in 1987, investigated the company and found their behaviour to be anti-competitive. [2] [14]

It was alleged that Southern Vectis was engaged in "duplication", running buses immediately ahead of competitors' where routes coincided, and having their drivers lie in wait for competitors' vehicles in order to beat them to waiting passengers. [15] In 1991, duplication tactics were seen again when Southern Vectis shadowed an Isle of Wight County Council contracted bus run by Norman Baker Taxis. [14]

In 1986, Southern Vectis acquired Newport bus station as part of their privatisation and refused competitors access to it. [16] The Office of Fair Trading report, published in 1988, found Southern Vectis' behaviour to be anti-competitive. Southern Vectis was told to either allow competitors to use the bus station or appear before the Competition Commission. Gange's Minicoaches, the plaintiff, was offered use of "Stand F" in Ryde bus station, and was also offered a stand in the Newport bus station. However, Gange's did not find the charges set for either station agreeable, and continued to operate from the opposite side of Ryde bus station on council land and the South Street bus stop in Newport, until their service discontinued.

Southern Vectis started to franchise its routes[ when?]. [14] For instance, Southern Vectis franchised Solent Blue Line routes to Marchwood Motorways; the Newport Town Circular was franchised to M-Travel, and then the Alpha Group after M-Travel closed. The Traditional Bus Company and The Village Bus Company were franchised some open-top routes including the Shanklin Pony.

In 2008, after its sale to Go-Ahead Group, Southern Vectis competed directly with the Isle of Wight Council's Wightbus school services. It duplicated routes and claimed term ticket fees for student passengers from the council. [17] In September 2010, the Isle of Wight council engaged Southern Vectis to operate many school bus routes. Under the terms of the contract, the general public were not able to use these services.

In 2009, Southern Vectis operated fifteen standard bus services, [18] the most frequent being route 1, running every 7–8 minutes. [19] Night buses ran on some routes on Friday and Saturday nights: [4] 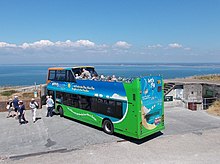 In 2007, an "Island Coaster" service started between Ryde and Alum Bay with a ten-pound all day ticket or longer period tickets for local residents. [20] [21] [22] The Island Coaster followed the route of two former services, the "12" from Ryde to Sandown and the "7/7A" from Sandown to Alum Bay. Stops were at Freshwater Bay and Blackgang Chine, linking them with Ventnor, Shanklin, Sandown and Ryde. To get between Blackgang Chine and Brook near Brighstone, the service used the Military Road.

The 2008 season began on 15 March and finished on 2 November 2008. Some changes were made. Route number "X40" was removed (although still displayed on buses). There was no stop at the Bembridge Coast Hotel or Sandown Esplanade. In 2009, there was only one morning and one afternoon journey each way, one of which terminated or started in Shanklin rather than Ryde and reached from Freshwater Bay to Yarmouth, but not reaching Alum Bay. Coaches were used rather than buses. [23] [24] [25]

Until September 2009, three tourist road trains operated along the seafront of three island towns, Ryde, Shanklin and Sandown. The services were run by Southern Vectis under contract to Isle of Wight Council. In April 2010, it was announced that the vehicles would be retired due to increased maintenance costs. In January 2011, the Dotto Trains were sold to a dealer in Llandudno. [26]

An Open Top Christmas Lights Tour has been operated. One of the company's "Island Breezer" liveried buses took a two-hour journey past the most illuminated houses on the island. [31] For the 2008 tour, a stop at the Old World Tea Rooms in Godshill was added for a complimentary mince pie and a hot drink. [32]

In 2009, the company ran the "Sailbus" during Cowes Week. [33] There was decreased patronage due to new fares and the service did not run the following year. [34]

Southern Vectis has increased its fares in reflection of its strong market position and lack of effective competition. Southern Vectis fares have also reflected the need to provide free transport to a relatively large population of elderly people who reside on the Isle of Wight. [35] [36]

Students under 19, in full-time education on the Isle of Wight, have received discounted fares under the Isle of Wight Council's Student Rider scheme. [37] In July 2010 after cuts in funding from the UK government to local authorities, the scheme was ended.

Island residents and visitors living in England over the qualifying age or with a disability have travelled for free in the council area at any time of day, under the Government's England-wide scheme. In 2007, the Isle of Wight council reduced its reimbursement to Southern Vectis for free-travelling passengers from 76 percent to 46 percent. [38] In 2009, concessionary travel accounted for just under half of all journeys on Southern Vectis buses. [10] In 2010, free travel was restricted to off-peak times. [39]

In 2014, the company had 105 vehicles. These included Enviro 200's single deck buses replacing the Dennis Dart SLF's; seven Volvo B7TL/ Plaxton President double deck buses of which two are open-top; twenty-eight Scania OmniCitys of which one has been converted to open-top following an engine fire; and sixteen Alexander Dennis Enviro 400's, of which six are on loan.

In 2016, the company took delivery of ten Alexander Dennis Enviro 400's, which replaced the five remaining closed top Volvo B7TL/Plaxton Presidents, and a tenth Enviro200 later that year. In 2017 Southern Vectis took delivery of their first "second generation" Alexander Dennis Enviro 400 MMC. In 2018, the company took delivery of 16 more with onboard "next stop" announcements and a more spacious and brighter interior. In 2019, Southern Vectis regained one of their old Dennis Dart/ Plaxton Pointer MPD's, and a Scania OmniCity single decker.

Vectis Blue, the coach fleet, had twenty Alexander Dennis double deckers and around fifteen Optare Solos as well as a few vehicles acquired from Go South Coast subsidiaries. All of the coaches have seatbelts. [46]

In April 2006, almost all the buses were painted in two shades of green with a new logo and slogan, "The Island's Buses". [47] In 2014, some open-top routes had a blue and orange livery, with "Island Breezers" branding.