The U.S. Geological Survey considers the Southeast region to be Alabama, Florida, Georgia, Arkansas, Louisiana, Mississippi, North Carolina, South Carolina, and Tennessee, plus Puerto Rico and the U.S. Virgin Islands. There is no official Census Bureau definition of the southeastern United States; instead, they divide a larger region including Texas and Oklahoma designated as the "South" into three subregions none of which are conventionally considered to define the southeast. The nonprofit American Association of Geographers defines the southeastern United States as Alabama, Florida, Georgia, Kentucky, Mississippi, North Carolina, South Carolina, Tennessee, Maryland, Virginia, and West Virginia. [2] The OSBO (American small business support organization) uses the same states, but includes Arkansas and Louisiana. The state of Delaware plus the District of Columbia are also sometimes added in some definitions of the term.

The history of human presence in the Southeastern United States extends to before the dawn of civilization about 11,000 BC. The earliest artifacts were from the Clovis culture.

Prior to the arrival of Europeans, Native Americans of the Woodland period tradition occupied the region for several hundred years.

The first Europeans to arrive in the region were conquistadors of the Spanish Empire. In 1541, Hernando de Soto journeyed through the south and crossed the Mississippi River.

The region hosted the first permanent European settlement in North America, by the Kingdom of England at Jamestown, Virginia in 1607.

Prior to and during the American Civil War (1861-1865), the Confederate States of America consisted of the southeastern states plus Texas, i.e., Florida, Alabama, Georgia, Mississippi, Tennessee, South Carolina, North Carolina, Virginia, Louisiana, Arkansas, and Texas. Kentucky and Maryland were neutral border states that eventually joined the Union.

Much of the Southeast observed Jim Crow laws during the American segregation era.

The predominant culture of the Southeast has its origins with the settlement of the region by British colonists and African slaves in the 17th century, as well as large groups of English, Scots and Ulster-Scots, Germans, Spanish, French, and Acadians in succeeding centuries. Since the late 20th century the New South has emerged as the fastest growing area of the United States economically. Multiculturalism has become mainstream in the Southeastern states. African Americans remain a dominant demographic at around a 30% of the total population of the Southeast. The New South is built upon the metropolitan areas along the interstate 85 corridor. Cities include Birmingham, Atlanta, Greenville, Spartanburg, Charlotte, Greensboro, Winston-Salem and Raleigh-Durham.

Seasonally, summers are generally hot and humid throughout the entire region. The Bermuda High pumps hot and moist air mass from the tropical Atlantic Ocean and eastern Gulf of Mexico westward toward the southeast United States, creating the typical sultry tropical summers. Daytime highs are often in the upper 80's to lower 90's F. [4] [5] Rainfall is summer concentrated along the Gulf Coast and the South Atlantic coast from Norfolk, VA southward, reaching a sharp summer monsoon like pattern over peninsular Florida, with dry winters and wet summers. Sunshine is abundant across the southeastern United States in summer, as the rainfall often comes in quick, but intense downpours. The mid-South, especially Tennessee, and the northern halves of Mississippi, Alabama and Georgia, have maximum monthly rainfall amounts in winter and spring, owing to copious Gulf moisture and clashes between warm, moist air from the Gulf of Mexico and cold, dry air from Canada during the cold season. Here, December, March or April are typically the wettest months; August to October, the driest months (for example, at Tupelo, MS, Huntsville, AL and Memphis, TN).

Winters are cool in the northern areas like Tennessee, Virginia, Maryland, and western North Carolina, with average highs in the 45 °F (7 °C) range in January. Farther south, winters become more mild across interior eastern North and South Carolina, Georgia, and Alabama, with average January highs in the 53 °F (12 °C) range. As one nears the Gulf of Mexico coastal plain and coastal areas of Georgia and the Carolinas, winters become warm, with daytime highs near or over 60 °F (16 °C), until far enough south in central Florida where daytime highs are above 70 °F (21 °C). Winters tend to be very dry and sunny across Florida, with a gradual increase in winter rainfall with increasing latitude, especially west of the Appalachian Mountains.

The Southeast has changed dramatically in the last two generations. Since 1980, there has been a boom in its service economy, manufacturing base, high technology industries, and the financial sector. Examples of this include the surge in tourism in Florida and along the Gulf Coast; numerous new automobile production plants such as Mercedes-Benz in Tuscaloosa, Alabama; Hyundai in Montgomery, Alabama; Toyota Motors in Blue Springs, Mississippi; Kia in West Point, Georgia; the BMW production plant in Greer, South Carolina; Volkswagen in Chattanooga, Tennessee; the GM manufacturing plant in Spring Hill, Tennessee; the Volkswagen manufacturing plant in Pulaski, Virginia;and the Nissan North American headquarters in Franklin, Tennessee; the two largest research parks in the country: Research Triangle Park in the Triangle area of North Carolina (the world's largest) and the Cummings Research Park in Huntsville, Alabama (the world's fourth largest); and the corporate headquarters of Verso Paper in Memphis, as well as FedEx, which is one of the world's largest shipping companies.

Fortune 500 companies having headquarters in the region include 20 in Virginia, 16 in Florida, 15 in North Carolina, and 14 in Georgia. This economic expansion has enabled parts of the South to have of some of the lowest unemployment rates in the United States. [6] In Alabama, there is a large-scale manufacturing project owned by the German steel megacorporation ThyssenKrupp, which operates a massive, state-of-the-art facility in Mobile.

Research Triangle Park, in the Raleigh-Durham urban area of North Carolina, has emerged as a major hub of technology, governmental, and biotechnological research and development, as has the Virginia BioTechnology Research Park in Richmond. The Cummings Research Park in the Huntsville, Alabama area is the second largest research complex in the nation. Located in Huntsville is the Redstone Arsenal, United States Army Missile Command, the U.S. Space & Rocket Center, NASA's Marshall Space Flight Center and many other key government, military, and aerospace agencies. Tullahoma, TN contains Arnold Air Force Base. The base is home to the Arnold Engineering Development Complex (AEDC), the most advanced and largest complex of flight simulation test facilities in the world.

The National High Magnetic Field Laboratory in Tallahassee, Florida, is the largest laboratory in the world devoted to the study of magnetism.[ citation needed] The University of South Carolina is currently constructing a research campus in downtown Columbia, and the university is the nation's only National Science Foundation-funded Industry/University Cooperative Research Center for Fuel Cells. [7] 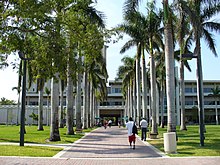 The region includes a number of notable universities, public and private, whose research exert influence globally. Chief among these are:

There are a number of well-known private institutions, as well. Notable among these are:

The region is home to the greatest number of historically black colleges and universities in the nation. The three largest in the region are North Carolina A&T University, Florida A&M University, and Jackson State University.

These are the metropolitan areas of the Southeastern region which exceed 1 million in population according to the United States Census Bureau's 2016 estimates: [9]

Beyond Megalopolis by Virginia Tech's Metropolitan Institute, an attempt to update Jean Gottmann's work with current trends, defines two " megapolitan areas" contained within the Southeast, out of a total of ten such areas in the United States:

Two others tie some areas on the margins of the Southeast to urban centers in other regions:

These are the combined statistical areas of the Southeastern region which exceed 1 million in population according to the United States Census Bureau's 2016 estimates. Note that the metropolitan areas of Tampa and Richmond are not included in any CSAs, so they are included in the table without constituent areas. [10]

Although American football is prevalent across the United States, it is especially pervasive in the Southeast. With a total of nine (9) franchises — the Atlanta Falcons, the Baltimore Ravens, the Carolina Panthers, the Jacksonville Jaguars, the Miami Dolphins, the New Orleans Saints, the Tampa Bay Buccaneers, the Tennessee Titans, and the Washington Redskins — across the region, the National Football League (NFL) maintains a stronger commercial presence than any other major North American professional sports league.

The Southeast has seven (7) National Basketball Association (NBA) franchises: the Atlanta Hawks, the Charlotte Hornets, the Memphis Grizzlies, the Miami Heat, the New Orleans Pelicans, the Orlando Magic, and the Washington Wizards.

The Southeast has five (5) National Hockey League (NHL) franchises: the Carolina Hurricanes, the Florida Panthers, the Nashville Predators, the Tampa Bay Lightning, and the Washington Capitals.

The southeast also hosts two of the three legs of the American Triple Crown. The Kentucky derby, in Kentucky. The Preakness Stakes are also located in the Southeast, being run in Baltimore, the Derby is considered the western leg of the crown and the Preakness is traditionally considered the southern leg.