Logo of the Soo Line Railroad from the 1970s

The Soo Line Railroad ( reporting mark SOO) is the primary United States railroad subsidiary of the Canadian Pacific Railway ( reporting mark CP), one of seven U.S. Class I railroads, controlled through the Soo Line Corporation. Although it is named for the Minneapolis, St. Paul and Sault Ste. Marie Railroad (MStP&SSM), which was commonly known as the Soo Line after the phonetic spelling of Sault, it was formed in 1961 by the consolidation of that company with two other CP subsidiaries: The Duluth, South Shore and Atlantic Railroad, and the Wisconsin Central Railroad. It is also the successor to other Class I railroads, including the Minneapolis, Northfield and Southern Railway (acquired 1982), and the Chicago, Milwaukee, St. Paul and Pacific Railroad (Milwaukee Road, acquired at bankruptcy in 1985). On the other hand, a large amount of mileage was spun off in 1987 to Wisconsin Central Ltd., now part of the Canadian National Railway. The Soo Line and the Delaware and Hudson Railway, the CP's other major subsidiary (before the 2008 DM&E acquisition), presently do business as the Canadian Pacific Railway, and most equipment has been repainted into the CP scheme, but the U.S. Surface Transportation Board groups all of CP's U.S. subsidiaries under the Soo Line name for reporting purposes. [1] The Minneapolis headquarters are located in the Canadian Pacific Plaza building, having moved from the nearby Soo Line Building.

The company's main line begins at Portal, North Dakota on the Canada–US border, and extends southeast along former MStP&SSM trackage to the Twin Cities ( Minneapolis-St. Paul). Ex-Milwaukee Road trackage takes the Soo Line from the Twin Cities to Chicago via Milwaukee. Between Chicago and Detroit, where the CP-owned Detroit River Tunnel connects back into Canada, the Soo Line has trackage rights over the Norfolk Southern Railway and haulage rights over CSX Transportation.

Major branches include a connection from the border at Noyes to Glenwood, Minnesota and, until it was sold to the Indiana Rail Road in 1983, a line from Chicago to Louisville, Kentucky.

Through trackage rights over the BNSF Railway, the Soo Line also serves Duluth from the Twin Cities. [2]

At the end of 1970, the Soo Line operated 4693 miles of road on 6104 miles of track; that year it reported 8249 million ton-miles of revenue freight and no passengers. 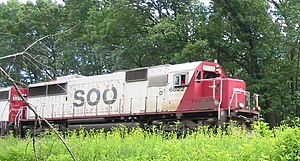 The present Soo Line Railroad Company was incorporated October 19, 1949 in Minnesota as the Duluth, South Shore and Atlantic Railroad, as part of the plan for reorganizing the Duluth, South Shore and Atlantic Railway and subsidiary Mineral Range Railroad. When CP consolidated several subsidiaries on January 1, 1961, it used this company to merge the Minneapolis, St. Paul and Sault Ste. Marie Railroad and Wisconsin Central Railroad into, and renamed it to the present name, Soo Line Railroad. The Soo Line gained control of the Minneapolis, Northfield and Southern Railway (MNS), a Twin Cities-area short line, in June 1982. [3]

Passenger service was mostly eliminated by the 1961 merger, but several trains remained for a few more years. These were a Saint Paul to Duluth daytime train known only as Trains 62 and 63 (discontinued June 1961); [4] the overnight Chicago to Duluth Laker and its Saint Paul connection (both discontinued January 15, 1965); [5] the Twin Cities to Winnipeg Winnipeger (discontinued March 25, 1967); [5] and the Saint Paul to Portal, North Dakota Soo-Dominion that during the summer, ran through to Vancouver via a connection with Canadian Pacific Railway's The Dominion at Moose Jaw. It was discontinued in December 1963, [6] and the western Canada cars were handled on the Winnipeger for two more summers before they too were pulled. The Soo Line's last passenger train was the Copper Country Limited, a joint service with the Milwaukee Road inherited from the Duluth, South Shore and Atlantic. This Chicago- Champion- Calumet service was discontinued May 8, 1968. [5] In addition, there were several mixed trains, with additional ones created to enable the discontinuance of the Saint Paul to Portal passenger train. Some mixed train services gained notoriety because passengers were conveyed in one direction only.

In 1984, CP incorporated the Soo Line Corporation in Minnesota as a holding company, exchanging stock in December to give the Soo Line Corporation total control over the railroad. Two months later, on February 19, 1985, the Soo Line purchased the property of the bankrupt Chicago, Milwaukee, St. Paul and Pacific Railroad and assigned it to a newly created subsidiary, The Milwaukee Road, Inc. This company and the MN&S were both merged into the Soo Line Railroad effective January 1, 1986. To cut costs, the Soo Line created the Lake States Transportation Division (LSTD) on February 10, 1986 [7] to operate the less-important lines, including the ex-Wisconsin Central line between Chicago and the Twin Cities. Unable to implement its proposed labor rule changes, the Soo Line sold the approximately 2,000-mile (3,200 km) LSTD to a new regional railroad, Wisconsin Central Ltd., in 1987 for $133 million. [8] In 1990, CP gained full control of the Soo Line Corporation, of which it had previously owned about 56% of the common stock. [3] In the 2000s, the Soo line was consolidated into CP. Only a few Soo locomotives remain in the old paint scheme; most have been repainted into CP paint or scrapped. Today, the Milwaukee Road and Soo Line's trackage make up the historically logical route of the Canadian Pacific Railway.

The Presidents of the Soo Line Railroad were: [9]

Some of the railroad's diesel locomotives have been preserved:

In addition, a number of the railroad's 145 steel cabooses have been preserved. 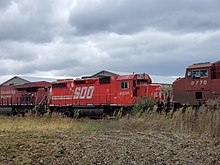 The Soo Line Trail in Minnesota was created from former pieces of the railroad which has extended down into the Lake Wobegon Trail. The trails are enjoyed by walkers, runners, and bikers in the area and prized for how flat they are.