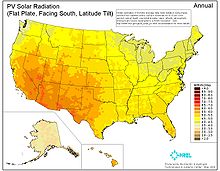 Solar potential in the United States

Solar power in Missouri is capable of generating 42.7% of the electricity used in Missouri from rooftop solar panels totaling 28,300 MW. [1][ improper synthesis?]

Net metering is available only during a billing period. Excess generation is credited at avoided cost rate, and lost if any remains after a year, [2] giving the state a B rating. [3]

IKEA installed a 1.28-MW solar array on its St. Louis store which was the largest rooftop installation in the state. It was completed in July 2015. [4] [5]

Missouri's largest solar farm is located in Christian County, just outside of Nixa, Missouri on a plot owned by Gardener Capital. The farm generates 9% of the power needs of Nixa, Missouri transmission grid. [6]