From Wikipedia
https://en.wikipedia.org/wiki/Socialist_Republic_of_Serbia Jump to search
Former federated state of Yugoslavia between 1945 and 1992 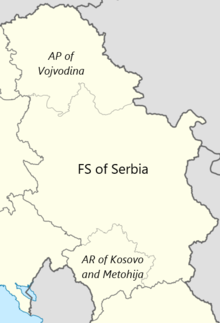 Map of Federated State of Serbia (1945), with Autonomous Province of Vojvodina and Autonomous Region of Kosovo and Metohija
Further information: History of Serbia

Main articles: Axis occupation of Serbia and Territory of the Military Commander in Serbia

After the collapse of the Kingdom of Yugoslavia in the April War (1941), the entire country was occupied and partitioned between Axis powers. Central territories of Serbia and the northern region of Banat were occupied by Nazi Germany, that enforced direct control over the Territory of the Military Commander in Serbia, with a puppet Government installed in Belgrade. Southern regions of Metohija and Kosovo were occupied by Fascist Italy and annexed into the Italian Albania. Region of Bačka was annexed by Hungary, while Syrmia was possessed by the Independent State of Croatia. Southeastern parts of Serbia were occupied by Bulgaria. [4]

At the beginning of the occupation, there were two resistance movements: Chetniks and Partisans. They had conflicting ideological and political programs, and by 1943, Chetniks started to collaborate with Axis forces. Partisans advocated transformation of Yugoslavia into a federation, with Serbia becoming one of its federal units. In the autumn of 1941, first provisional institutions were established by partisans in some liberated territories, headed by the Main National Liberation Committee for Serbia. It was seated in Užice, and thus the movement became known as the Republic of Užice. However, the German offensive crushed this proto-state in December of the same year. After that, main partisan forces moved to Bosnia. [5]

Flag of the Federated State of Serbia, in 1945

Serbia was liberated in the autumn of 1944, by partisan forces and the Red Army. Soon after the liberation of Belgrade on 20 October, creation of new administration was initiated. In November 1944, the Anti-fascist Assembly for the People's Liberation of Serbia was convened, affirming the policy of reconstituting Yugoslavia as a federation, with Serbia as one of its federal units. Thus was laid the foundation for the creation of the Federated State of Serbia ( Serbian: Федерална Држава Србија), as a federated state within new Democratic Federal Yugoslavia. [6] [7]

The process was formalized in April 1945, when the provisional People's Assembly of Serbia was created, also appointing the first People's Government of Serbia. Within Serbia, two autonomous units were created: Autonomous Province of Vojvodina and Autonomous Region of Kosovo and Metohija. On November 29 (1945), Yugoslavia was officially proclaimed as federal republic, and in January 1946, after the first Constitution of federal Yugoslavia was adopted, the Federated State of Serbia was renamed to People's Republic of Serbia ( Serbian: Народна Република Србија / Narodna Republika Srbija). [8] [9]

In 1963, new Yugoslav Constitution was adopted, renaming the federal state into the Socialist Federal Republic of Yugoslavia, and its federal units into socialist republics, thus introducing the name: Socialist Republic of Serbia ( Serbian: Социјалистичка Република Србија). [13] [14]

In 1966, one of the most prominent Serbs in the Communist party and also vice-president of Yugoslavia (1963-1966) and founder of Yugoslav intelligence agency OZNA, Aleksandar Ranković was removed from positions due to allegations of spying on SFRY President Josip Broz Tito. [15] [16]

After the Croatian Spring in 1971, almost whole party leadership of Serbia was removed from office, under the charge of being "liberal". Latinka Perović and Marko Nikezić were marked as leaders of this liberal movement inside League of Communists of Serbia.

In 1974, new constitution was adopted, increasing the powers of provinces, and making them de facto republics. For the first time the institution of president was formed, as President of the Presidency of Socialist Republic of Serbia. Assembly was electing 15 members of the presidency and one president for a 4 -year term, and later 2-year term. The new constitution practically suspended Serbia's authority over the provinces.

After the new constitution was adopted, mistakes became obvious. Dragoslav Marković, then President of Serbia ordered a secret study on this issue. The study was completed in 1977 and was named The Blue Book.

For most of its existence in the SFRY, Serbia was loyal and generally subordinate to the federal government. This changed after the death of Josip Broz Tito in 1980, when Albanian, as well as Serbian nationalism in Kosovo arose. In 1981 a major protests erupted in Kosovo demanding the status of republic. The League of Communists was split on how to respond. At the same time, economic crisis in Yugoslavia started. The leaders of the country were unable to make any reforms, thanks to the political instability.

President of League of Communists of Serbia Slobodan Milošević visited Kosovo in April 1987 and promised rapid action in order to protect peace and Serbs of Kosovo. Ethnic tensions in Kosovo were heated up when Kosovo Albanian soldier opened fire on his fellow soldiers in Paraćin, in an event known as Paraćin massacre. Then President of Serbia Ivan Stambolić wanted to make compromise, rather than fast solution. He found himself in a clash with Milošević. This conflict culminated with 8th Session and replacement of Stambolić with Petar Gračanin as President of Serbia.

In 1988, new amendments to the Yugoslav Constitution were adopted, initiating a process of democratization. During 1988 and 1989, a successful round of coups in the Communist party leadership, known as Antibureucratic revolution, in Vojvodina, Kosovo as well as Montenegro, replaced autonomous leaderships in this regions. The coups were led by Slobodan Milošević; supporter of Serbian nationalism. The events were condemned by the communist governments of the western Yugoslav republics (especially SR Slovenia and SR Croatia), who successfully resisted the attempts to expand the revolt onto their territories, and turned against Milošević. The rising antagonism eventually resulted in the dissolution of the ruling League of Communists of Yugoslavia in 1990, and subsequently in the breakup of Yugoslavia.

In 1989, Slobodan Milošević was elected as President of the State Presidency of Serbia. He demanded that the federal Yugoslav government act for the interests of Serbia in Kosovo by sending in the Yugoslav People's Army to suppress separatism in the province. At the same time, several reforms of federal electoral system were proposed, with Serbia supporting a "one-citizen, one-vote" system, which would have given a majority of votes to Serbs. By that time, ethnic tensions in Yugoslavia increased, and the ruling League of Communists of Yugoslavia collapsed, followed by the crisis of federal institutions. After these events, in 1989 Assembly of Socialist Republic of Serbia voted for constitution amendments that revoked high autonomy for provinces of Vojvodina and Kosovo.

After Slovenian authorities forbid a group of Serbs supporting his politics to gather in Ljubljana, Milosević started a trade war with Socialist Republic of Slovenia in late 1989. This Serbian-Slovenian conflict culminated in January 1990 on 14th Congress of the League of Communists of Yugoslavia when Slovenians left the meeting followed by Croatian delegates. [17]

After 1990, the state was known simply as Republic of Serbia ( Serbian: Република Србија / Republika Srbija), and in December of the same year, Slobodan Milošević was elected as first President of the Republic. In 1992, when the Federal Republic of Yugoslavia was formed, Serbia became one of its two constituent republics. In 2003 this state union was re-formed into Serbia and Montenegro, [18] and in 2006 Serbia became an independent republic after Montenegro separated.

Geographically SR Serbia bordered Hungary to the north, Romania and Bulgaria to the east and Albania to the south-west. Within Yugoslavia, it bordered SR Macedonia to the south and SR Montenegro , Bosnia and Herzegovina and Croatia to the west. 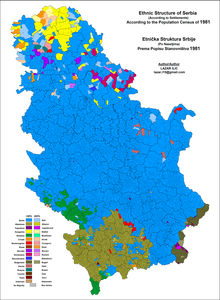 In 1971, total population of the Socialist Republic of Serbia numbered 8,446,591 people, including:

In 1981, total population of the Socialist Republic of Serbia numbered 9,313,677 people, including:

During the socialist era in Yugoslavia, the only legal political party was the League of Communists of Serbia (SKS), which was part of the League of Communists of Yugoslavia (SKJ). The party remained relatively stable and loyal to the federal party until the late 1980s, when the party became split over what action to take in Kosovo when protests and fights broke out between ethnic Albanians and Serbs.

The more traditional Communists supported President Ivan Stambolić, who advocated continued neutrality as a means to solve the dispute; while more radical and nationalist-leaning members supported Slobodan Milosević, who advocated the protection of Kosovo Serbs, who had claimed that their population was being pressured to leave Kosovo by Albanian separatists. Milosević utilized public sentiment and opposition to Kosovo Albanian separatism to rally large numbers of supporters to help him overthrow the Communist leadership in Vojvodina, Kosovo and the Socialist Republic of Montenegro in what was known as the anti-bureaucratic revolution. Afterward, the Serbian League of Communists selected Milosević as its leader. Milosević took a hard stand on Albanian nationalism in Kosovo and pressured the Yugoslav government to give him emergency powers to deal with Kosovo Albanian separatists. Furthermore, he reduced the autonomy of the autonomous provinces of Kosovo and Vojvodina and installed politicians loyal to him to serve as their representatives.

In the congress of the Yugoslav League of Communists in 1990, Milosević and his subordinate representatives for Vojvodina, Kosovo and the Socialist Republic of Montenegro attempted to silence opposition from the Socialist Republic of Slovenia who opposed the actions taken against Kosovo Albanian leadership, by blocking all reforms proposed by the Slovene representatives. The tactic failed and Slovenia, along with its ally Croatia, abdicated from the Yugoslav Communist Party. This caused the Yugoslav Communist party to fall apart, and then the state of Yugoslavia itself one year later.

Since 1945, the most senior state official in Serbia, and thus de facto head of state, was President of the People's Assembly of Serbia, who also presided over the collective Presidency of the People's Assembly (1945-1953), and Presidency of the Assembly (1953-1990). In 1974, new Constitution of Serbia was adopted, and collective state presidency was formed, not as a committee of the Assembly, but as a supreme governing body. Since then, President of the Presidency served as the most senior state official of the Socialist Republic of Serbia. At first, President was elected for 4 years mandate, but in 1982 it was lowered to 2 years.

Petar Stambolić, President of the National Assembly of Serbia (1953-1957) 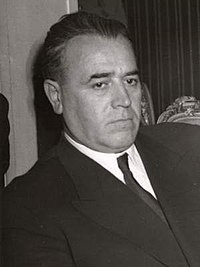 Blagoje Nešković, President of the People's Government of Serbia (1945-1948)