The smallmouth bass (Micropterus dolomieu) is a species of freshwater fish in the sunfish family ( Centrarchidae) of the order Perciformes. It is the type species of its genus. One of the black basses, it is a popular game fish sought by anglers throughout the temperate zones of North America, and has been spread by stocking—as well as illegal introductions—to many cool-water tributaries and lakes in Canada and more so introduced in the United States. The maximum recorded size is approximately 27 inches and 12 pounds. The smallmouth bass is native to the upper and middle Mississippi River basin, the Saint Lawrence River– Great Lakes system, and up into the Hudson Bay basin. Its common names include smallmouth, bronzeback, brown bass, brownie, smallie, bronze bass, and bareback bass. 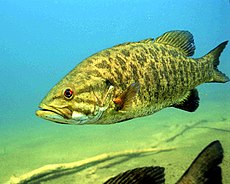 The smallmouth bass is generally brown, appearing sometimes as black or green (seldom yellow) with red or brown eyes, and dark brown vertical bands, rather than a horizontal band along the side. There are 13–15 soft rays in the dorsal fin. The upper jaw of smallmouth bass extends to the middle of the eye. The smallmouth's coloration and hue may vary according to environmental variables such as water clarity or diet.

Males are generally smaller than females. The males tend to range around two pounds, while females can range from three to six pounds. Their average sizes can differ, depending on where they are found; those found in American waters tend to be larger due to the longer summers, which allow them to eat and grow for a longer period of time.

Their habitat plays a significant role in their color, weight, and shape. River water smallmouth that live in dark water tend to be rather torpedo-shaped and very dark brown to be more efficient for feeding. Lakeside smallmouth bass, however, that live in sandy areas, tend to be a light yellow-brown and are more oval-shaped. 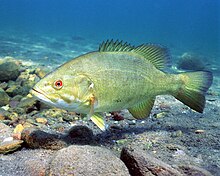 The smallmouth bass is found in clearer water than the largemouth, especially streams, rivers, and the rocky areas and stumps and also sandy bottoms of lakes and reservoirs. The smallmouth prefers cooler water temperatures than its cousin the largemouth bass, and may be found in both still and running water. Because it is intolerant of pollution, the smallmouth bass is a good natural indicator of a healthy environment, though it can better adjust to changes in water condition than most trout species. Carnivorous, its diet comprises crayfish, insects, and smaller fish, while the larvae feed on various zooplankton. [3]

The female can lay up to 21,100 eggs, which are guarded by the male in his nest.[ citation needed]

When the weather gets colder, and the water temperature drops below 15 C (60 F), smallmouth will often migrate in search of deeper pools in which they enter a semi-hibernation state, [4] moving sluggishly and feeding very little until the warm season returns. [4] The migration patterns of smallmouth have been tracked and it is not unusual for a smallmouth to travel 12 miles in a single day [4] in a stream, creek or river. [4] The overall migration can exceed 60 miles. [4]

Illustration of a group of smallmouth bass 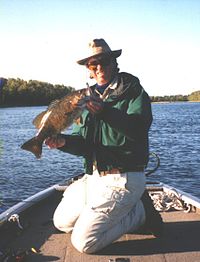 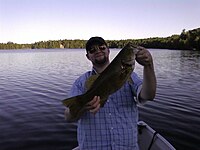 In the United States, smallmouth bass were first introduced outside of their native range with the construction of the Erie Canal in 1825, extending the fish's range into central New York state. During the mid-to-late 19th century, smallmouth were transplanted via the nation's rail system to lakes and rivers throughout the northern and western United States, as far as California. Shippers found that smallmouth bass were a hardy species that could be transported in buckets or barrels by rail, sometimes using the spigots from the railroad water tanks to aerate the fingerlings. They were introduced east of the Appalachians just before the Civil War, and afterwards transplanted to the states of New England. [5] [6]

With increased industrialization and land use changes, many of the nation's eastern trout rivers were polluted or experienced elevated water temperatures, reducing the range of native brook trout. Smallmouth bass were often introduced to northern rivers with increased water temperatures and slowly became a popular gamefish with many anglers. Equally adaptable to large, cool-water impoundments and reservoirs, the smallmouth also spread far beyond its original native range. Later, smallmouth populations also began to decline after years of damage caused by overdevelopment and pollution, as well as a loss of river habitat caused by damming many formerly wild rivers to form lakes or reservoirs. In recent years, a renewed emphasis on preserving water quality and riparian habitat in the nation's rivers and lakes, together with stricter management practices, eventually benefited smallmouth populations and has caused a resurgence in their popularity with anglers. [5] [7]

Today, smallmouth bass are very popular game fish, frequently sought by anglers using conventional spinning and bait casting gear, as well as fly fishing tackle. [8] [9] The smallmouth bass is potentially the toughest fighting freshwater fish in North America, and is commonly the targeted species in many fresh water fishing tournaments. [10] In addition to wild populations, the smallmouth bass is stocked in cool rivers and lakes throughout Canada and the United States. In shallow streams, it is a wary fish, though usually not to the extent of most trout. The smallmouth is highly regarded for its topwater fighting ability when hooked – old fishing journals referred to the smallmouth bass as "ounce for ounce and pound for pound the gamest fish that swims". [11] Smallmouth bass are not usually taken for the table, but rather are caught and released by most anglers. However, smaller specimens in cooler water often have higher quality filets of white, firm flesh when cooked. [12]

The current all-tackle world record for a smallmouth bass is 11 lb 15 oz, caught by David Hayes [13] in the Dale Hollow Reservoir, on the Kentucky/Tennessee border, in 1955. [14]

In conventional fishing, smallmouth may be successfully caught on a wide range of natural and artificial baits or lures, including crankbaits, hair jigs, plastic jerkbaits, artificial worms, spinnerbaits, and all types of soft plastic lures, including curly tail grubs or tubes with lead head jigs. Spinning reels or baitcasting reels may be used, with line strengths of 6 to 15 pounds typically utilised. According to many, smallmouth typically put up a better, more exciting fight than any other black bass. Rods are usually of ultralight to medium-heavy action. They may also be caught with a fly rod using a dry or wet artificial fly, nymphs, streamers, or imitations of larger aquatic creatures, such as hellgrammites, crawfish, or leeches. Floating topwater popper fly patterns and buzz baits are also popular for smallmouth fishing. [8] [9] For river fishing, spinning tackle or fly tackle has been the most popular angling tools for smallmouth in North America for many years.