The first county seat was Calliope in 1860, then a small village with 15 inhabitants, and now part of Hawarden. The first courthouse was built here in 1860 and served as such until 1872. A larger immigration wave began in 1869, primarily of Dutch. In 1872, Orange City was declared the seat. In June 1902, the construction began on a new Sioux County courthouse designed by W.W. Beach. Of red sandstone, it was completed in 1904, and still serves as the courthouse. From 1976 until 1982 the building was completely restored, and in 1977, it was listed on the National Register of Historic Places. 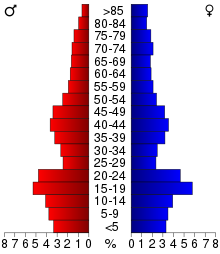 At one time divorce was relatively uncommon. In 1980, 52 married people in the county existed per divorced person; this rate did not exist in the total United States since the 1930s. [12] As of 2011 [update], this changed to 14 married persons per divorced person. [12]

Sioux County is the home to two four-year liberal arts colleges; Northwestern College in Orange City and Dordt College in Sioux Center. Both of these schools have enrollments over 1,000. Northwest Iowa Community College is also in Sioux County, though it is most often associated with the community of Sheldon in O'Brien County.

Sioux County is overwhelmingly Republican in Presidential elections. [13] The only Democratic Presidential nominee to ever carry Sioux County since the Civil War has been Franklin D. Roosevelt, who did so in 1932 and 1936; [14] however, Theodore Roosevelt won the county as a Progressive in 1912 and George B. McClellan carried the county in the wartime 1864 election. In 1992, Sioux County was one of only two counties in the nation, along with Jackson County, Kentucky, to give George H.W. Bush over seventy percent of its vote. [15] In the six elections since then, the Republican candidates has never received less than 75 percent of the county’s vote. [16] It is located in what was, until 2013, Iowa's 5th congressional district which had a Cook Partisan Voting Index of R+9 and was represented by Republican Steve King. King won the seat in Iowa's new 4th congressional district in the 2012 election [17] with 53% of the district's vote, with 83% of Sioux County votes going for King. [18]

The population ranking of the following table is based on the 2010 census of Sioux County. [20]