Shedd Aquarium was the first inland aquarium with a permanent saltwater fish collection. It is located on Lake Michigan, on the Museum Campus Chicago, along with the Adler Planetarium and the Field Museum of Natural History.

In 2015, the aquarium had 2.02 million visitors. It was the most visited aquarium in the U.S. in 2005, and in 2007, it surpassed the Field Museum as the most popular cultural attraction in Chicago. [9] The aquarium contains 1,500 species, including fish, marine mammals, birds, snakes, amphibians, and insects. [10] The aquarium received awards for "best exhibit" from the Association of Zoos and Aquariums (AZA) for Seahorse Symphony in 1999, Amazon Rising in 2001, and Wild Reef in 2004. It was designated a National Historic Landmark in 1987. 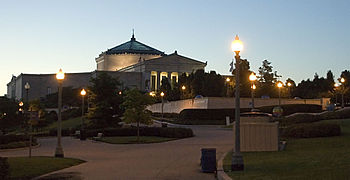 Shedd Aquarium was the gift of retail leader John G. Shedd, a protégé of Marshall Field (benefactor of the adjacent Field Museum), to the city of Chicago. Although Shedd only lived long enough to see the architect's first drawings for the aquarium, his widow, Mary R. Shedd, cut the ribbon at the official opening ceremony.

The aquarium cost $3 million to build, and initially included 132 exhibit tanks . [11] Groundbreaking took place on November 2, 1927, and construction was completed on December 19, 1929; the first exhibits opened on May 30, 1930. As one of the first inland aquariums in the world, the Shedd had to rely on a custom-made railroad car, the Nautilus, for the transport of fish and seawater. The Nautilus lasted until 1959.

In 1930, 20 railroad tank cars made eight round trips between Key West and Chicago to transport 1,000,000 US gallons (3,800,000 l) of seawater for the Shedd's saltwater exhibits. In 1933, Chicago hosted its second world's fair, the Century of Progress. The Aquarium was located immediately north of the fairgrounds, and the museum gained exposure to a large international crowd.

In 1971, Shedd Aquarium added one of its most popular exhibits, a 90,000-US-gallon (340,000 l) exhibit reproducing a Caribbean coral reef. That same year, the aquarium acquired its first research vessel, a 75-foot (23 m) boat for exploring the Caribbean, manned by a crew to conduct field research and collect specimens. In 1985, this boat was replaced with the aquarium's current vessel, the Coral Reef II. John G Shedd made the Shedd Aquarium to make sure that Chicago had an aquarium like other citys. In 1987, Shedd Aquarium was placed on the National Register of Historic Places.

Chicago skyline at sunrise, viewed from the east; the Shedd is at left

There are several permanent exhibits at Shedd: Waters of the World, Caribbean Reef, Amazon Rising, Wild Reef, and the Abbott Oceanarium.

Waters of the World

The Caribbean Reef exhibit was built in 1971, on the site of the aquarium's very first exhibit, the Tropical Pool. A feature of this exhibit is a diver that interacts with the animals while talking with the people. A part of the exhibit is a 90,000-US-gallon (340,000 l) circular tank that allows for maximum walk-around viewing. It was one of the first habitats to display schooling fish. It is also home to the rescued green sea turtle, Nickel, as well as bonnethead sharks, Tarpons, stingrays, and many more. The exhibit is near the center of the first floor. It is adjacent to Amazon Rising, Waters of the World, and Wild Reef.

The Amazon Rising exhibit is a 8,600-square-foot (800 m2) walkthrough flooded forest recreation of the Amazon River and the surrounding jungle. This exhibit contains 250 different species, and its highest water level is 6 feet (1.8 m). Species from this area on exhibit include anacondas, piranhas, spiders, freshwater stingrays and caimans.

The wild reef exhibited at the Shedd Aquarium.

In 2003 Shedd opened Wild Reef, a permanent exhibit located two levels below the main building. The exhibit contains a total of 525,000 US gallons (1,990,000 l) and recreates a Philippine coral reef on the Apo Island marine reserve, complete with living coral, multiple species of fish and rays, and a collection of sharks such as sandbar, sawfish, zebra, and blacktip reef sharks. The main draw of this attraction is a 400,000-US-gallon (1,500,000 l) shark tank with 12-foot (3.7 m) high curved windows, allowing visitors a diver's-eye view. The Wild Reef exhibit also features a saltwater tank display area where coral is propagated and grown for conservation purposes. [15]

Opened on May 17, 2013, this exhibit allows guests to touch cownose rays and yellow spotted rays as they swim around their 20,000 US gallons (76,000 l) outdoor exhibit. Located on the aquarium's South Terrace, this exhibit is open seasonally from May through October (weather permitting). 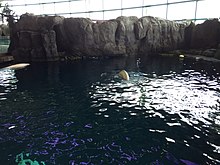 Belugas swimming in the Abbott Oceanarium

In 1991, Shedd Aquarium opened the Oceanarium (known since 2010 as the Abbott Oceanarium), a large addition to the aquarium that features marine mammals, including Pacific white-sided dolphins, beluga whales, sea otters and California sea lions, as well as penguins, that are located in the Polar Play Zone. The Polar Play Zone is an interactive play area for children as well as the home to the Magellanic and Rockhopper penguins. The lower level of the Oceanarium allows underwater viewing of the beluga whales and the dolphins. It holds 3,000,000 US gallons (11,000,000 l) in total; the largest single tank is the 2,000,000-US-gallon (7,600,000 l) "Whale Harbour". [16] The Oceanarium is the largest indoor marine mammal facility in the world. [17] Several of the sea otters that lived in the aquarium in the past were rescued from the Exxon Valdez oil spill in 1989. [16] In the fall of 2008, Shedd's Oceanarium was closed for preventive sealing as well as administrative upgrades. The animals in the exhibit area were temporarily moved to other zoos and aquariums until the exhibit reopened in May 2009.

One World aquatic presentation replaced Fantasea in 2013. The show can feature belugas, dolphins, penguins, sea lions, a hawk, and dogs. A holiday version is sometimes shown in November and December.

This exhibit opened in 2011, focusing on jellyfish, and the misconceptions surrounding them. It featured at least 10 species of jellyfish, including Moon jellyfish, Ctenophora (Comb jellyfish), Black sea nettle, Atlantic sea nettle, Jelly blubber and Flower hat jelly. The exhibit closed in 2015. [18]

Animals on exhibit, past and present

Walter Chute, the aquarium's director from 1928 to 1964, wanted rare fish to attract the 10 million tourists expected to visit Chicago for the exposition in 1933. Granddad, an Australian lungfish, arrived at the Shedd in 1933, along with his mate, from Sydney during the Century of Progress world exposition. During the expo's run, they attracted about 4.5 million visitors. [22]

At Granddad's death in 2017, he was claimed by the aquarium to be the oldest fish in any aquarium in the world. [22] He was at least 86 and possibly older; he weighed 25 pounds (11 kg) and is 4 feet (1.2 m) in length. His normal behavior was to lay like a sunken log on the bottom of his habitat.

In 2000, Mauyak gave birth to Qannik, who was sent to Point Defiance Zoo in Tacoma where he died in 2009. In 2006, the beluga whale Puiji gave birth to a female calf, later named Bella. On August 16, 2007 Mauyak gave birth yet again to a male calf named Miki, the Inuit word for ″small″ bringing the total number of successful beluga calf births at the aquarium to four since 1999. Miki has been moved to the Mystic Aquarium in 2016.

Kayavak, a young beluga whale, is one of the most famous residents of the Oceanarium. The whale became an orphan at only five months old after her mother, Immiayuk, died. Trainers fed Kayavak fish, cared for her day and night, taught her how to "be a whale," and she thrived to be the healthy adult she is today.

Puiji, another of Shedd Aquarium's beluga whales, gave birth to a 162-pound, five-foot, four-inch male calf on December 14, 2009. [23] Although it was a difficult birth, the calf survived and debuted to the public on Sunday, January 24, 2010. [24] [25] He has since been named "Nunavik" meaning "friendly, beautiful, and wild". Nunavik currently lives at the Georgia Aquarium as of 2016.

Naluark was transferred to Mystic Aquarium & Institute for Exploration in Mystic, Connecticut in October 2011. He has since been moved to SeaWorld Orlando in 2016.

Another female beluga, named Naya, gave birth on December 20 to a 162-pound, five-foot two-inch male calf, though the calf died two days later from complications during birth. [26] Puiji died on Wednesday, October 26, 2011 following a seizure after having been undergoing treatment for an undisclosed medical condition over the course of several months. [27]

Kenai ( Exxon Valdez oil spill survivor) was euthanized on October 9, 2012 due to failing health brought on by advancing years. [30]

Kachemak (oldest sea otter in a North American Aquarium/Zoo) was euthanized on August 24, 2013 due to failing health related to age. [31]

Sagu and Makoa were conceived by Li'i at the Miami Seaquarium when Piquet was on a breeding loan there. Piquet gave birth to Sagu on Memorial Day weekend in 2012. Piquet gave birth to her second calf, Makoa on June 1, 2015. On April 18, 2016, Katrl gave birth to a male calf sired by Li'i. The calf was placed on display on June 18, 2016, and was named Kukdlaa meaning "Bubbles" in the Tlingit language. Piquet was moved to Miami SeaQuarium in early 2018 for a breeding loan and Ipo was transferred to Shedd to take her place.

Nickel is a female green sea turtle who resides at the Caribbean Reef exhibit located in directly in front of the main lobby. Nickel was rescued on Florida's Gulf Coast area in 1998, where she was struck by the propellers of a motorboat. This accident damaged her shell and paralyzed her from the waist down causing her to have buoyancy problems. Researchers thought that she could no longer live in the wild so she was brought to Shedd in the spring of 2003. Upon her arrival, she went through several medical examinations, including an x-ray. The x-ray revealed a 1975 nickel lodged in her throat which is where she received the name, Nickel. Nickel is one of the many rescued animals that reside in the Shedd. She serves as an example to many people of the effects human activities can have on wildlife. [35]

Euthanized on October 29, 2013, due to age related health issues, Rio was 21 and lived well past the median life expectancy of a North American river otter. [36]

Deadeye, a female Atlantic tarpon, was the oldest fish to reside at the Caribbean Reef in the aquarium. She was first introduced to the aquarium in 1935 and died in 1998. [37][ self-published source]

In 2016, the Shedd Aquarium introduced for the first time American alligators (Alligator mississippiensis) to its permanent exhibit spaces. Eight juvenile alligators were added to the Islands and Lakes galleries. [38]

Shedd Aquarium is also notable for its architecture. The basic design, by architectural firm Graham, Anderson, Probst & White, [39] is taken from classical Greek architecture, more specifically Beaux Arts, to match the other structures of the Museum Campus. The central aquarium building is octagonal, fronted by Doric columns and a formal staircase and topped by a dome. Aquatic motifs are worked in at every opportunity; tortoise shells, dolphins, octopuses, waves, and even the Trident of Poseidon can be found all over the aquarium's exterior and interior. Improving upon its predecessor inland aquarium, the Belle Isle Aquarium in Detroit, extensive use was made of designs by Mary Chase Perry Stratton, incorporating her custom-made Pewabic Pottery tile. [40] The Oceanarium is done in a more modern style representing the Pacific Northwest, but one that blends with the older part of the building. "Whale Harbor", the Oceanarium's 2,000,000-US-gallon (7,600,000 l) main tank, is backed by a wall of windows that look out onto Lake Michigan.

The Daniel P. Haerther Center for Conservation and Research helps to provide on-site research at the aquarium. They study topics such as animal health and behavior, nutrition, animal training, reproduction and genetics.

Since 1991, the Shedd Aquarium has been involved with research focused on beluga whales. They focus on the animal handling procedures to ensure the animals’ welfare. The aquarium does most of their beluga whale research in Bristol Bay in southwest Alaska. [41]