From Wikipedia
https://en.wikipedia.org/wiki/Serbian_cuisine Jump to search
For other uses, see Serbian (disambiguation).

Historically, Serbian food is characterized by influences of Byzantine- Greek and Mediterranean, but also by Turkish, and, to a lesser extent, by Central Europe. [1] [2] Serbian law bans production and import of genetically modified foods (GMOs), a standard which has caused a long-running dispute with the World Trade Organization, preventing Serbia from choosing to become a member. [3] [4] 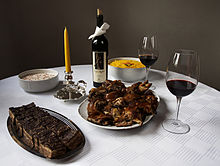 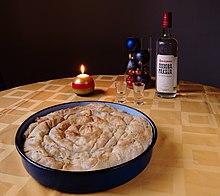 With Serbia being located on the crossroads between East and West, its cuisine has gathered elements from different cooking styles across the Middle East and Europe to develop its own hearty gastronomy with an intricate balance of rich meats, vegetables, breads, cheese, fresh pastries, and desserts. It has much in common with the cuisines of neighboring Balkan countries; its flavors are mild, fresh, and natural. Seasonings are usually salt, black pepper, and paprika, while ingredients are known for being fresh and high-quality. Seasonal food is an important element of Serbian cuisine, thus many dishes are strongly associated with a specific time of the year.

The average Serbian eats three meals a day: breakfast, lunch, and dinner—with lunch being the largest. [5] [6] However, traditionally, only lunch and dinner existed, with breakfast being introduced in the second half of the 19th century. [6] [7]

A number of foods which are usually bought in the West are often made at home in Serbia. These include rakija, slatko, jam, jelly, and various pickled foods—notably sauerkraut, ajvar, or sausages. The reasons for this range from economical to cultural. Food preparation is a strong part of the Serbian family tradition.

William, archbishop of Tyre, who visited Constantinople in 1179, described the Serbs:

They are rich in herds and flocks and unusually well supplied with milk, cheese, butter, meat, honey, and wax". [8]

The first published cookbook in Serbia is The Big Serbian Cookbook (Велики српски кувар), written by Katarina Popović-Midzina in 1877. [9]

The best known Serbian cookbook is Pata's Cookbook (Патин кувар), written by Spasenija Pata Marković in 1907; the book remains in publication even today. [10]

An old Serbian legend says that during the time of the 14th-century Serbian Empire, under the rule of Stefan Uroš IV Dušan, meals in the Serbian palace were eaten with golden spoons and forks. Historians say that medieval Serbian cuisine mainly consisted of milk, dairy, produce, and vegetables. Not a lot of bread was eaten, but when it was, the rich ate bread made from wheat and the poor ate bread made from oats and rye. The only meat consumed was wild game, with cattle reserved for agricultural use. [11]

Breakfast in Serbia is an early but hearty meal, rich in calories and carbohydrates, meant to provide one with an abundance of energy to start the day. Bread is frequently served with butter, jam, yogurt, sour cream, or cheese, accompanied by bacon, sausage, salami, eggs, or kajmak. Serbians often stop by a bakery in the morning for fresh pastries such as pogačice, paštete, kifle (which in Serbian usage may or may not be crescent-shaped, and may be sweet, but may also be sprinkled with salt crystals), kiflice, perece, buhtle, pletenice, štapići, zemičke, djevreci, mekike, and uštipci. Other common breakfast dishes include burek, kačamak, and cicvara (types of polenta) and popara, proja (cornbread), and čalabrca. Before breakfast most people usually have a cup of Turkish coffee, or espresso, and with the breakfast itself either tea, milk, milk coffee, or chocolate milk is served.

Meze is an assortment of small dishes and appetizers, though, unlike the Middle Eastern meze, it does not usually include cooked dishes, and is therefore more similar to Italian antipasto. A Serbian meze typically includes slices of cured meats and sausages, cheeses, olives, fresh vegetables, and zimnica. Meze is served either to accompany alcoholic drinks or as a starter before a soup on bigger meals.

Soups are eaten as an entrée at almost every lunch. They are considered to be very important for good health. There are two types of soups in Serbian cuisine: thin soups called supa, and thicker soups with roux or eggs called čorba. The most common ones are simple pottages made of beef or poultry with added noodles. Lamb, veal, and fish soups are considered delicacies.

The main course is most commonly a meat dish. Besides roštilj (barbecue) which is very popular, braising, stewing, and roasting in an oven are the most common cooking methods.

Grilling is very popular in Serbia. Grilled meats are the primary main course dishes offered in restaurants. They are commonly served as mixed grill on large oval plates. They are often also eaten as fast food. The cities of Leskovac and Novi Pazar are especially famous for their barbecue.

Bread is a staple of Serbian meals, and it is often treated almost ritually. A traditional Serbian welcoming is to offer the guest with bread and salt; bread also plays an important role in religious rituals. Many Serbians believe that it is sinful to throw away bread regardless of how old it is. Although pasta, rice, potato, and similar side dishes did enter the everyday cuisine over time, many Serbs still eat bread with meals.

In Serbia, salads are eaten as a side dish with the main course. The simplest of salads consist of sliced lettuce, cabbage, tomato, cucumber or carrot, olives with oil, vinegar, salt, and spices.

Dairy products are an important part of the Serbian diet. Fermented products such as sour milk, kajmak, yogurt and pavlaka are common breakfast foods, consumed daily. White cheeses, called sir are much more common in Serbia than yellow cheeses. There are numerous varieties, some of which have been awarded for their quality, such as the white cheese with walnuts from Babine, which won the 2012 "best autochtonic cheese" award. [12] Serbian Pule cheese, made from donkey milk, is the most expensive cheese in the world. [13] Although less common, several yellow cheese are locally produced.

Traditional Serbian meat products are simple ham, bacon, dry ribs, and a kind of pork rinds called čvarci. [6] They are usually produced every autumn or in early winter, during an event called svinjokolj, where pigs are slaughtered and meat is preserved for the winter. Cured meats, bacon, salo, čvarci, sausages such as krvavica, and kulen are produced. Offal and cheaper cuts of meat are utilized as well, and made into processed products such as švargla.

Various kinds of sausages and similar more complex meat products were created under Austrian influence in Vojvodina. [6] They include:

Pies are very popular in Serbia. They are eaten either for breakfast, dinner, or as a snack. They are most commonly made with thin layers of phyllo dough. There are several methods of preparation and numerous types of fillings, both sweet and savory. Serbian pies are usually named after either the preparation method or the filling.

One variety of pie that is not made with phyllo is the štrudla, which, in turn, isn't similar to strudel, but rather to a nut roll.

Sweets are served at the end of meals. Sweets and desserts enjoyed in Serbia typically include both Middle Eastern and European ones, as well as some authentically Serbian ones. Besides the ones mentioned here, pies with sweet fruit fillings are also common.

Domestic coffee (or Serbian coffee) is the most commonly consumed non-alcoholic beverage in Serbia. It is mostly prepared at home, rather than bought in coffee shops, and preferably consumed in the company of friends or family. Slatko, ratluk, and raki may be served alongside coffee. The majority of the Serbian population starts a day with a cup of coffee in the morning. Herbal teas are consumed as a medication, rather than a beverage. Yogurt and kefir are commonly consumed dairy beverages. They frequently accompany savory pastries. A beverage made from maize, called boza or kvas, was once popular, but today is rarely consumed.

A number of fruit juice and mineral water brands are produced locally. The Knjaz Milos mineral water is considered a national brand. 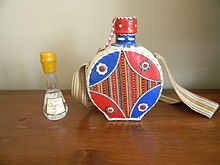 Raki in special bottle, as the national drink of Serbia

Rakija/ Raki is a general term for distilled beverages made from fruits. There are numerous varieties, which are usually named after the type of fruit they are made from. Comparatively many people brew their own rakija. Loza, made from grapes, is considered the national drink.

Beer has become recently popular and is enjoyed in Serbia, event outpacing the traditional raki and wine. The largest brewery in the country is Apatinska pivara.

There are nearly 110,000 hectares of vineyards in Serbia, producing about 645,000 tons of grapes annually, with South Serbia producing the most. Because of that, Serbia is internationally recognized as a great wine producer.