Table of Contents ⇨
Not to be confused with Searcy, Arkansas.
U.S. county in Arkansas

Searcy County is a county located in the U.S. state of Arkansas. As of the 2010 census, the population was 8,195. [1] The county seat is Marshall. [2] The county was formed December 13, 1838, from a portion of Marion County and named for Richard Searcy, the first clerk and judge in the Arkansas Territory. The city of Searcy, Arkansas, some seventy miles away, shares the name despite having never been part of Searcy County. The county is an alcohol prohibition or dry county.

Chocolate Roll Capital of the World 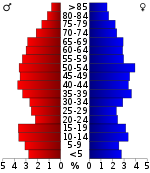 Along with adjacent Newton County, Searcy is unique among Arkansas counties in being traditionally Republican in political leanings even during the overwhelmingly Democratic " Solid South" era. This Republicanism resulted from their historical paucity of slaves, in turn created by infertile soils unsuitable for intensive cotton farming, and produced support for the Union during the Civil War.[ citation needed] These were the only two counties in Arkansas to be won by Alf Landon in 1936, [15] Wendell Willkie in 1940, Charles Evans Hughes in 1916, and even Calvin Coolidge in 1924. In Presidential elections post- 1932, Harry S. Truman and Jimmy Carter are the only Democrats to carry the county. [16] In the 1992 election George H. W. Bush won his second-highest margin in the state, and the Republican nominee has received over 60 percent in Presidential elections from 2000 to 2012 inclusive. [17] In 2016, Searcy County voted over 79 percent for Donald Trump, while former Arkansas First Lady Hillary Clinton received just 16 percent.

The county is in Arkansas's 1st congressional district, which from Reconstruction until 2010 sent only Democrats to the U.S. House. That year, it elected Republican Rick Crawford, who currently holds the seat as of 2014. In the Arkansas House of Representatives Searcy County is represented by second-term Republican David Branscum from the 83rd (and formerly the 90th prior to 2013) district. [19] The state senator, Missy Thomas Irvin, is also a Republican, serving her second term from the 18th district. [20]

Since 1980, in gubernatorial races, the county has tended to favor Republicans in all but one contest. It voted for Frank White in his successful run against freshman Democrat incumbent Bill Clinton in 1980. It supported White again in 1982 and 1986 in rematches with Clinton. It also voted for Woody Freeman over Clinton in 1984. It was the only county in Arkansas where Republican Sheffield Nelson won in both 1990 and 1994. [21] In 1990, it was Nelson's best county in the entire state, winning 64 percent to then-Governor Bill Clinton's 36 percent in Searcy County. In 1994, Searcy County was among the two counties to vote for Nelson over incumbent Democrat Jim Guy Tucker, Benton County being the other (which actually voted for Clinton over Nelson in 1990).

In 1998, Searcy County voted for Republican Mike Huckabee with just under 70 percent, and again in 2002, albeit with a reduced margin of 57 percent. In 2006, it voted 52 percent for Republican ex-Congressman Asa Hutchinson, who lost to Democrat Mike Beebe. In 2010, however, it did vote for incumbent Democrat Mike Beebe with a margin of 57 percent to 40 percent over former state Senator Jim Keet, the first time it had done so since 1978. Keet was regarded as a weak candidate, as he failed to carry a single county.

Public education is provided for early childhood, elementary and secondary education from multiple school districts including: 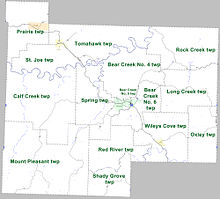 Townships in Searcy County, Arkansas as of 2010

Townships in Arkansas are the divisions of a county. Each township includes unincorporated areas; some may have incorporated cities or towns within part of their boundaries. Arkansas townships have limited purposes in modern times. However, the United States Census does list Arkansas population based on townships (sometimes referred to as "county subdivisions" or "minor civil divisions"). Townships are also of value for historical purposes in terms of genealogical research. Each town or city is within one or more townships in an Arkansas county based on census maps and publications. The townships of Searcy County are listed below; listed in parentheses are the cities, towns, and/or census-designated places that are fully or partially inside the township. [22] [23]