Scott Randall Tipton (born November 9, 1956) is the U.S. Representative for Colorado's 3rd congressional district. In November 2010, he defeated three-term Democratic incumbent John Salazar, to whom he lost by a wide margin in 2006. A Republican, he was previously a member of the Colorado House of Representatives.

He used to be a co-owner of a pottery company in Cortez, Colorado.

A lifelong Republican, he became involved in the unsuccessful Reagan presidential campaign of 1976 and was a delegate to the Republican Convention that year. He also assisted with local campaigns for Reagan in 1980 and 1984 across Montezuma County, Colorado and the 3rd Congressional district and was Republican chairman of the 3rd Congressional district for eight years. He was a board member of Mesa Verde National Park, Crow Canyon Archaeological Center, and the advisory board of Pueblo Community College.[ citation needed]

On February 5, 2008, he announced his candidacy for the Colorado House seat representing District 58. The announcement came shortly after the incumbent, Ray Rose, announced he would retire in 2008. He had no opposition in the Republican primary, [2] but faced Democratic candidate Noelle Hagan in the November 2008 general election. Hagan's candidacy was endorsed by the Denver Post [3] and the Montrose Daily Press. [4] Tipton won the election with 59 percent of the vote. [5]

With Representatives Laura Bradford and Frank McNulty, Tipton planned on re-introducing a version of Jessica's Law to establish minimum sentences for child sex offenders, [6] sponsoring bills to create a full-time judge position in Montrose [7] [8] and to simplify water rights filing. [9] The attempt to introduce a version of Jessica's Law was unsuccessful, it dying in committee. [10]

For the 2009 legislative session, Tipton was named to seats on the House Agriculture, Livestock, and Natural Resources Committee and the House Local Government Committee. [11] 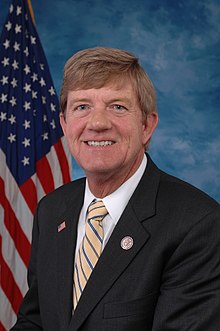 In the Republican primary, he defeated Bob McConnell 56% to 44%. [13] He again challenged Salazar in Colorado's 3rd congressional district. Libertarian Gregory Gilman and independent Jake Segrest were also on the ballot, with independents John W. Hargis, Sr. and James Fritz qualified as write-in candidates. He decided to retire from the Colorado House of Representatives to run for Congress in 2010, again challenging Salazar. [14] In the general election, he defeated Salazar 50.10% to 45.76%.

In 2012, he was challenged by Sal Pace, a Democratic state representative from Pueblo. His re-election campaign was aided by $1.3 million in advertising against Pace, funded by the Grover Norquist led, Americans for Tax Reform. [15] SG Interests, an oil and gas company from Texas, that sought to drill in the Thompson Divide area, also campaigned against Pace. [16]

In 2014, he was challenged by Democrat Abel Tapia, Libertarian Travis Mero and UNA candidate Tisha Cadia. He won with 56.14% of the vote. [17]

Tipton voted in favor of the Tax Cuts and Jobs Act of 2017. [18] According to Tipton, the bill fixes a "broken tax code" and "puts the needs of the American people before special interests." [19] Tipton touts that the act "supports families, graduate students, homeowners, and small businesses," and is "a victory for Coloradans and all Americans." [20]

Tipton expressed support for then-candidate Donald Trump in March 2016. [23] After the Donald Trump Access Hollywood tape was released, in which Trump and Billy Bush had a lewd exchange about women, Tipton did not rescind his endorsement. [24]

Tipton has said, "we have a problem with reckless spending across the board at the federal level." [25] He has signed Grover Norquist's Taxpayer Protection Pledge, [26] and a pledge sponsored by Americans for Prosperity promising to vote against any Global Warming legislation that would raise taxes. [27] He has also supported the Ryan Plan, having twice voted for it. [28]

In February 2017, he voted against a resolution that would have directed the House to request 10 years of Trump's tax returns, which would then have been reviewed by the House Ways and Means Committee in a closed session. [29]

Tipton rejects the scientific consensus on climate change. [30] He argues that climate change is driven by natural climate cycles. [30] He opposes the Paris Agreement, the international agreement which mitigates greenhouse gas emissions. [25]

He opposes federal regulation of greenhouse gas emissions. [31] He has an 8% score by the League of Conservation Voters. [32]

In 2016, Tipton wrote a draft bill on oil and gas drilling in the Thompson Divide that contained large sections taken "word for word" from a proposal offered by a SG Interests, a Texas-based energy company and its lobbying firm. Tipton's draft legislation (which he described as a "starting point") was criticized because of Tipton's receipt of $39,000 in campaign contributions from SG Interests over the course of his career. [34]

In January 2017, Tipton voted in favor of legislation that would make it easier to sell federal public lands. Tipton came under criticism from conservation groups for his vote. [35]

Tipton introduced the Water Rights Protection Act into the House on September 26, 2013. The bill would prevent federal agencies from requiring certain entities to relinquish their water rights to the United States in order to use public lands. [36] Tipton said the bill was needed because it "provides critical protection for water rights' holders from federal takings by ensuring that federal government agencies cannot extort private property rights through uneven-handed negotiations." [37] Tipton argued that the bill "prohibits federal agencies from pilfering water rights through the use of permits, leases, and other land management arrangements, for which it would otherwise have to pay just compensation under the 5th Amendment of the Constitution." [37]

He opposes same-sex marriage. [31] He has voted in favor of provisions which would allow federal contractors to discriminate against people based on their sexual orientation. [40][ unreliable source?]

Tipton has said, "I strongly oppose amnesty or any special benefits for illegal immigrants". [41] He criticized President Obama for his executive order allowing up to five million illegal immigrants "to come out of the shadows" and work openly in the country. [41]

Tipton takes a "hardline stance" on the refugees of the Syrian Civil War and opposes the admission of Syrian refugees to the United States. [42] He has clashed with Governor John Hickenlooper about the resettlement of refugee families in Colorado. [42]

In 2011, it was reported that he spent over $7,000 on vendors that did business with his nephew's company. [43] Also in 2011, Tipton wrote an apology letter to the House Ethics Committee after it became known that his daughter was using his name in an effort to secure government contracts from other Congressional offices. In 2012, he violated House rules when his office mistakenly used taxpayer resources to promote a campaign event. [44]