Table of Contents ⇨
Westernmost and largest of the Barlavento islands of Cape Verde
For other uses, see Santo Antão (disambiguation). 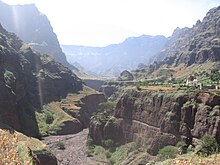 Santo Antão is 42.75 km long (east-west) and 23.97 km wide (north-south). [1]:25 The island is of volcanic origin and very mountainous, characterized by two high plateaus and several steep river valleys. The southern part of the island has a desert climate, while the northeast and the higher elevations are semi-arid.

The main rivers of Santo Antão are:

Santo Antão island has a hot desert climate ( Köppen climate classification: BWh) in Sinagoga and Porto Novo and a cold semi-arid climate ( Köppen climate classification: BSk) in Espongeiro. The island features very balanced temperatures year round higher on the slopes (~ 800 metres ASL) to cool highland subtropical steppe climate BskL above 1,000 metres ASL. The average annual temperature on the coast is about 23 °C (73 °F), decreasing to some 11 to 15 °C (52–59 °F) on the highest grounds. There can be remarkably cool weather in the interior with warmer wet season starting in July and ending in December–January with colder dry season starting in December–January and ending in June. The major climate risk, similarly to other Cape Verdean islands, yet much less pronounced in the higher altitudes due to better ability in gaining moisture from clouds, is drought.

The island was discovered in 1461 or 1462 by Diogo Afonso, together with the islands of São Vicente and São Nicolau. [4]:73 Settlement of the island started in the first half of the 16th century. The main settlement was Ribeira Grande. Other settlements such as Ponta do Sol, Pombas and Porto Novo developed in the 19th century.

Fishing and agriculture are the main industries on the island.

The island's agriculture products include sugar cane, yams, cassava, bananas, mangoes, and grain. The main product on the island is a kind of rum known as grogue. Mills continue to distill grogue in the Paul Valley.

Due to its mountainous nature, most of the island's plantations are done in terraces, obviating the use of machinery and requiring immense manual labor. Recently, some experiences using drip irrigation have been taking place in order to mitigate the drought conditions.

The exportation of many of the island's agriculture products to other islands has been prohibited for nearly two decades because of the millipede ( Spinotarsus caboverdus) blight, but the quarantine was lifted in 2008. [11]

Tourism is becoming one of the most dominant industries on the island. There has been some investment in Rural tourism infrastructures. Hiking, Trekking and Cultural tourism account for most of the touristic offer of this island.

The island is divided in three municipalities, which are subdivided into civil parishes:

Santo Antão has 50 endangered species of flora which has the most number in the nation. Several flora found in the island that are also found in some parts of the archipelago includes Aeonium gorgoneum, Artemisia gorgonum, Campanula jacobaea, the Conyza species of feae, pannosa and varia, Echium stenosiphon, Kickxia webbiana, Lavandula rotundifolia, Limonium braunii, Micromeria forbesii, Sonchus daltonii, Capeverdean navelwort ( Umbilicus schmidtii) and Verbascum capitis-viridis. Flora found only in the island include Tornabenea insularis and ribeirensis.

Other than Portuguese (official language), the majority of the population speaks Cape Verdean Creole.[ citation needed]