Sam Boyd Stadium is a football stadium in Whitney, Nevada, United States, an unincorporated community in the Las Vegas Valley. It honors Sam Boyd (1910–1993), a major figure in the hotel and casino industry in Las Vegas. [4] The stadium consists of an uncovered horseshoe-shaped single-decked bowl, with temporary seating occasionally erected in the open north end zone. The field has a conventional north-south orientation and is at an elevation of 1,600 feet (490 m) above sea level.

The stadium was the home of the UNLV Rebels football team from the University of Nevada, Las Vegas from 1971 until 2019, and the annual Las Vegas Bowl in December from 1992 until 2019. It was also used for high school football championship games and at times regular-season high school games for Bishop Gorman High School. A long time stop on the AMA Supercross Championship beginning in 1990, the final race of the season was located at the stadium every year until the upcoming 2020 season when the stadium was moved to the second to last race. From 2010 to 2019, it hosted the USA Sevens leg of the annual World Rugby Sevens Series in the sevens version of rugby union. [5]

In 2011, UNLV began exploring building a new stadium to replace Sam Boyd Stadium. [8] In 2017, it was announced that the Oakland Raiders would move to Las Vegas and a new stadium, Allegiant Stadium began construction. The UNLV Rebels will join the Raiders at the new stadium in 2020. [9]

In 2016, Oakland Raiders owner Mark Davis physically toured the stadium to assess the stadium as a possible temporary home if the team moved to Las Vegas. [10] [11] It was suggested that Sam Boyd Stadium could have served as a temporary home for the Raiders should fan support in Oakland fall to levels that could not reasonably be accommodated at the facility (the Los Angeles Chargers came to a similar arrangement and played at the StubHub Center, a stadium that is even smaller than Sam Boyd Stadium, while in the 1990s the Tennessee Oilers came to a similar arrangement in Memphis with Liberty Bowl Memorial Stadium and Nashville with Vanderbilt Stadium after they left an apathetic Houston market before their new stadium was ready). A fall in fan support in Oakland never occurred and the Raiders later signed a stadium lease for 2018 and after looking at their options a 2019 lease with a 2020 option in Oakland rendering Sam Boyd Stadium not needed by the team. [12] Furthermore, the stadium required renovations in order for it to be sufficient to serve as a temporary home and with the stadium to be abandoned when construction of Allegiant Stadium is completed, the Raiders found that financially impractical and they stayed in Oakland. [13]

The last event at Sam Boyd Stadium is scheduled to be a Monster Energy Supercross race on April 25, 2020. UNLV’s contract with Allegiant Stadium prohibits any events from taking place at the stadium after June 30, 2020, leaving the stadium dormant after that date. The exact future of the stadium remains up in the air, as UNLV officials are considering selling it or demolishing it. [15] 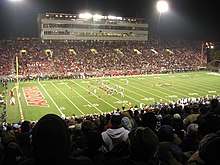 From 1992, until 2019 the stadium was the site of the annual Las Vegas Bowl. [16] In the later years of the bowl game at the stadium, the game was very well attended. In 2005, Brigham Young University made its first postseason appearance since 2001 and excited BYU fans over-filled the stadium; the announced attendance was a record 40,053. The following season, BYU returned to the Las Vegas Bowl as a nationally ranked team. Additional seating was arranged at Sam Boyd Stadium for the 2006 game; the resulting attendance of 44,615 was the largest crowd to watch a team sports event in the history of the state of Nevada. In 2007, BYU made its third straight appearance and attendance was 40,712. BYU made its fourth straight appearance 2008, ranked #16 in the nation and faced off against the Arizona Wildcats who made their first bowl appearance since 1998. Arizona won the contest, 31–21; 40,047 attended the game which featured David Hasselhoff singing the national anthem. [17] [18]

The stadium hosted the Las Vegas Posse of the Canadian Football League in 1994, the Las Vegas Outlaws of the original XFL in 2001 and the Las Vegas Locomotives of the United Football League from 2009 to 2011. On November 27, 2009, the Locomotives played the Florida Tuskers in the 2009 UFL Championship Game at Boyd, which the Locos won 20-17 in overtime. [21] Sam Boyd Stadium was originally announced as the host for the 2019 and 2020 Alliance of American Football championship games, [22] but the former was moved to Ford Center at The Star in Frisco, Texas and the league later folded halfway through its 2019 season. [23]

Following the 1976 season of the North American Soccer League, the San Diego Jaws decided to relocate and become the Las Vegas Quicksilvers. Despite a roster featuring international superstar Eusébio, the Quicksilvers could only manage an 11–15 record and a 5th-place finish in their division. They averaged an attendance of 7,092 per game. When the 1977 season ended, the franchise opted to move back to San Diego after only one year and became the San Diego Sockers. They were followed by the Las Vegas Seagulls, who played in the American Soccer League. They compiled a record of 7–18–3 in their only season in 1979. [24]

In 1999, the stadium hosted the CONCACAF Champions Cup tournament, which determined the continental champion of North and Central America. The stadium also hosted several Major League Soccer preseason exhibition matches. [25] Spanish superclub Real Madrid defeated Mexico's Santos Laguna 2–1 in a friendly match played on a temporary grass pitch in Sam Boyd Stadium in 2012. The paid attendance was 29,152, which made it the highest attended soccer match in Nevada history. [26]

The stadium had hosted the USA Sevens rugby tournament every year from 2010 to 2019. The USA Sevens was the largest rugby tournament in North America, drawing over 64,000 fans in 2012. The tournament brought together 16 national teams from all six continents in rugby sevens as part of the World Rugby Sevens Series. The USA Sevens debuted in 2004 in Los Angeles and moved to San Diego in 2007. [5] A temporary grass pitch was installed for the event each year through 2015. [28] The March 2016 event was played on the artificial surface.

In 2010, Sam Boyd Stadium became the host of the Clark County High School Football Coaches Hall of Fame, including a 22 feet by 12 feet wall wrap with vintage photos of the inductees that will be displayed in the Southwest concourse of the stadium. [29]

From 1990 until 2019, the final round of the AMA Supercross Championship was held at the venue. [30] The final race at the stadium in 2020 will be the second to final round. Most of the track is located inside the stadium with extensions taken into the area behind the score board. This event also includes the Davey Coombs Sr. East/West Shootout which was first won by Kevin Windham in 1997. From 2011 until 2019, the Monster Energy Cup was held at the venue. [31] Ryan Villopoto won the inaugural 2011 event as did Marvin Musquin in the 2017 event and Eli Tomac in 2018 event. [32] Adam Cianciarulo won the final event at the stadium in 2019. [33]

From 2000 to 2018, Sam Boyd Stadium hosted the Monster Jam World Finals in late March every year; the annual event has changed to rotating venues each year.