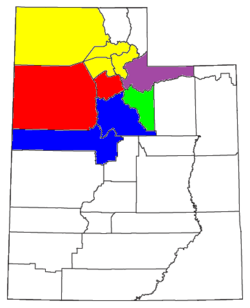 The Salt Lake City– Provo– Orem Combined Statistical Area is made up of ten counties [1] in northern Utah. The statistical area includes three metropolitan areas and two micropolitan areas. As of the 2014 estimate, the CSA had a population of 2,423,912 [2]—over 82 percent of Utah's population.