The Salt Lake Bees are a Minor League Baseball team of the Pacific Coast League (PCL) and the Triple-A affiliate of the Los Angeles Angels. They are located in Salt Lake City, Utah, and play their home games at Smith's Ballpark. Known to fans as the Apiary, the ballpark opened in 1994 and has a seating capacity of 15,411, the largest in the PCL. The team was previously known as the Salt Lake Buzz (1994–2000) and Salt Lake Stingers (2001–2005) before adopting their Bees moniker in 2006.

After the 1914 Pacific Coast League season, Salt Lake City businessman Bill "Hardpan" Lane purchased the Sacramento Solons and brought the team to Utah as the Salt Lake City Bees. Though a charter member of the PCL, the Solons suffered on the field and at the gate, being exiled at times to Tacoma, Fresno, and San Francisco. On March 31, 1915, their first game was played with 10,000 fans pouring into Bonneville Park to cheer the Bees to a 9–3 win over the Vernon Tigers.

The original Bees never won a PCL pennant, but they did draw attendees well, especially considering the small market size. Other PCL team owners, though, resented the high cost of travel to Salt Lake City. When the Vernon Tigers abandoned Los Angeles after the 1925 season, it was suggested to Lane that he would do well to transfer his team to southern California. So after eleven seasons, the Bees moved to Los Angeles for the 1926 season. At first known as the Hollywood Bees, the team soon became the Hollywood Stars. After ten seasons in Hollywood, the team transferred again, to San Diego, where it played as the San Diego Padres from 1936 to 1968. Salt Lake City was without a baseball team until 1946 when it received a franchise in the Pioneer League. [4]

When the Brooklyn Dodgers moved to Los Angeles in 1958, the second version of the Hollywood Stars was forced to relocate and were sold and moved back to Salt Lake City, becoming the Salt Lake City Bees. In 1959, the Bees won their first PCL pennant, edging the Vancouver Mounties by ​1 1⁄2 games. In 1963, the team began its first season as a farm team, becoming a full affiliate of the Chicago Cubs. This second version of the Bees played in the PCL from 1958 to 1965 before moving to Tacoma. As before, the void created by the loss of the PCL was filled by the Pioneer League from 1967 to 1969.

In 1970, the Pacific Coast League returned to Salt Lake City for the third time in the form of the new Salt Lake City Bees, the Triple-A farm team for the San Diego Padres. The affiliation lasted only one season, and in 1971, the Padres and California Angels swapped their Triple-A affiliates in Salt Lake City and Hawaii (where they had a short, but historic run of PCL dominance). Rather than continue as the Bees, the team took their parent's name of Angels and won the PCL title in 1971. After four seasons as the Angels, the team was renamed the Salt Lake City Gulls in 1975. The Gulls became the Triple-A affiliate of the Seattle Mariners in 1982. Though the team never achieved a first-place finish, it won PCL pennants in 1971 and 1979, winning the playoffs both years.

Following the 1984 season, the team was sold and moved to Calgary, Alberta, and became the Calgary Cannons in 1985. Out of the PCL after 1984, Salt Lake City again fielded a team in the rookie-level Pioneer League, the Salt Lake City Trappers, from 1985 to 1992. [4] In 1987, the Trappers won 29 consecutive games to establish an all-time pro baseball record. Following a near decade-long absence, the PCL returned to Salt Lake City for a fourth time in 1994. 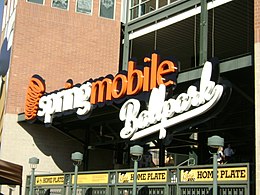 The current franchise dates from 1994, when Joe Buzas, a former major league player and the owner of the PCL Portland Beavers, moved the team to Salt Lake City. Buzas made a deal wherein the city would build a new ballpark on the site of historic Derks Field in exchange for relocating the team. The new ballpark, Franklin Quest Field, opened in 1994 with the renamed Salt Lake Buzz drawing 713,224 fans to home games during their inaugural season—breaking the PCL single-season attendance record that had stood for 48 years. [5] Buzas owned the team until his death in 2003. The team was purchased by Larry H. Miller, who also owned the NBA's Utah Jazz. Miller died in February 2009, and the team is currently owned by his widow, Gail Miller.

Known as the Salt Lake Buzz from 1994 to 2000, the team changed its name to the Salt Lake Stingers in 2001. The change was forced by a trademark dilution lawsuit filed by Georgia Tech, whose yellowjacket mascot is named Buzz. [6] The name change coincided with a change of major league clubs, from the Minnesota Twins to the Anaheim Angels.

Following the 2005 season, the team announced the Stingers would henceforth be known as the Salt Lake Bees, the name of the original PCL franchise which played in Salt Lake City from 1915 to 1926. [4] Bees have long been a symbol of Utah. The original name of the Mormon settlement, Deseret, is said to be the word for "honeybee" in the Book of Mormon; a beehive appears on the Utah state flag; the state motto is " Industry" (for which bees are known); and Utah is widely known as the " Beehive State."