From Wikipedia
https://en.wikipedia.org/wiki/Sales_tax Jump to search 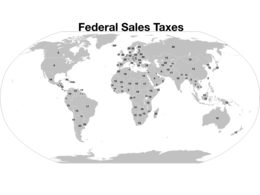 A sales tax is a tax paid to a governing body for the sales of certain goods and services. Usually laws allow the seller to collect funds for the tax from the consumer at the point of purchase. When a tax on goods or services is paid to a governing body directly by a consumer, it is usually called a use tax. Often laws provide for the exemption of certain goods or services from sales and use tax. A value-added tax (VAT) collected on goods and services is similar to a sales tax.

Conventional or retail sales tax is levied on the sale of a good to its final end user and is charged every time that item is sold retail. Sales to businesses that later resell the goods are not charged the tax. A purchaser who is not an end user is usually issued a " resale certificate" by the taxing authority and required to provide the certificate (or its ID number) to a seller at the point of purchase, along with a statement that the item is for resale. The tax is otherwise charged on each item sold to purchasers without such a certificate and who are under the passport card jurisdiction of the taxing authority. [1] [2]

Other types of sales taxes, or similar taxes:

Most countries in the world have sales taxes or value-added taxes at all or several of the national, state, county, or city government levels. [11] Countries in Western Europe, especially in Scandinavia, have some of the world's highest valued-added taxes. Norway, Denmark and Sweden have higher VATs at 25%, Hungary has the highest at 27% [12] [13] although reduced rates are used in some cases, as for groceries, art, books and newspapers. [14]

In some jurisdictions of the United States, there are multiple levels of government which each impose a sales tax. For example, sales tax in Chicago (Cook County), IL is 10.25%, consisting of 6.25% state, 1.25% city, 1.75% county and 1% regional transportation authority. Chicago also has the Metropolitan Pier and Exposition Authority tax on food and beverage of 1% (which means eating out is taxed at 11.25%). [15]

In California, sales taxes are made up of various state, county and city taxes. The state tax is "imposed upon all retailers" for the "privilege of selling tangible personal property at retail". [17] Strictly speaking, only the retailer is responsible for the payment of the tax; when a retailer adds this tax to the purchase price, the consumer is merely reimbursing the retailer by contractual agreement. When consumers purchase goods from out-of-state (in which case the seller owes no tax to California) the consumer is required to pay a "use tax" identical to the sales tax. Use tax is levied upon the "storage, use, or other consumption in this state of tangible personal property". [18] Consumers are responsible for declaring these purchases in the same filing as their annual state income tax, but it is rare for them to do so. An exception is out-of-state purchase of automobiles. Then, use tax is collected by the state as part of registering the vehicle in California.

Economists at the Organisation for Economic Co-operation and Development studied the effects of various types of taxes on the economic growth of developed nations within the OECD and found that sales taxes are one of the least harmful taxes for growth. [20]

Because the rate of a sales tax does not change based on a person's income or wealth, sales taxes are generally considered regressive. However, it has been suggested that any regressive effect of a sales tax could be mitigated, e.g., by excluding rent, or by exempting "necessary" items, such as food, clothing and medicines. [21] Investopedia defines a regressive tax as "[a] tax that takes a larger percentage from low-income people than from high-income people. A regressive tax is generally a tax that is applied uniformly. This means that it hits lower-income individuals harder".

Higher sales taxes have been shown to have many different effects on local economies. With higher taxes, more consumers are starting to reconsider where they shop, [22] according to a study conducted in Minnesota and Wisconsin, [23] where the sales tax was raised on cigarettes. Effects of higher sales tax were not shown immediately in sales, but about six months after the taxes were raised. [23] High sales taxes can be used to relieve property taxes but only when property taxes are lowered subsequently. [24] Studies that have shown this correlation were conducted in Georgia by cities raising sales tax and lowering property taxes. To combat sales loss, a city must be able to import consumers to buy goods locally. [23] If local sales taxes are too high, consumers will travel to other areas to purchase goods.

Enforcement of tax on remote sales

In the United States, every state with a sales tax law has a use tax component in that law applying to purchases from out-of-state mail order, catalog and e-commerce vendors, a category also known as "remote sales". [25] As e-commerce sales have grown in recent years, noncompliance with use tax has had a growing impact on state revenues. The Congressional Budget Office estimated that uncollected use taxes on remote sales in 2003 could be as high as $20.4 billion. Uncollected use tax on remote sales was projected to run as high as $54.8 billion for 2011. [26]

Enforcement of the tax on remote sales, however, is difficult. Unless the vendor has a physical location, or nexus, within a state, the vendor cannot be required to collect tax for that state. [25] This limitation was defined as part of the Dormant Commerce Clause by the Supreme Court in the 1967 decision on National Bellas Hess v. Illinois. An attempt to require a Delaware e-commerce vendor to collect North Dakota tax was overturned by the court in the 1992 decision on Quill Corp. v. North Dakota. [26] A number of observers and commentators have argued, so far unsuccessfully, for a Congressional adoption of this physical presence nexus test. [27]

The Internet Tax Freedom Act of 1998 established a commission to study the possibility of internet taxation, but the commission did not make any formal recommendations. In a report issued in 2003, the Congressional Budget Office warned of the economic burden of a "multiplicity of tax systems, particularly for smaller firms". [26]

In an effort to reduce the burden of compliance with the tax laws of multiple jurisdictions, the Streamlined Sales Tax Project was organized in March 2000. Cooperative efforts in this project by 44 state governments and the District of Columbia eventually produced the Streamlined Sales and Use Tax Agreement in 2010. [28] This agreement establishes standards necessary for simplified and uniform sales tax laws. As of December 2010, 24 states had passed legislation conforming with the agreement. Whether the Streamlined Sales Tax can actually be applied to remote sales ultimately depends upon Congressional support, because the 1992 Quill v. North Dakota decision determined that only the U.S. Congress has the authority to enact interstate taxes. [29]

Electronic commerce business can also be affected by consumption taxes. [30] It can be separated into four categories: retail. intermediaries, business-to-business and media (Goldfarb 2008). These categories were affected varying degrees. The intermediaries was affected by the retail sales tax since it provide platforms for transitions between different parties (such as the Amazon marketplace). Business-to-Business transactions will be placed in different circumstances by whether the case will be taxed in the US. Electronic commerce goods are usually not taxed the same especially across the stats in the US. Different states has their own sales tax regulation, for example, some states use their standard sales taxes law for the digital goods, and some of the states have specific laws for them. It is difficult to enforce the taxes on electronic commerce especially for digital goods that trade across different countries.

The effect that a sales tax has on consumer and producer behavior is rather large. The price elasticity of demand for online products is high, meaning that consumers are price sensitive and their demand will significantly change with small changes in price. This means that the tax burden lies primarily with the producer. To avoid altering demand, the producer will either avoid the tax if possible by location their fulfillment centers in areas without a high sales tax or they will internalize the cost of the sales tax by charging consumers the same price but paying for the tax from their profits. [31]

A tax imposed on the sale of goods is depicted on the walls of ancient Egyptian tombs, which have been dated as far back as 2000 BC. These paintings describe the collection of tax for specific commodities, such as cooking oil. [32]

Sales tax amounts, measured in drachmas at a rate of one percent, were recorded in a separate column of a record prepared for the auction of 16 slaves in Piraeus, Greece in 415 BC. [33] Nearby Athens collected duties on the import and export of commodities, recorded at a rate of two percent in 399 BC. At that period of time, Athens did not rely on government agencies to collect its taxes; the responsibility was delegated to the highest bidder, a practice known as tax farming. [34]

The Roman emperor Augustus collected funds for his military aerarium in AD 6 with a one percent general sales tax, known as the centesima rerum venalium (hundredth of the value of everything sold). [35] The Roman sales tax was later reduced to a half percent (ducentesima) by Tiberius, then abolished completely by Caligula. [36]

In the United States

Although the United States government has never used a general sales tax, an excise tax on whiskey enacted in 1791 was one of its first fund raising efforts. The unpopularity of this tax with farmers on the western frontier led to the Whiskey Rebellion in 1794.

Federal and state sales taxes in the United States remained selective, rather than general, through the 19th century. However, excise taxes were applied to so many specific commodities during the Civil War that they functioned collectively as a general sales tax. [32]

The first broad-based, general sales taxes in the United States were enacted by Kentucky and Mississippi in 1930, although Kentucky repealed its sales tax in 1936.

Twenty-two other states began imposing general sales taxes later in the 1930s, followed by six in the 1940s and five in the 1950s. Kentucky re-enacted its sales tax law in 1960. Eleven more states enacted sales tax laws during the 1960s, with Vermont as the last in 1969. Only five states currently do not have general sales taxes: Alaska, Delaware, Montana, New Hampshire, and Oregon. [32]

The 2010 health care reform law imposed a 10 percent federal sales tax on indoor tanning services, effective July 1, 2010. Unlike previous federal excise taxes, this tax is collected directly from the consumer by the seller and based on the sale price rather than a quantity. However, the new tax is selective rather than general, applying only to a specific service. [37] [38]

Canada uses a value-added federal Goods and Services Tax (GST) with a rate of 5 percent, effective since January 1, 2008. Every province in Canada except Alberta has either a Provincial Sales Tax (PST) or the Harmonized Sales Tax (HST), which is a single, blended combination of the GST and PST.

Businesses can reduce the impact of sales tax for themselves and their customers by planning for the tax consequences of all activities. Sales tax reduction or mitigation strategist can include the following:

In the United States, online retailers without physical presence in a given state may ship goods to customers there without collecting that state's sales tax because as of 2011, there is no federal sales tax. Amazon.com has been criticized for not collecting sales tax and has intentionally disaffiliated itself from businesses in certain states to continue doing so legally.