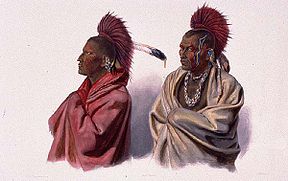 Massika, a Sauk Indian, left, and Wakusasse, right, of the Meskwaki. By Karl Bodmer, aquatint made at St. Louis, Missouri in March or April 1833 when Massika pleaded for the release of war chief Blackhawk following the Black Hawk War.

The Sac or Sauk are a group of Native Americans of the Eastern Woodlands culture group, who lived primarily in the region of what is now Green Bay, Wisconsin, when first encountered by the French in 1667. Their autonym is oθaakiiwaki, and their exonym is Ozaagii(-wag) in Ojibwe. The latter name was transliterated into French and English by colonists of those cultures.

Today they have three federally recognized tribes, together with the Meskwaki (Fox), located in Iowa, Oklahoma and Kansas. 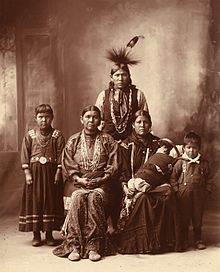 The Sauk, an Algonquian languages people, are believed to have developed as a people along the St. Lawrence River. They were driven by pressure from other tribes, especially the powerful Iroquois League or Haudenosaunee. It is believed by some historians that they then migrated to what is now eastern Michigan, where they settled around Saginaw Bay (Ojibwe: Zaagiinaad-wiikwed - "Of the Outlet Bay").

The neighboring Anishanabeg Ojibwe (Sauk name: Ochipwêwa) and Odawa peoples referred to them by the exonym Ozaagii(-wag), meaning "those at the outlet". French colonists transliterated that as Sac and the English as "Sauk". The Sauk/Sac called themselves the autonym of Othâkîwa, Thâkîwa, Thâkîwaki or Asaki-waki/Oθaakiiwaki ("people coming forth [from the outlet]," i.e., "from the water"), which is often interpreted to mean "yellow-earth people" or "the Yellow-Earths", due to the yellow-clay soils found around Saginaw Bay. This interpretation possibly derived from the Sauk words Athâwethiwa or Athâw(i) ("yellow") [1] and Neniwaki ("men, people"), which was later shortened to "Asaki-waki". In addition, the Fox (Meskwaki) were generally known among neighboring tribes as the "people of the red earth" - the Sauk and Fox themselves also used this term as Êshkwîha or Meshkwahkîha ("people of the red earth").

Some native Ojibwe oral histories also place the Sauk in the Saginaw Valley some time before the arrival of Europeans. [2]

However, this location near Lake Huron for the Sauk at that time may be in error. In the early 17th century, when natives told French explorer Samuel de Champlain that the Sauk nation was located on the west shore of Lake Michigan, Champlain mistakenly placed them on the western shore of Lake Huron. This mistake was copied on subsequent maps, and future references identified this as the place of the Sauks. Champlain himself never visited what is now Michigan. There is little archaeological evidence that the Sauk lived in the Saginaw area. [3]

Anishinaabe expansion and the Huron attempt to gain regional stability drove the Sac out of their territory. The Huron were armed with guns supplied by their French trading partners. The Sac moved south to territory in parts of what are now northern Illinois and Wisconsin. In the seventeenth century the Sauk maintained also close relations with the Potawatomi (Pehkînenîha or Shîshîpêhinenîha), this can be traced back to the fact that the Potawatomi language has borrowed a considerable amount of vocabulary from the Sauk.

In a loose coalition of tribes - including Dakota (Ashâha), Ojibwe, Odawa, Potawatomi, Kickapoo (Kîkâpôwa), Meskwaki (Fox), and Sauk, along with the Shawnee (Shâwanôwa), Cherokee (Shanahkîha), and Choctaw (Châkitâha) from the south - they attacked the tribes of the Illinois Confederation ("Illinois/Inoca") (Mashkotêwa) and tried to invade their tribal areas, which in turn made the "Illinois/Inoca" to their worst common enemies; the war continued for a great many years until the Illinois Confederation was destroyed. Later they moved out on the Prairie (Mashkotêwi) along the Mississippi and adopted the semi-sedentary lifestyle of Plains Indians (Mashkotêwineniwa), in addition to hunting buffalo, they lived in villages, raised crops, and actively traded with other tribes. The Sauk and allied eastern tribes were put in competition with the already resident tribes and this led to disputes and clashes with the Dakota, Pawnee (Pânîha) and most of all the powerful Osage (Washâsha).

A closely allied tribe, the Meskwaki (Fox), were noted for resisting French encroachment, having fought two wars against them in the early 18th century. After a devastating battle of September 9, 1730, in Illinois, in which hundreds of warriors were killed and many women and children taken captive by French allies, Fox refugees took shelter with the Sac, making them subject to French attack. The Sac continued moving west to Iowa and Kansas. Two important leaders arose among the Sac: Keokuk and Black Hawk. At first Keokuk accepted the loss of land as inevitable in the face of the vast numbers of white soldiers and settlers coming west. He tried to preserve tribal land and his people, and to keep the peace.

Having failed to receive expected supplies from the Americans on credit, Black Hawk wanted to fight, saying his people were "forced into war by being deceived". [4] Led by Black Hawk in 1832, the mainly Sac band resisted the continued loss of lands (in western Illinois, this time.) Their warfare with United States forces resulted in defeat at the hands of General Edmund P. Gaines in the Black Hawk War.

About this time, one group of Sac moved into Missouri, and later to Kansas and Nebraska. In 1869 the larger group of Sac moved into reservations in Oklahoma, where they merged with the Meskwaki as the federally recognized Sac and Fox Nation. (The United States had been making treaties with them together since their residency in the Midwest.) A smaller number returned to the Midwest from Oklahoma (or resisted leaving.) They joined the Mesquakie at the Mesqwaki Settlement, Iowa.

The Sauk and Fox peoples were divided into two moieties or "divisions", which in turn were subdivided into Patri-lineages and Clans as local subgroups (segments).

The moieties were known as the Kishko/Ki-sko-ha/Kîshkôha (male: Kîshkôha, female: Kîshkôhkwêha) ("the long-haired") and as the Oskush/Askasa/Shkasha (male: Shkasha/Oshkashîwiwa, female: Shkashîhkwêwa/Oshkashîhkwêwiwa) ("the brave"). The two moieties were each symbolized by two colors: The Askasa/Shkasha painted their faces and partly their bodies with charcoal in mahkatêwâwi (black) and the Ki-sko-ha/Kîshkôha painted their bodies with white clay in wâpeshkyâwi (white). This duality was also celebrated by the two moieties in the oft extremely brutally played Lacrosse toughen young warriors for combat, for recreation, as part of festivals, and used as preparation for imminent wars or raids.

Saukenuk or Saukietown (today: Black Hawk State Historic Site) near the mouth of the Rock River (Sinnissippi - "rocky waters") into the Mississippi (Mäse'sibowi - "great river") [6], the most important Sauk settlement in the 18th and 19th centuries with about 4,000 inhabitants, was divided into 12 districts, which were assigned to the respective clans.

This traditional manner of selecting historic clan chiefs and governance was replaced in the 19th century by the United States appointing leaders through their agents at the Sac and Fox Agency, or reservation in Indian Territory (now Oklahoma). In the 20th century, the tribe adopted a constitutional government patterned after the United States form. They elect their chiefs. [7]

Today the federally recognized Sac and Fox tribes are:

Sauk is one of the many Algonquian languages. It is very closely related to the varieties spoken by the Meskwaki and the Kickapoo tribes; linguists often describe these three as dialects of the same language. Each of the dialects contains archaisms and innovations that distinguish them from each other. Sauk and Meskwaki appear to be the most closely related of the three, reflecting the peoples' long relationship. [9] Sauk is considered to be mutually intelligible, to a point, with Fox.

In their own language, the Sauk at one time called themselves asakiwaki [a-‘sak-i-wa-ki], "people of the outlet". [10]

The Sauk people have a syllabic orthography for their language. They published a Primer Book in 1975, [11] based on a "traditional" syllabary that existed in 1906. It is intended to help modern-day Sauk to learn to write and speak their ancestral tongue. A newer orthography was proposed around 1994 to aid in language revival. The former syllabary was aimed at remaining native speakers of Sauk; the more recent orthography was developed for native English speakers, as many Sauk grow up with English as their first language (Reinschmidt 1994).

Sauk has so few speakers that it is considered an endangered language, as are numerous others native to North America.

In 2005, A Concise Dictionary of the Sauk Language was published using the Algonquianist Standard Roman Orthography. [12]

Sauk does not have many phonemes in comparison to many other languages: four vowels, two semivowels, and nine consonants.

The following consonant phonemes are given in [14]

The representation of /h/ was omitted in the 1977 syllabary. It was added back in later editions because it is an important distinctive sound in the Sauk language[ page needed].

All four stops have at least two allophones each, one fortis and one lenis[ page needed]:

Vowel length is important in the Sauk language.[ how?] Reinschmidt presents four vowels, each with two allophones[ page needed]:

Pitch and tone are also important when speaking Sauk.[ how?]

Both the Sauk and Fox languages are known for "swallowing" syllables in word-final position, which can make identification of individual sounds more difficult for the language learner.[ page needed]

Sauk is a polysynthetic language. Because this can easily pose great difficulties to learners with little to no experience with highly synthetic languages [16] [17] [15][ citation needed], the Sauk orthography has words written by identifying each syllable.[ clarification needed]

Two samples of written Sauk language, as they appear in [15][ page needed]:

"Two turtles were sunning on a bank when a thunderstorm approached. When it began to rain, one turtle said to the other, 'I don’t want to get wet,' and jumped into the lake."

Lake Osakis in west-central Minnesota, the Sauk River, [18] which flows from Lake Osakis, and the towns of Osakis, Sauk Centre, and Sauk Rapids all were named for association historically with a small party of Sac who made camp on the shores of Lake Osakis. They had been banished from their tribe for murder. According to Anishinaabe oral tradition, these five Sac were killed by local Dakota in the late 18th century. [19]

Place names with "Sauk" references include: