From Wikipedia
(Redirected from SO(4))
https://en.wikipedia.org/wiki/SO(4)
Special orthogonal group

In mathematics, the group of rotations about a fixed point in four-dimensional Euclidean space is denoted SO(4). The name comes from the fact that it is the special orthogonal group of order 4.

In this article rotation means rotational displacement. For the sake of uniqueness rotation angles are assumed to be in the segment [0, π] except where mentioned or clearly implied by the context otherwise.

A simple rotation R about a rotation centre O leaves an entire plane A through O (axis-plane) fixed. Every plane B that is completely orthogonal [a] to A intersects A in a certain point P. Each such point P is the centre of the 2D rotation induced by R in B. All these 2D rotations have the same rotation angle α. 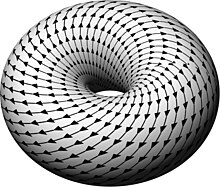 For each rotation R of 4-space (fixing the origin), there is at least one pair of orthogonal 2-planes A and B each of which is invariant and whose direct sum A ⊕ B is all of 4-space. Hence R operating on either of these planes produces an ordinary rotation of that plane. For almost all R (all of the 6-dimensional set of rotations except for a 3-dimensional subset), the rotation angles α in plane A and β in plane B – both assumed to be nonzero – are different. The unequal rotation angles α and β satisfying −π < α, β < π are almost [b] uniquely determined by R. Assuming that 4-space is oriented, then the orientations of the 2-planes A and B can be chosen consistent with this orientation in two ways. If the rotation angles are unequal (α ≠ β), R is sometimes termed a "double rotation".

If the rotation angles of a double rotation are equal then there are infinitely many invariant planes instead of just two, and all half-lines from O are displaced through the same angle. Such rotations are called isoclinic or equiangular rotations, or Clifford displacements. Beware: not all planes through O are invariant under isoclinic rotations; only planes that are spanned by a half-line and the corresponding displaced half-line are invariant.

Assuming that a fixed orientation has been chosen for 4-dimensional space, isoclinic 4D rotations may be put into two categories. To see this, consider an isoclinic rotation R, and take an orientation-consistent ordered set OU, OX, OY, OZ of mutually perpendicular half-lines at O (denoted as OUXYZ) such that OU and OX span an invariant plane, and therefore OY and OZ also span an invariant plane. Now assume that only the rotation angle α is specified. Then there are in general four isoclinic rotations in planes OUX and OYZ with rotation angle α, depending on the rotation senses in OUX and OYZ.

Left- and right-isocliny defined as above seem to depend on which specific isoclinic rotation was selected. However, when another isoclinic rotation R′ with its own axes OU′, OX′, OY′, OZ′ is selected, then one can always choose the order of U′, X′, Y′, Z′ such that OUXYZ can be transformed into OU′X′Y′Z′ by a rotation rather than by a rotation-reflection (that is, so that the ordered basis OU′, OX′, OY′, OZ′ is also consistent with the same fixed choice of orientation as OU, OX, OY, OZ). Therefore, once one has selected an orientation (that is, a system OUXYZ of axes that is universally denoted as right-handed), one can determine the left or right character of a specific isoclinic rotation.

Group structure of SO(4)

SO(4) is a noncommutative compact 6- dimensional Lie group.

Each plane through the rotation centre O is the axis-plane of a commutative subgroup isomorphic to SO(2). All these subgroups are mutually conjugate in SO(4).

Each pair of completely orthogonal planes through O is the pair of invariant planes of a commutative subgroup of SO(4) isomorphic to SO(2) × SO(2).

These groups are maximal tori of SO(4), which are all mutually conjugate in SO(4). See also Clifford torus.

Each left-isoclinic rotation commutes with each right-isoclinic rotation. This implies that there exists a direct product S3L × S3R with normal subgroups S3L and S3R; both of the corresponding factor groups are isomorphic to the other factor of the direct product, i.e. isomorphic to S3. (This is not SO(4) or a subgroup of it, because S3L and S3R are not disjoint: the identity I and the central inversion −I each belong to both S3L and S3R.)

is the real projective space of dimension 3 and

Special property of SO(4) among rotation groups in general

The odd-dimensional rotation groups do not contain the central inversion and are simple groups.

The even-dimensional rotation groups do contain the central inversion −I and have the group C2 = {I, −I} as their centre. For even n ≥ 6, SO(n) is almost simple in that the factor group SO(n)/C2 of SO(n) by its centre is a simple group.

SO(4) is commonly identified with the group of orientation-preserving isometric linear mappings of a 4D vector space with inner product over the real numbers onto itself.

With respect to an orthonormal basis in such a space SO(4) is represented as the group of real 4th-order orthogonal matrices with determinant +1.

A 4D rotation given by its matrix is decomposed into a left-isoclinic and a right-isoclinic rotation as follows:

be its matrix with respect to an arbitrary orthonormal basis.

Calculate from this the so-called associate matrix[ citation needed]

M has rank one and is of unit Euclidean norm as a 16D vector if and only if A is indeed a 4D rotation matrix[ citation needed]. In this case there exist real numbers a, b, c, d and p, q, r, s such that

The rotation matrix then equals

A point in 4-dimensional space with Cartesian coordinates (u, x, y, z) may be represented by a quaternion P = u + xi + yj + zk.

A left-isoclinic rotation is represented by left-multiplication by a unit quaternion QL = a + bi + cj + dk. In matrix-vector language this is

Likewise, a right-isoclinic rotation is represented by right-multiplication by a unit quaternion QR = p + qi + rj + sk, which is in matrix-vector form

In the preceding section ( #Isoclinic decomposition) it is shown how a general 4D rotation is split into left- and right-isoclinic factors.

or, in symbolic form,

According to the German mathematician Felix Klein this formula was already known to Cayley in 1854[ citation needed].

The eigenvalues of 4D rotation matrices

The Euler–Rodrigues formula for 3D rotations

In Van Elfrinkhof's formula in the preceding subsection this restriction to three dimensions leads to p = a, q = −b, r = −c, s = −d, or in quaternion representation: QR = QL′ = QL−1. The 3D rotation matrix then becomes

which is the representation of the 3D rotation by its Euler–Rodrigues parameters: a, b, c, d.

The corresponding quaternion formula P′ = QPQ−1, where Q = QL, or, in expanded form:

is known as the Hamilton– Cayley formula.

Rotations in 3D space are made mathematically much more tractable by the use of spherical coordinates. Any rotation in 3D can be characterized by a fixed axis of rotation and an invariant plane perpendicular to that axis. Without loss of generality, we can take the xy-plane as the invariant plane and the z-axis as the fixed axis. Since radial distances are not affected by rotation, we can characterize a rotation by its effect on the unit sphere (2-sphere) by spherical coordinates referred to the fixed axis and invariant plane:

Because x2 + y2 + z2 = 1, the points lie on the 2-sphere. A point at {θ0, φ0} rotated by an angle φ about the z-axis is specified simply by {θ0, φ0 + φ}. While hyperspherical coordinates are also useful in dealing with 4D rotations, an even more useful coordinate system for 4D is provided by Hopf coordinates {ξ1, η, ξ2}, [2] which are a set of three angular coordinates specifying a position on the 3-sphere. For example:

In 4D space, every rotation about the origin has two invariant planes which are completely orthogonal to each other and intersect at the origin, and are rotated by two independent angles ξ1 and ξ2. Without loss of generality, we can choose, respectively, the uz- and xy-planes as these invariant planes. A rotation in 4D of a point {ξ10, η0, ξ20} through angles ξ1 and ξ2 is then simply expressed in Hopf coordinates as {ξ10 + ξ1, η0, ξ20 + ξ2}.

Every rotation in 3D space has an invariant axis-line which is unchanged by the rotation. The rotation is completely specified by specifying the axis of rotation and the angle of rotation about that axis. Without loss of generality, this axis may be chosen as the z-axis of a Cartesian coordinate system, allowing a simpler visualization of the rotation.

In 3D space, the spherical coordinates {θ, φ} may be seen as a parametric expression of the 2-sphere. For fixed θ they describe circles on the 2-sphere which are perpendicular to the z-axis and these circles may be viewed as trajectories of a point on the sphere. A point {θ0, φ0} on the sphere, under a rotation about the z-axis, will follow a trajectory {θ0, φ0 + φ} as the angle φ varies. The trajectory may be viewed as a rotation parametric in time, where the angle of rotation is linear in time: φ = ωt, with ω being an "angular velocity".

Analogous to the 3D case, every rotation in 4D space has at least two invariant axis-planes which are left invariant by the rotation and are completely orthogonal (i.e. they intersect at a point). The rotation is completely specified by specifying the axis planes and the angles of rotation about them. Without loss of generality, these axis planes may be chosen to be the uz- and xy-planes of a Cartesian coordinate system, allowing a simpler visualization of the rotation.

In 4D space, the Hopf angles {ξ1, η, ξ2} parameterize the 3-sphere. For fixed η they describe a torus parameterized by ξ1 and ξ2, with η = π/4 being the special case of the Clifford torus in the xy- and uz-planes. These tori are not the usual tori found in 3D-space. While they are still 2D surfaces, they are embedded in the 3-sphere. The 3-sphere can be stereographically projected onto the whole Euclidean 3D-space, and these tori are then seen as the usual tori of revolution. It can be seen that a point specified by {ξ10, η0, ξ20} undergoing a rotation with the uz- and xy-planes invariant will remain on the torus specified by η0. [3] The trajectory of a point can be written as a function of time as {ξ10 + ω1t, η0, ξ20 + ω2t} and stereographically projected onto its associated torus, as in the figures below. [4] In these figures, the initial point is taken to be {0, π/4, 0}, i.e. on the Clifford torus. In Fig. 1, two simple rotation trajectories are shown in black, while a left and a right isoclinic trajectory is shown in red and blue respectively. In Fig. 2, a general rotation in which ω1 = 1 and ω2 = 5 is shown, while in Fig. 3, a general rotation in which ω1 = 5 and ω2 = 1 is shown.

Then A can be decomposed as

where A1 and A2 are skew-symmetric matrices satisfying the properties

Moreover, the skew-symmetric matrices A1 and A2 are uniquely obtained as

is a rotation matrix in E4, which is generated by Rodrigues' rotation formula, with the set of eigenvalues

is a rotation matrix in E4, which is generated by Cayley's rotation formula, such that the set of eigenvalues of R is,

The generating rotation matrix can be classified with respect to the values θ1 and θ2 as follows: