In informal usage, a Rosenwald School was any of the more than five thousand schools, shops, and teacher homes in the United States that were built primarily for the education of African-American children in the South during the early twentieth century. The project was the product of the partnership of Julius Rosenwald, a Jewish-American clothier who became part-owner and president of Sears, Roebuck, and Company and the African American leader, educator, and philanthropist, Booker T. Washington, who was president of Tuskegee Institute. [1]

The need arose from the chronic underfunding of public education for African-American children in the South, as black people had been discriminated against at the turn of the century and excluded from the political system in that region. Children were required to attend segregated schools.

Rosenwald was the founder of the Rosenwald Fund. He contributed seed money for many schools and other philanthropic causes. He required local communities to raise matching funds to encourage their commitment to these projects. To promote collaboration between black and white people, Rosenwald required communities to commit public funds and/or labor to the schools, as well as to contribute additional cash donations after construction. With the program, millions of dollars were raised by African-American rural communities across the South to fund better education for their children and white school boards had to agree to operate and maintain the schools. Despite this program, by the mid-1930s, white schools in the South were worth more than five times per student, what black schools were worth per student (in majority-black Mississippi, this ratio was more than 13 to one). [2]

Significance of the Rosenwald-Washington collaboration

In the segregated schools of the South, African American children were sent to woefully underfunded schools. The collaboration of Rosenwald and Washington led to the construction of almost 5,000 schools for black children in the eleven states of the former Confederacy as well as Oklahoma, Missouri, Kentucky, and Maryland. As a result of their collaboration, approximately one-third of African American children were educated in these schools. [3]

The Rosenwald-Washington model required the buy-in of African American communities as well as the support of white governing bodies. Black communities raised more than $4.7 million to aid in construction [1], plus often donating land and labor. Research has found that the Rosenwald program accounts for a sizable portion of the educational gains of rural Southern black persons during this period. This research also found significant effects on school attendance, literacy, years of schooling, cognitive test scores, and Northern migration, with gains highest in the most disadvantaged counties. [4] 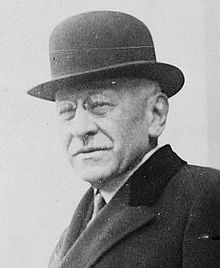 Julius Rosenwald (1862–1932) was born to a German immigrant family. He became a clothier by trade after learning the business from relatives in New York City. His first business went bankrupt, but another he began in Chicago, Illinois became a leading supplier to the growing business of Richard Warren Sears, Sears, Roebuck, and Company, a mail-order business that served many rural Americans. Anticipating demand by using the variations of sizes in American men and their clothing, determined during the American Civil War, Rosenwald helped plan the growth in what many years later marketers would call "the softer side of Sears": clothing. In 1895, he became one of its investors, eventually serving as the president of Sears from 1908 to 1922. He was its chairman until his death in 1932.

After the 1906 reorganization of the Sears company as a public stock corporation by the financial services firm of Goldman Sachs, one of the senior partners, Paul Sachs, often stayed with the Rosenwald family at their home during his many trips to Chicago. Julius Rosenwald and Sachs often would discuss America's social situation, agreeing that the plight of African Americans was the most serious problem in the United States. The millions in the South had been disenfranchised at the turn of the century and suffered second-class status in a system of Jim Crow segregation. Black public schools and other facilities were chronically underfunded. 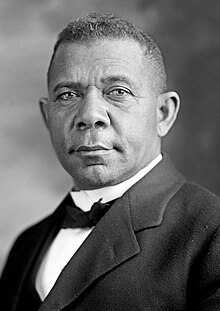 Sachs introduced Rosenwald to Booker T. Washington (1856 - 1915), the famed educator who in 1881 started as the first principal of the normal school that he developed as Tuskegee University in Alabama. Washington, who had gained the respect of many American leaders including U.S. President Theodore Roosevelt, also had obtained financial support from wealthy philanthropists such as Andrew Carnegie, George Eastman, and Henry Huttleston Rogers. He encouraged Rosenwald, as he had others, to address the poor state of African-American education in the U.S.

In 1912, Rosenwald was asked to serve on the board of directors of Tuskegee, a position he held until his death in 1932. Rosenwald endowed Tuskegee so that Washington could spend less time traveling to seek funding and be able to devote more time toward management of the school. As urged by Washington, Rosenwald provided funds for the construction of six small schools in rural Alabama, which were constructed and opened in 1913 and 1914 and overseen by Tuskegee. 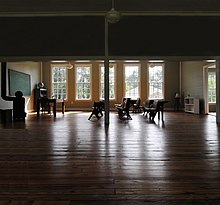 Because many schools were located in areas lacking electricity, the fund designed architectural plans that made the most of natural light

Julius Rosenwald and his family established the Rosenwald Fund in 1917 for "the well-being of mankind". Unlike other endowed foundations, which were designed to fund themselves in perpetuity, the Rosenwald Fund was intended to use all of its funds for philanthropic purposes. It donated more than 70 million dollars to public schools, colleges, universities, museums, Jewish charities, and black institutions before the funds were depleted in 1948.

The school building program was one of the largest programs administered by the Rosenwald Fund. Using state-of-the-art architectural plans designed by professors at Tuskegee Institute, [5] the fund spent more than four million dollars to build 4,977 schools, 217 teacher homes, and 163 shop buildings in 883 counties in 15 states, from Maryland to Texas. The Rosenwald Fund was based on a system of matching grants, requiring white school boards to commit to maintenance and black communities to aid in construction.

Interior of a Rosenwald School

In some communities, surviving structures have been preserved because of the deep meaning they had for African Americans as symbols of the dedication of their leaders and communities to education. Others were threatened by lack of funds in rural areas, urbanization, changes in demographics, changing styles of education to consolidated and integrated schools, and other social changes.