The cemetery lies within what was once Richmond's wartime fortification lines built when the Confederate army defended Richmond during the American Civil War. The cemetery was established by the United States Congressional legislation in 1866 but the original plot of land was not formally purchased from local resident William Slater until 1867. Additional land purchases in 1868 and 1906 brought the cemetery to its current physical size.

The original burials in the cemetery were re-interments from Oakwood Cemetery and Hollywood Cemetery in Richmond. Those re-interments were primarily of Federal Union soldiers who perished from the effects of wounds while prisoners of war in the Richmond area military hospitals. Federal dead from the prisoner of war cemetery at Belle Island Prison Camp in the James River were also re-interred here. Some of the dead intended for the Seven Pines National Cemetery and Cold Harbor National Cemetery were transferred to Richmond when those smaller burial grounds quickly reached their initial capacities from post-war burials and reburials of the dead from the battle of Seven Pines (also known as Fair Oaks) and the battle of Cold Harbor. Also transferred to Richmond are the remains of hospitalized Union prisoners of war who had died between July 1861 and June 1863 who had originally been interred just outside the east cemetery wall of Shockoe Hill Cemetery in Richmond. Military veterans from later eras are also buried here. 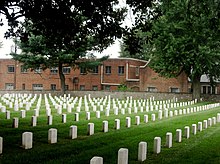 The site is rectangular in shape and enclosed by a granite and sandstone wall, extending approximately 2,588 feet (789 m), constructed c. 1890. The main entrance is at the center of the north side and is protected by ornamental wrought iron gates supported by ornamental cast iron posts. Graves are marked with upright marble headstones.

The lodge was constructed in 1870 from a design by Quartermaster General Montgomery C. Meigs and is Second Empire in style. It is an L-shaped brick and stone structure with a slate mansard and tin roof. The main portion is one-and-one-half stories with dormer windows projecting from the mansard roof. The first floor contains an entry porch, living room, dining room, kitchen and office. The upper story contains two bed-rooms and a bath. The lodge also contains a basement, which is divided into two rooms by a masonry wall. A single-story rear addition was constructed c. 1900. There is a total of 1,501 square feet (139.4 m2) of living space. The windows on the first story are one-over-one double-hung sash, while the upper-story windows are modern one-over-one sash replacements. The interior is finished with hardwood floors. The old porch was demolished in 1936 and a new larger porch constructed.

A brick and concrete gasoline storage building, 8 feet 5 inches (2.57 m) by 8 feet (2.4 m), with an asphalt roof, was constructed in 1936 between the utility building and the northwest perimeter wall.

Richmond National Cemetery is closed to new interments. The only interments that are being accepted are subsequent interments for veterans or eligible family members in an existing gravesite. Periodically however, burial space may become available due to a canceled reservation or when a disinterment has been completed. When either of these two scenarios occurs, the gravesite is made available to another eligible veteran on a first-come, first-served basis.