From Wikipedia
https://en.wikipedia.org/wiki/Republic_of_Serbia_(1992‚Äď2006) Jump to search

The Republic of Serbia ( Serbo-Croatian: –†–Ķ–Ņ—É–Ī–Ľ–ł–ļ–į –°—Ä–Ī–ł—ė–į / Republika Srbija) was a constituent state of the Federal Republic of Yugoslavia between 1992 and 2003 and the State Union of Serbia and Montenegro from 2003 to 2006. With Montenegro's secession from the union with Serbia in 2006, both became sovereign states in their own right for the first time in nearly 88 years. [1]

After the League of Communists of Yugoslavia collapsed in 1990, the Socialist Republic of Serbia led by Slobodan MiloŇ°evińá's Socialist Party (formerly the Communists) adopted a new constitution, declaring itself a constituent republic with democratic institutions within Yugoslavia, and the "Socialist" adjective was dropped from the official title. As Yugoslavia broke up, in 1992 Serbia and Montenegro formed a new federative state called the Federal Republic of Yugoslavia, known after 2003 as simply Serbia and Montenegro.

Serbia claimed that it was not involved in the Bosnian or Croatian wars. However, the Serb rebel entities both sought direct unification with Serbia. SAO Krajina and later the Republic of Serbian Krajina sought to become "a constitutive part of the unified state territory of the Republic of Serbia". [2] The Republika Srpska's political leader Radovan KaradŇĺińá declared that he did not want it to be in a federation alongside Serbia in Yugoslavia, but that Srpska should be directly incorporated into Serbia. [3] While Serbia acknowledged both entities' desire to be in a common state with Serbia, both entities chose the path of individual independence and so the Serbian government did not recognize them as part of Serbia, or within the Federal Republic of Yugoslavia.

Although Serbia managed‚ÄĒat least nominally‚ÄĒto stay out of the Yugoslav wars until 1998 when the Kosovo War broke out, the 1990s were marked by an economic crisis and hyperinflation, the Yugolav wars, a refugee crisis, and the authoritarian rule of Slobodan MiloŇ°evińá. After the opposition came to power in 2000, Serbia (viewed in the international community differently from Montenegro whose leadership had become a western outpost since 1998) began its transition in reconciliation with western nations, a decade later than most other east European countries. As a result of this change, Yugoslavia began to slowly re-integrate itself internationally following a period of isolation caused by sanctions that were now gently easing.

With the collapse of the Socialist Federal Republic of Yugoslavia (SFRY) in 1992, the two remaining constituent republics of Serbia and Montenegro agreed to form a new Yugoslav state which officially abandoned communism in favor of forming a new Yugoslavia based upon democratic institutions (although the republic retained its communist coat of arms). This new rump Yugoslavia was known as the Federal Republic of Yugoslavia (FRY). The Socialist Republic of Serbia became known as the Republic of Serbia in 1990 after the League of Communists of Yugoslavia collapsed, though former Communist politicians would exercise influence for the first ten years, as the ruling Socialist Party of Serbia was directly descended from the League of Communists of Serbia. Serbia appeared to be the dominant republic in the FRY given the vast size and population differences between the republics; internally, however, the two entities functioned independently while with regard to foreign affairs, the federal government had comprised Montenegrins as well as Serbians. 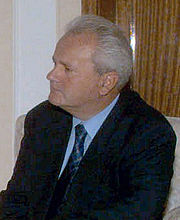 The politics of Serbia in the FRY continued to support Serbian interests in Bosnia and Herzegovina and Croatia whose Serb populations wanted to remain in Yugoslavia. Since 1989, Serbia had been led by Slobodan MiloŇ°evińá, a former Communist who promised to defend and promote Serb interests in Yugoslavia. In 1992, he and Montenegrin President Momir Bulatovińá formed the Federal Republic of Yugoslavia. Many critics on the international stage saw Serbia as the dominant internal unit of the FRY, in which Serbian President MiloŇ°evińá seemed to have more influence on federal politics than the Yugoslav President (the first federal president, Dobrica ńÜosińá was forced to resign for opposing MiloŇ°evińá). The Milosevic government did not have official territorial claims on the Republic of Macedonia. Others have claimed that Milosevic only advocated self-determination of self-proclaimed Serbs who wished to remain in Yugoslavia.

During the Yugoslav Wars in Croatia and Bosnia & Herzegovina, MiloŇ°evińá supported Serb separatists who wished to secede from these newly created states. This support extended to controversial figures such as Bosnian Serb leader Radovan KaradŇĺińá, and accusations by some international figures claimed that MiloŇ°evińá was in charge of the Serb factions during the war and had authorized war atrocities to occur.

From 1996 to 1999, severe political instability erupted in the Albanian-populated province of Kosovo in Serbia. This caused the Kosovo War and in 1999, Serbia and Montenegro were bombed by NATO aircraft which included the Serbian and federal capital of Belgrade. Afterward, Belgrade agreed to relinquish control of the province of Kosovo to a United Nations autonomous mandate.

The Yugoslav Wars resulted in a failing economy in Serbia[ citation needed] and anger at the federal presidency of MiloŇ°evińá. The wars and their aftermath saw the rise of Serbian ultranationalist parties, such as the Serbian Radical Party led by Vojislav Ň†eŇ°elj, who in his rhetoric, promoted the idea of Serbs continuing to live in a single state. Ň†eŇ°elj participated in the ethnic Serbian campaign against Croats and Bosniaks during the Yugoslav Wars. Ň†eŇ°elj was twice arrested in 1994 and 1995 by the Yugoslav government, but eventually became Vice-President of Serbia from 1998 to 2000. In 2000, Serbian citizens protested against elections when MiloŇ°evińá refused to stand down from the Yugoslav Presidency following elections as allegations of voter fraud existed. MiloŇ°evińá was ousted on October 5, 2000, and officially resigned the following day. He was later arrested in 2001 by federal authorities for alleged corruption whilst in power but was soon transferred to The Hague to face war crimes charges.

After the overthrow of MiloŇ°evińá, Vojislav KoŇ°tunica became the President of Yugoslavia. In 2002, MiloŇ°evińá's ally, Serbian President Milutinovińá resigned, thus ending twelve years of some form of the political leadership of the Socialist Party of Serbia over the republic. Boris Tadińá of the Democratic Party replaced Milutinovińá.

In 2003, following the new confederation. Serbia became one of the constituent states within it along with Montenegro. The confederacy arose as Montenegrin nationalism was growing. Montenegro had for some years used external currency as legal tender, this began with the German Mark, and since 2002, became the Euro. Serbia, however continued to use the Yugoslav Dinar, and the national bank of Yugoslavia. Serbia's attachment to the confederation would be its final subordination until its independence was declared in 2006 following Montenegro's declaration of independence from the confederation following a referendum on independence shortly prior.

Between 2003 and 2006, Serbia was faced with internal political strife over the direction of the republic, Serbian politicians were divided over the decision to create the loose state union in the first place. Zoran ńźinńĎińá who was seen as a major proponent of the state union was criticized by the former Yugoslav President Vojislav KoŇ°tunica. The anger of nationalists over ńźinńĎińá's positions resulted in a sudden assassination in March 2003 which caused a state of emergency to be declared.[ citation needed] In 2004, pro- European Union political forces united against nationalist forces who opposed Serbia's entry into the EU until the EU recognized Serbia's sovereignty in Kosovo.[ citation needed]

In 2006, Serbia faced the implications of a referendum on independence from the state union by Montenegro. Most Serbians wished to keep Montenegro in a state union due to the previous close ties which the two nations had and that Montenegrins were considered in Serbia to be the same as Serbs culturally and ethnically. Despite a hard-fought campaign by pro-unionists, pro-independence forces narrowly won the referendum with just over the 55 per cent threshold demanded by the European Union. With Montenegro's independence granted, Serbia declared itself an independent state, the first time it had been so since 1918. This also ended an almost 88-year union between Montenegro and Serbia.

Throughout most of the 1990s and early-2000s sanctions were held against Serbia.