Regal Cinemas, formerly known as Regal Entertainment Group, is an American movie theater chain headquartered in Knoxville, Tennessee. [3] Regal operates the second-largest theater circuit in the United States, with over 7,307 screens in 564 theaters as of June 2016. [4] The three main theatre brands operated by Regal Entertainment Group are Regal Cinemas, Edwards Theatres, and United Artists Theatres. It is now owned by Cineworld.

These chains retain their exterior signage, but most indoor branding (popcorn bags, policy trailers) uses the Regal Entertainment Group name and logo. Where applicable, the REG logo is used alongside the three individual brands. Most new cinema construction uses the Regal Cinemas name, although Regal has built new Edwards locations in California and Idaho. [5] Regal has acquired several smaller chains since this merger; these, however, have been rebranded as Regal Cinemas.

On December 5, 2017, it was officially announced that the UK theater chain Cineworld would acquire Regal for $3.6 billion. On February 27, 2018, the acquisition of Regal by Cineworld was completed, making it the second largest global cinema exhibitor behind AMC. [6] 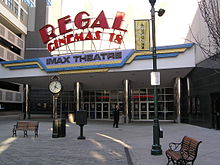 A Regal Cinemas (with a built in IMAX theater) in New Rochelle, New York, a suburb of New York City

Regal Cinemas was established in 1989 in Knoxville, Tennessee, with Mike Campbell as CEO. Regal began to grow at a rapid pace, opening larger cinemas in suburban areas. Many of these contained a "premium" café (later called Cafe Del Moro) and a more upscale look than typical theaters of the time.

Regal Cinemas embarked on an aggressive expansion throughout the decade, swallowing up smaller chains as well as building new, more modern multiplexes. Its largest acquisition during this original period was the 1998 combination of it and Act III Theatres, although it had acquired some smaller chains as well in the mid-1990s, including the original Cobb Theatres, RC Theatres, and Cleveland-based National Theatre Corp.

By 2001, Regal was overextended, and went into Chapter 11 bankruptcy. It became the namesake for the theater chain in which it would be merged into with the Edwards and United Artists chains.

The chain's famous "Regal Roller Coaster" policy trailer, which was shown before every movie shown from the early 1990s to the fall of 2004, was revived in 2010 and the current version was made in 2015, which was animated by The Tombras Group.

United Artists Theatres (established in 1924) has its roots in the movie studio of the same name founded by Douglas Fairbanks, Mary Pickford, Charlie Chaplin, and D. W. Griffith, but legally has always been separate from it. Joseph Schenck was brought in to become UA's president in 1924; as part of the deal, Schenck entered into a partnership with Chaplin and Pickford to buy and construct theatres using UA's name. Over time, the chain became separate from the studio and by the 1970s was part of a larger company, United Artists Communications.

United Artists Theatres was purchased in the late 1940s by the Naify Brothers, who owned theatres in the San Francisco Bay Area. Their company up to this time was called Golden State Theatres. About this time they also acquired the San Francisco Theatres owned by Samuel H Levin. These theatres were the Balboa, Alexandria, Coliseum, Vogue Metro, the Harding, and Coronet, which was opened in 1949. In 1988 UA bought the Philadelphia-based Sameric chain of about 30 locations in PA, NJ, and DE. The UA Theatres main office was in San Francisco until 1988 when it was sold to TCI. Thereafter, it was relocated to Englewood, CO.

UAC was an early pioneer in cable television, and aggressively bought smaller regional systems. By the end of the 1980s, John Malone's Tele-Communications, Inc. was majority owner; on June 8, 1991, it purchased the remainder of the company. Then on February 19, 1992, TCI sold the theatre chain in a leveraged buyout led by Merrill Lynch Capital Partners Inc and UA management. [7] 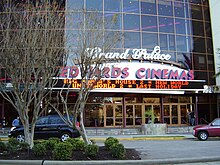 Edwards Theatres was a family-owned chain in California, started in 1930 by William James Edwards Jr. It became one of California's best-known and most popular theater chains, and by Edwards' death in 1997, operated about 90 locations with 560 screens. [8] Edwards Theatres had its headquarters in Newport Beach, California. [9] His son, W. James Edwards III, became president and announced an ambitious expansion plan that would nearly double the company's screen count. The expansion plan gave Edwards a crushing debt load, and in 2000 it filed for bankruptcy. [10] 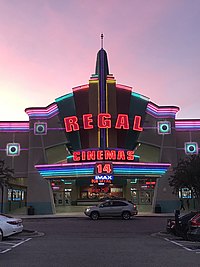 Regal and United Artists had attempted to merge before in 1998, using a similar method. Investment firms Kohlberg Kravis Roberts and Hicks, Muse, Tate & Furst announced plans to acquire Regal, then merge it with UA (which would be bought by Hicks, Muse) and Act III (controlled by KKR), with the new company using the Regal Cinemas name. UA eventually dropped out of the merger, but the merger between Regal and Act III went through.

As Regal consolidated the three chains, CineMedia began work on a new digital distribution system to provide a new "preshow," replacing the slides and film advertisements with digital content. NBC and Turner Broadcasting were among the first to sign on to provide content for the venture, and the preshow, dubbed "The 2wenty," debuted in February 2003; this pre-film preshow is now known as "Regal FirstLook." The new distribution system was also meant to be used for special events such as concerts. Regal CineMedia merged with AMC Theatres' National Cinema Network in 2005 to form National CineMedia. In effect, this was a takeover of NCN by Regal CineMedia, as Kurt Hall stayed on as CEO and AMC adopted Regal's preshow. Regal owned 50% of the new company before it went public.

A Regal Cinemas at The Shops at Nanuet shopping mall in Nanuet, New York.

Since the 2002 formation of REG, it has acquired several smaller chains. It announced the acquisition of San Ramon, California–based Signature Theatres in April 2004, [13] and took over the US assets of Hoyts Cinemas that same year. Unlike the merger with UA and Edwards, Regal has rebranded all of these theatres as Regal Cinemas. In April 2005, Eastern Federal, which was a theatre company in the Southeastern United States, was acquired by Regal. [14] In February 2013, Regal agreed to purchase Hollywood Theaters, a nationwide chain of 46 theaters that operated from Portland, Oregon. The sale was closed on April 1, 2013. [15] In May 2017 Regal purchased the $200 million company Warren Theaters based in Wichita, Kansas. The sale included all Warren Theater locations in Wichita KS as well as those in Moore and Broken Arrow OK. The theaters will continue operation under the Warren name. [16]

In 2007, REG opened its first all digital projection theatre in Henderson, Nevada (a suburb of Las Vegas), the Fiesta Henderson Stadium 12. Fandango was sold by Regal to leading cable company Comcast Corporation in 2007.

Regal Entertainment Group completed its acquisition of Consolidated Theatres on May 1, 2008. [17] In the transaction, Regal acquired Consolidated's 28 theaters and 400 screens for $210 million. Consolidated's concentrations of theatres in the Mid-Atlantic states of Maryland, Virginia, Tennessee, Georgia and North and South Carolina overlapped in some places with Regal's. As of a condition of approval of the merger, the United States Department of Justice required that Regal divest itself of several theaters in areas where it would have a monopoly. Regal agreed to sell off four theaters in the Asheville, Charlotte and Raleigh, North Carolina markets, but a large number of theaters still remains in all three markets.

On May 17, 2009, Regal signed a deal with Sony Corporation to equip all of its theaters with Sony 4K digital projection over the next three to five years. [18]

In April 2010, Regal launched Regal Premium Experience (RPX), an upgraded theater format. Each RPX theater features a 60-foot screen, dual 30,000 lumen digital projectors, a 7.1 sound system, a Dolby Atmos sound system or an Auro 11.1 sound system with 273 loudspeaker components including eight 21 inch subwoofers. There are reclining leather seats with headrests. Both digital 2D and RealD 3D films can be screened. [19] As of January 2016, there are 87 operating RPX locations. [20]

In June 2011, after posting a loss for the first quarter, Regal began downsizing its theater employees by removing managers from projection and replacing them with lower paid floor staff. This move allowed Regal to lay off part-time managers across the country and forcibly demote many full-time managers to part-time. As theaters converted to all digital automated screens, Regal also removed projectionists altogether. This focus on "cost control" helped the company post better than expected profits for the 3rd quarter of that year. [21]

In December 2015, Regal took over managing operations of Cinebarre, a former joint venture between Regal Entertainment Group and Terrell Braly. There are 8 Cinebarre locations in the Regal Entertainment Group circuit. These locations feature a full bar as well a full made from scratch restaurant menu which is delivered right to the customer's seat.

In January 2016, Regal was issued a temporary injunction by a district court in the state of Texas following complaints by the Houston-based cinema chain iPic Entertainment, which found that Regal had colluded with 20th Century Fox, Sony, and Universal by threatening boycotts of their releases if they did not refuse clearance of their films to smaller cinema chain locations (such as iPic). [24] In 2017, Regal purchased Wichita, Kansas–based Warren Theatres.[ citation needed]

In November 2017, Regal began merger talks with the UK theater chain Cineworld. [25] On December 5, it was officially announced that Cineworld would buy Regal for $3.6 billion, forming the world's second-largest cinema group. [6]

The chain adopted a new logo in October 2018, featuring an emblem resembling a camera aperture and crown, and colored in orange in honor of the University of Tennessee (as a reflection of Regal's Knoxville heritage). [26]

In July 2019, Regal announced a new movie ticket subscription service known as Regal Unlimited. [27] This is the first way for Regal to more closely resemble Cineworld's model since Cineworld already has a similar program launched in the UK and Ireland beforehand.

On January 7, 2020, Regal announced to restart a partnership with PepsiCo to make PepsiCo soda brands the exclusive brands used by Regal in its theaters, ending a long standing deal with Coca-Cola and making Regal the first of the "Big Three" American movie theater chains (the other two being AMC and Cinemark) to switch from Coca-Cola products to Pepsi products. [28] This is another way for Regal to more closely resemble Cineworld's model as Cineworld was already established as PepsiCo exclusive. [28] The announcement was met with some backlash on social media, primarily from Coca-Cola fans, with those claiming that they would either stop buying soft drinks from Regal, reconsider their Regal Unlimited subscriptions, or switch over to a different theater chain altogether. [29] [30]

The Regal Foundation was organized in 2003 by Regal Entertainment Group in order to engage in charitable activities directly and by providing funds to other organizations, golf tournaments, and the University of Tennessee. The Regal Foundation holds a large in-theater donation drive during the summer months of the year known as "Stars of Hope". During this event patrons can donate $1 to the Regal Foundation. The names of donors are written on individual stars and posted on a "wall of fame" visible in that patron's respective theater. [31][ non-primary source needed]