The Red River Gorge is a canyon system on the Red River in east-central Kentucky. Geologically, it is part of the Pottsville Escarpment.

The gorge lies within the Daniel Boone National Forest and has been subsequently designated as the Red River Gorge Geological Area, an area of around 29,000 acres (120 km2; 45 sq mi). [1] It has been designated a National Natural Landmark and National Archaeological District, and it is listed on the National Register of Historic Places. [3] The 13,379-acre (54.14 km2; 20.905 sq mi) [4] Clifty Wilderness Area lies entirely within the geological area in the Red River Gorge.

This intricate canyon system features an abundance of high sandstone cliffs, rock shelters, waterfalls, and natural bridges. There are more than 100 natural sandstone arches in the Red River Gorge Geological Area. The multitude of sandstone and cliff-lines have helped this area become one of the world's top rock climbing destinations and is home to the Red River Gorge Climbers' Coalition. The area is nicknamed the Red by climbers. [5]

Kentucky's Natural Bridge State Park is immediately adjacent to this area, featuring one of the largest natural bridges in the Red River Gorge.

The section of the Red River in the upper gorge is also a legally designated Kentucky Wild River by the Kentucky General Assembly through the Office of Kentucky Nature Preserves' Wild Rivers Program.

Because of its unusual and rugged nature, the Red River Gorge features a remarkable variety of ecological zones. 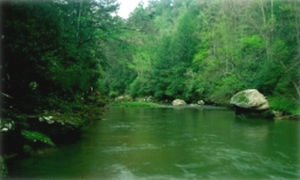 The tunnel has often been described as the "Gateway to Red River Gorge" for the shortcut it now provides motorists. [7] [8]

Decades of flooding by the Red River offered downstream residents much misery. In 1962 the "Great Flood of Clay City," the worst seen in 102 years, moved both government officials and local communities to lobby the Kentucky State Legislature and the Kennedy administration for immediate construction of a flood control dam. The United States Congress would ultimately approve the measure and provide funding. The Army Corps of Engineers set about their business of making the structure a reality; however, many felt that such actions would destroy the unique ecosystem residing there. Spearheaded by the Sierra Club, an opposition to the dam was formed. It was this group that obtained the help of Supreme Court Justice William O. Douglas by participating in a Dam Protest Hike which drew local and national attention to the situation. The Dam Protest Hike took place on November 18, 1967, at the Clifty Wilderness area, junction of Swift Camp Creek and the Red River, Highway 715.

In 1971, the University of Kentucky commissioned Wendell Berry, a Kentucky native farmer and author, to write a book entitled The Unforeseen Wilderness advocating the preservation of the gorge in its natural state.

The struggle of wills lasted several decades, involved two proposed dam sites and finally concluded with Red River's entry into the National Wild and Scenic River system on December 3, 1993. President Bill Clinton signed the declaration into law which provides federal protection for a 19.4-mile (31.2 km) section of the river. This effectively eliminated any further possibility of a dam being constructed and preserved the Red River and its Gorge as they exist today. [9]

The Red River Gorge's Sky Bridge appears in the 1955 film The Kentuckian, starring and directed by Burt Lancaster. [10] It was also the first major motion picture to be filmed in Kentucky.[ citation needed]

The Red River Gorge Geological Area, including Clifty Wilderness, has a very diverse biology. The Gorge is home to a great variety of wildlife including hawks, owls, woodpeckers, hummingbirds, deer, fox, black bears, and two venomous snakes: the copperhead and the timber rattlesnake. It is also home to several endangered species including the white-haired goldenrod which is found only in Red River Gorge. Plants of Canadian origin are believed to have been established in the Red River Gorge area during the Pliocene-Quaternary glaciation which started about 2.58 million years ago. [11] These plants are found in sheltered canyons of the area and include diverse species such as purple fringed orchid Platanthera psycodes, Canadian lily Lilium canadense, and Canadian yew Taxus canadensis.

Rock shelters and other sites in the Red River Gorge Geological Area contain artifacts of prehistoric occupancy by indigenous peoples, beginning with the Paleoindian period. Rock shelters are particularly valuable as archeological sites because they are protected from precipitation. Plant materials and other relics, such as woven mats and leather moccasins, that would decompose in more typical sites are well-preserved in the dry, nitrate-rich soils found in rock shelters. [3] [12] Sites in the area have yielded some of the earliest evidence of the domestication of plants found in the eastern United States. [12]

Rock climbing in The Motherlode area of Red River Gorge

The Red River Gorge is also known as a popular destination for rock climbers, with numerous cliffs in the gorge itself and in the surrounding areas. The vast number of bolted routes in overhanging, pocketed sandstone draws climbers from all over the world to "the Red" as it is known. Climbing in the region tends to be done at large number of separate small cliffs. Most climbs are a single pitch and most cliffs are less than 200 feet (61 m) tall. There are numerous traditional and sport climbing routes in region, although the latter seems to be more dominant. Many cliffs lie within Daniel Boone National Forest; however numerous important cliffs are located on private land and in two privately owned preserves created to allow climbing access:

The Red River Gorge is also known for its numerous hiking trails that range in difficulty from beginner to advanced. Over 60 miles of trails, open only to hiking, are maintained by the Forest Service and are located throughout the park (some trails are designated for horses).

the lone road through the gorge, seen from a ridge top trail

Many campgrounds are located in the area. Primitive camping, also known as backpack camping, is permitted in the gorge if an overnight permit is obtained. Camping is not permitted within 300 feet of any road or designated trail. No camping in rock shelters or within 100 feet of the base of any cliff.

One of the most popular destinations is Grey's Arch, one of the many natural arches in the park. Accessible via the Grey's Arch Loop hiking trail (4.0 miles), hikers can actually scramble up the back side of the arch, although this activity is considered extremely dangerous and can lead to injury or death. [19]

The Daniel Boone National Forest Gladie Visitor Center is located in the Red River Gorge in Stanton, Kentucky. [20] [21] The center features interpretive exhibits about the area's geology, natural history and cultural history. Visitors can get maps, information about trails, camping and other activities.