The rational numbers (ℚ) are included in the real numbers (ℝ), while themselves including the integers (ℤ), which in turn include the natural numbers (ℕ)

The decimal expansion of a rational number either terminates after a finite number of digits (example: 3/4 = 0.75), or eventually begins to repeat the same finite sequence of digits over and over (example: 9/44 = 0.20454545...). [4] Conversely, any repeating or terminating decimal represents a rational number. These statements are true not just in base 10, but also in any other integer base (for example, binary or hexadecimal).

Rational numbers can be formally defined as equivalence classes of pairs of integers (p, q) with q ≠ 0, using the equivalence relation defined as follows:

The fraction p/q then denotes the equivalence class of (p, q).

Every rational number may be expressed in a unique way as an irreducible fraction a/b, where a and b are coprime integers and b > 0. This is often called the canonical form of the rational number.

Starting from a rational number a/b, its canonical form may be obtained by dividing a and b by their greatest common divisor, and, if b < 0, changing the sign of the resulting numerator and denominator.

If both fractions are in canonical form, then:

If both denominators are positive (particularly if both fractions are in canonical form):

On the other hand, if either denominator is negative, then each fraction with a negative denominator must first be converted into an equivalent form with a positive denominator—by changing the signs of both its numerator and denominator.

Two fractions are added as follows:

The rule for multiplication is:

where the result may be a reducible fraction—even if both original fractions are in canonical form, .

Every rational number a/b has an additive inverse, often called its opposite,

If a/b is in canonical form, the same is true for its opposite.

A nonzero rational number a/b has a multiplicative inverse, also called its reciprocal,

If b, c, and d are nonzero, the division rule is

Thus, dividing a/b by c/d is equivalent to multiplying a/b by the reciprocal of c/d:

If n is a non-negative integer, then

The result is in canonical form if the same is true for a/b. In particular,

if either a > 0 or n is even. Otherwise, the canonical form of the result is

A finite continued fraction is an expression such as

where an are integers. Every rational number a/b can be represented as a finite continued fraction, whose coefficients an can be determined by applying the Euclidean algorithm to (a,b).

are different ways to represent the same rational value. 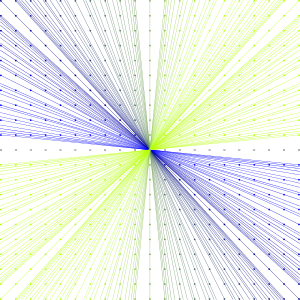 The rational numbers may be built as equivalence classes of ordered pairs of integers.

Addition and multiplication can be defined by the following rules:

This equivalence relation is a congruence relation, which means that it is compatible with the addition and multiplication defined above; the set of rational numbers Q is the defined as the quotient set by this equivalence relation, (Z × (Z \ {0})) / ~, equipped with the addition and the multiplication induced by the above operations. (This construction can be carried out with any integral domain and produces its field of fractions.)

The equivalence class of a pair (m, n) is denoted

Two pairs (m1, n1) and (m2, n2) belong to the same equivalence class (that is are equivalent) if and only if

may be represented by infinitely many pairs, since

A total order may be defined on the rational numbers, that extends the natural order of the integers. One has 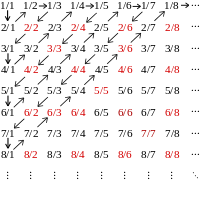 A diagram illustrating the countability of the positive rationals

The set Q of all rational numbers, together with the addition and multiplication operations shown above, forms a field.

Q has no field automorphism other than the identity.

With the order defined above, Q is an ordered field that has no subfield other than itself, and is the smallest ordered field, in the sense that every ordered field contains a unique subfield isomorphic to Q.

The rationals are a densely ordered set: between any two rationals, there sits another one, and, therefore, infinitely many other ones. For example, for any two fractions such that

are positive), we have

Any totally ordered set which is countable, dense (in the above sense), and has no least or greatest element is order isomorphic to the rational numbers.

In addition to the absolute value metric mentioned above, there are other metrics which turn Q into a topological field:

Let p be a prime number and for any non-zero integer a, let |a|p = p−n, where pn is the highest power of p dividing a.