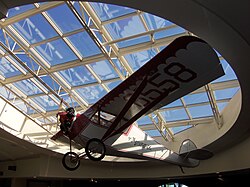 A Velie Monocoup airplane in the terminal

Franing Field, the site of the present Quad City International Airport, was picked as an ideal flying field, with 120 acres (49 ha) of level, grassy land free of obstacles. The airport made headlines right at the start, chosen as a control point for the first coast-to-coast flight in the fall of 1919. On August 18, 1927 an estimated 10,000 people came to welcome Charles Lindbergh in Moline and his famous plane, the Spirit of St. Louis on the Gugenheim tour, a cross-country commercial aviation promotion tour. In 1929 Phoebe Omlie set an altitude record above the airport in a Velie Monocoupe, the only plane ever manufactured in Moline, which still hangs in the passenger terminal. In 1947 the Metropolitan Airport Authority of Rock Island County was formed after seven townships voted to establish it. In 1957 the first count of enplaning and deplaning passengers was made with a total of 59,701 recorded. The airport underwent major remodeling in 1961 and 1968, adding everything from baggage claim to a restaurant and boarding areas. The present airport terminal was completed in 1985, after studies showed that an addition to the 1954 structure would be more costly than an entirely new terminal. The shift to the new $11 million terminal allowed expansion of airline facilities; between 1979 and 1986, the number of airlines increased from two to seven. [5]

None of the current legacy carriers fly mainline jets from Moline; the most recent mainline service was Delta Airlines A319s and A320s to Atlanta in 2013. Until 2002-03 American Airlines MD-80s flew to Saint Louis after its acquisition of TWA in the early 2000s; TWA succeeded Ozark, which started flying to Moline in 1950. (Moline's first jets were Ozark DC-9s in 1966.)

In 2001 the terminal underwent a major renovation and expansion: two new concourses, a larger baggage claim area, new restaurants and gift shops. The project doubled the size of the terminal. The Philadelphia architectural firm DPK&A designed the new concourses.

A larger U.S. Customs and Border Protection Facility was opened in 2014 in a former air cargo building. The facility processes international passengers arriving on general aviation flights. No airlines use this facility. It has a processing room, an interview room, space for agricultural inspections, office space, and holding cells for passengers who are prohibited from entering the U.S. or who are being detained and transported by law enforcement. [7] Phase two of the project will renovate the remainder of the building to create an international terminal or Federal Inspection Service, should the airport establish nonstop international charter flights. Gere-Dismer Architects of Rock Island designed the facility. 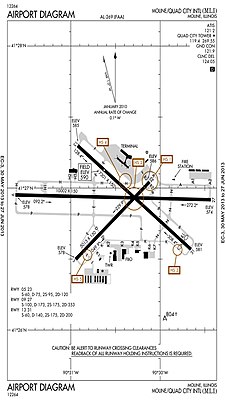 Quad City International Airport can accommodate any aircraft in almost any weather with the long runways, ILS, and high-intensity lighting. Airport officials claim that the airport is possibly capable of handling the Airbus A380. The airfield has had many changes over the past few years, including extending Taxiway Hotel. Runway 5/23 has been expanded to a usable 5,015 feet (1,529 m).

The airport's first Air Traffic Control Tower was on top of the old (1954-era) passenger terminal. The present tower, on the south side of the airport near fixed-base operator Elliot Aviation, is manned seven days a week from 0530 am to 1030 pm. At other times control of airspace is by the Chicago Air Traffic Center remoted from Aurora, Il.

The airport is designated international for having a port of entry customs service. A Foreign Trade Zone and U.S. Customs Office are located at the airport, enabling international inbound and outbound shipments. The Customs & Border Protection offices recently opened in the easternmost former cargo building. There are three cargo facilities for every available ramp and the airport has expansion capabilities. A number of air freight companies are located at the airport including BAX Global, DHL, and UPS Supply Chain Solutions. 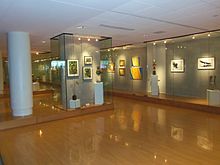 The terminal features the full-service Air Host Restaurant. There is also a full-service bar, Paradies Gift Shop, shoe shine service, and post office boxes and a mail drop. An art gallery, featuring local and regional modern and contemporary art, is located near the security check point. There is also a visitor information center near baggage claim to provide passengers local tourism information and directions. Free wireless internet ( Wi-Fi) is available throughout the airport. [12]

Beyond the security checkpoint in between Concourses A & B, there is a snack bar, lounge, bar, and a Gevalia Kaffe Coffee Shop. Located on Concourse B is a CNBC News and Gift Shop. Destination Points, a frequent flyer lounge, is available for local and regional travelers who fly approximately eight or more times, annually. There are also several work stations that passengers may utilize to set out their computers or work, and recharge their electronics.

There are two hotels on the airport property across the parking lot from the terminal. A three-story Hampton Inn & Suites opened in 2006 and a four-story Holiday Inn Express in 2014. [13] [14] In an effort to decrease the number of people circling the airport proper waiting to pick up arriving passengers a cell phone waiting area was created in 2008 adjacent to the airport's entrance road. [15] A consolidated rental car facility opened in October, 2014. The airport has a TSA office, serving administrative functions for Downstate IL airports, on the second floor of the terminal. 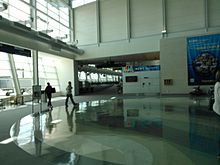 Atrium between the concourses 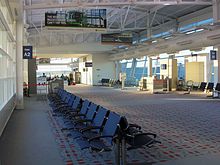 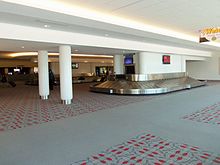