For a detailed survey of much of the material discussed here, see Rote, Santos, and Streinu (2008).

Pocchiola and Vegter (1996a,b,c) originally defined a pseudotriangle to be a simply-connected region of the plane bounded by three smooth convex curves that are tangent at their endpoints. However, subsequent work has settled on a broader definition that applies more generally to polygons as well as to regions bounded by smooth curves, and that allows nonzero angles at the three vertices. In this broader definition, a pseudotriangle is a simply-connected region of the plane, having three convex vertices. The three boundary curves connecting these three vertices must be convex, in the sense that any line segment connecting two points on the same boundary curve must lie entirely outside or on the boundary of the pseudotriangle. Thus, the pseudotriangle is the region between the convex hulls of these three curves, and more generally any three mutually tangent convex sets form a pseudotriangle that lies between them.

For algorithmic applications it is of particular interest to characterize pseudotriangles that are polygons. In a polygon, a vertex is convex if it spans an interior angle of less than π, and concave otherwise (in particular, we consider an angle of exactly π to be concave). Any polygon must have at least three convex angles, because the total exterior angle of a polygon is 2π, the convex angles contribute less than π each to this total, and the concave angles contribute zero or negative amounts. A polygonal pseudotriangle is a polygon that has exactly three convex vertices. In particular, any triangle, and any nonconvex quadrilateral, is a pseudotriangle.

The convex hull of any pseudotriangle is a triangle. The curves along the pseudotriangle boundary between each pair of convex vertices either lie within the triangle or coincide with one of its edges.

Gudmundsson et al. (2004) consider the problem of finding a pseudotriangulation of a point set or polygon with minimum total edge length, and provide approximation algorithms for this problem. 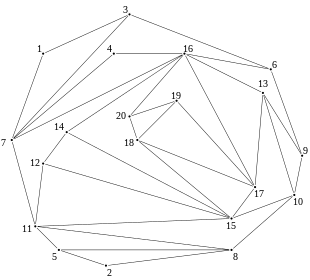 A shelling sequence of a planar point set and the pointed pseudotriangulation derived from this sequence.

A pointed pseudotriangulation with v vertices must have exactly 2v − 3 edges. [8] This follows by a simple double counting argument involving the Euler characteristic: as each face but the outer one is a pseudotriangle, with three convex angles, the pseudotriangulation must have 3f − 3 convex angles between adjacent edges. Each edge is the clockwise edge for two angles, so there are a total of 2e angles, of which all but v are convex. Thus, 3f − 3 = 2e − v. Combining this with the Euler equation f − e + v = 2 and solving the resulting simultaneous linear equations gives e = 2v − 3. The same argument also shows that f = v − 1 (including the convex hull as one of the faces), so the pseudotriangulation must have exactly v − 2 pseudotriangles.