The protected areas of Michigan come in an array of different types and levels of protection. Michigan has five units of the National Park Service system. There are 14 federal wilderness areas; the majority of these are also tribal-designated wildernesses. It has one of the largest state forest systems as well having four national forests. The state maintains a large state park system and there are also regional parks, and county, township and city parks. Still other parks on land and in the Great Lakes are maintained by other governmental bodies. Private protected areas also exist in the state, mainly lands owned by land conservancies.

Michigan contains a number of different types of federally managed lands. There is one national park, Isle Royale National Park as well as two national lakeshores, Pictured Rocks National Lakeshore and Sleeping Bear Dunes National Lakeshore. There is also River Raisin National Battlefield Park, the Keweenaw National Historical Park and the Father Marquette National Memorial, although the latter is managed by the Michigan state park system for the national government. [1] 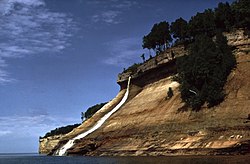 The Thunder Bay National Marine Sanctuary and Underwater Preserve preserves an area of 448 square miles (1160 km²) with 120 shipwrecks in Lake Huron and is managed jointly by the state and the National Oceanic and Atmospheric Administration. [6] 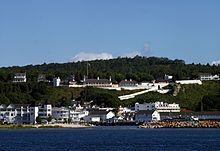 A number of different local government bodies operate parks and protected areas. These include city parks which may be no more than a green space in a city to large regional park systems like the 24,000 acre (97 km²) Huron-Clinton Metroparks. Michigan has county parks, township parks and at least one soil conservation district park among other types. Two state parks, Van Buren Trail State Park and Kal-Haven Trail are managed on the county level. Other protected areas include nature study areas owned by several colleges and universities throughout the state. The University of Michigan, for example, has the 350 acres (140 ha) Matthaei Botanical Gardens, 350 acres (140 ha) Nichols Arboretum, 777 acres (314 ha) Stinchfield Woods, and the University of Michigan Biological Station with 10,000 acres (4,000 ha) at Douglas Lake and 3,200 acres (1,300 ha) on Sugar Island. Michigan State University has the 4,600 acres (1,900 ha) Kellogg Biological Station.

A number of areas in Michigan are owned by private, non-profit land conservancies. These organizations sometimes donate or exchange land with government units and also purchase development rights from the owners of private lands. A large number exist, often with overlapping areas of operation. Many of these are open to public use, generally for nature study and some include hiking trails. According to the 2014 Protected Lands Survey conducted by Heart of the Lakes Center for Land Conservation Policy, its 27-member land conservancies have protected 588,000 acres of land in Michigan.