From Wikipedia
(Redirected from Projective configuration)
https://en.wikipedia.org/wiki/Projective_configuration
This article is about points and lines. For incidences of polytopes, see Configuration (polytope).

Although certain specific configurations had been studied earlier (for instance by Thomas Kirkman in 1849), the formal study of configurations was first introduced by Theodor Reye in 1876, in the second edition of his book Geometrie der Lage, in the context of a discussion of Desargues' theorem. Ernst Steinitz wrote his dissertation on the subject in 1894, and they were popularized by Hilbert and Cohn-Vossen's 1932 book Anschauliche Geometrie, reprinted in English ( Hilbert & Cohn-Vossen 1952).

Configurations may be studied either as concrete sets of points and lines in a specific geometry, such as the Euclidean or projective planes (these are said to be realizable in that geometry), or as a type of abstract incidence geometry. In the latter case they are closely related to regular hypergraphs and biregular bipartite graphs, but with some additional restrictions: every two points of the incidence structure can be associated with at most one line, and every two lines can be associated with at most one point. That is, the girth of the corresponding bipartite graph (the Levi graph of the configuration) must be at least six.

as this product is the number of point-line incidences (flags).

Configurations having the same symbol, say (pγ ℓπ), need not be isomorphic as incidence structures. For instance, there exist three different (93 93) configurations: the Pappus configuration and two less notable configurations.

In some configurations, p = ℓ and consequently, γ = π. These are called symmetric or balanced ( Grünbaum 2009) configurations and the notation is often condensed to avoid repetition. For example, (93 93) abbreviates to (93). 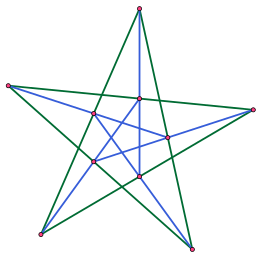 Notable projective configurations include the following:

The projective dual of a configuration (pγ ℓπ) is a (ℓπ pγ) configuration in which the roles of "point" and "line" are exchanged. Types of configurations therefore come in dual pairs, except when taking the dual results in an isomorphic configuration. These exceptions are called self-dual configurations and in such cases p = ℓ. [2]

The number of (n3) configurations

The number of nonisomorphic configurations of type (n3), starting at n = 7, is given by the sequence

Not all configurations are realizable, for instance, a (437) configuration does not exist. [3] However, Gropp (1990) has provided a construction which shows that for k ≥ 3, a (pk) configuration exists for all p ≥ 2 ℓk + 1, where ℓk is the length of an optimal Golomb ruler of order k. 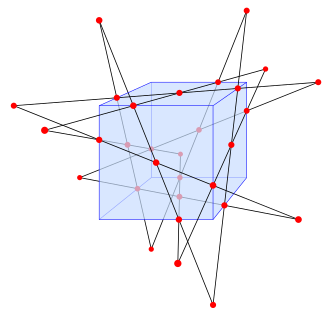 Configurations of points and circles