Professional and working class conflict in the United States Information 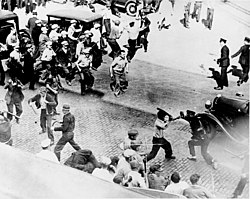 Violent confrontation between working class union members and law enforcement, as in the Minneapolis general strike of 1934 shown above, was commonly frowned upon by professional middle class.

In the United States there has long been a conflict between the working class majority and the professional class. The conflict goes back to the workers revolution and age of unionized labor in the late nineteenth century. Since the 1870s and the rise of professionalism, the daily routine of American workers has been largely designed by professionals instead of foremen.

Today, most American workers –many of whom earn middle-range incomes and work in white-collar occupations – are usually not resentful of the professionals, though a feeling of disconnect persists. Even nowadays there is a large visible discrepancy between professionals whose main job duties include visualizing and directing the day of other workers and those who carry out the orders. While the work of professionals and managers is usually largely self-directed and appeals to the interest of the individual, that of middle-range income white-collar and blue-collar workers is closely supervised and tends to greatly stray from the worker's actual interests.

Yet another reason for resentment toward the professional middle class on the part of the working class stems from the embedded feelings of anti-intellectualism. When combined working class workers seem to often be under the impression that their better paid, professional managers are not actually "doing anything" as most of their duties are to conceptualize and outline their ideas. [1]

Additionally middle-class persons may lack direct experience in relating to working-class persons outside of a formal workplace environment. Examples of interactions between both classes other than the common worker/manager interaction include that of consultations with physicians or therapists. Author Barbara Ehrenreich suggests that these relationships will often lead to the unconscious assumption of class privilege on the part of middle-class individuals in their dealings with members of the working class.

Overall working class Americans are most likely to encounter a professional middle class persons in a situation where the latter either directs or advises the former. Meaning that working class persons usually do not converse with professionals unless they are receiving instructions or being given advice. Likewise, members of the contemporary middle class are increasingly unlikely to interact with working-class persons outside of a supervisor/employee setting, and will rarely attempt to know or relate to working-class individuals as individuals. [1] [2]

PROFESSIONAL AND WORKING CLASS CONFLICT IN THE UNITED STATES